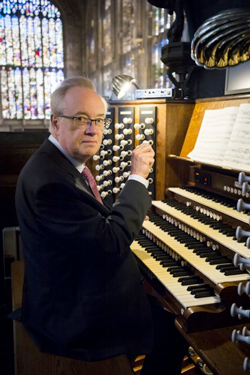 As Director of Music at King’s College, Cambridge, Stephen Cleobury presides over one of the best-known choirs in the world in the college’s famously reverberant medieval chapel, as well as over its massive organ (currently removed for a year to undergo restoration). He also maintains his own career as an international concert organist and conductor.

Cleobury was in Cleveland last weekend both as choral director and organist. He led a workshop and Evensong on Saturday for young singers at Trinity Cathedral, and played a solo recital on Friday evening, February 26, at St. Paul’s Episcopal Church in Cleveland Heights. The church was well-filled as he put its landmark Holtkamp organ through its paces.

The first half of Cleobury’s program was devoted to excerpts from Johann Sebastian Bach’s Clavier-Übung III, a collection of large and small chorale preludes based on the music of the Lutheran Mass and Catechism. A prelude in E-flat opens the collection, and a five-voice fugue in the same key closes it. In between, filled with symbolic and numerological references, the chorale preludes are fraught with contrapuntal challenges.

With its bright clarity of timbre, the Holtkamp organ was a fine instrument for these works. Cleobury’s playing was middle-of-the-road, with minimal ornamentation, sensible tempos, and appropriate registrations, but not in the vanguard of Baroque performance practice. His best playing came in the third chorale, “Kyrie, Gott heiliger Geist,” BWV 671. In spoken comments, Cleobury likened it to the Holy Ghost, the third person of the Trinity, with the melody in long pedal notes undergirding the fearsomely complicated counterpoint above.

Elsewhere in his Bach segment, Cleobury made more slips and technical errors than one would expect from a player of his reputation, marring a performance that otherwise showed solid musicianship and technique. All performers have “off” nights, and Stephen Cleobury may have been suffering the effects of jet lag — or of not quite enough rehearsal time on the organ.

Any reservations about Cleobury’s Bach playing were erased on the second half of the concert. His performances of Edward Elgar’s Sonata No. 2, Op. 87A, and excerpts from Olivier Messiaen’s La nativité du Seigneur were musical, solid, and often thrilling.

Elgar’s sonata is clearly a work of deep personal significance to Stephen Cleobury. In his remarks, the organist read from a letter he had received many years ago from his teacher Edgar Day, a friend of Elgar’s and a colleague of Ivor Atkins, organist of Worcester Cathedral for over 50 years. With Elgar’s approval, in 1933 Atkins transcribed portions of Elgar’s Severn Suite for brass band, creating the Organ Sonata No. 2. Atkins interpolated his own cadenza near the end.

The relatively brief sonata is in three sections (Introduction, Toccata, and Fugue) performed without pause. Only the march-like rhythm of the Introduction betrays the origins of the work. Atkins’s arrangement is skillful, showing off the resources of the organ. Although St. Paul’s Holtkamp instrument doesn’t match the sounds of the great English cathedral organs, Stephen Cleobury used its more Germanic/American colors imaginatively and fluently. The piece is worthy of more frequent performances, and Cleobury was an eloquent advocate.

Stephen Cleobury chose six of the nine movements of Messiaen’s 1935 suite La nativité du Seigneur (The Nativity of the Lord) to close his concert. Those six relate to the human part of the Christmas story: Jesus and his mother, the shepherds, the people on Earth (“the children of God”), the angels, the Magi, and finally Jesus coming to Earth as “God among us.”

Messiaen’s printed registrations are idiosyncratic, but Cleobury found colorful and effective substitutes. His somewhat slower tempo choices showed his familiarity with large, reverberant spaces such as those of King’s College Chapel without detracting from his beautifully phrased and colorful performances. His playing of “Les Anges” (The Angels) was sparkling and rhythmic, with its depiction of the wings of the angels and their final disappearance back to heaven. “Les Mages” (The Magi) was deliberate, the star gleaming above the music of the slowly-trudging caravan. The opening of “Dieu parmi nous” (God among us) was majestic. The second section, in which the main theme is presented above an intricate river of flowing notes and staccato pedal punctuations, was precise. In the finale, the theme appears in the pedal below typical French toccata figurations.

Though the toccata might have been even more thrilling a notch or two faster, it did not sound like a race to the finish — as is the case with some performers. Here, as in earlier parts of his program, Stephen Cleobury gave a performance that was solidly under control and satisfying in interpretation.

END_OF_DOCUMENT_TOKEN_TO_BE_REPLACED

The Orpheus myth inspired French Baroque composers Jean-Philippe Rameau and Philippe Courbois to write expressive solo cantatas about the famous Greek musician-poet and his futile attempts — because of his own impatience — to rescue his beloved Eurydice from the grasp of Pluto in the Underworld. These are beautifully performed by the clear-voiced soprano Hannah De Priest and the velvet-throated baritone Jonathan Woody (who makes a walk-on appearance in the Rameau). END_OF_DOCUMENT_TOKEN_TO_BE_REPLACED

Now that live concerts are beginning to proliferate, it was delightful to hear Oberlin cello professor Darrett Adkins ring a change on the solo suite format with his Hypersuite No. 3 on September 28 in the Cirigliano Studio Theatre at Lorain County Community College. His program opened the new season of Signature Series performances in Elyria, and was dedicated to the memory of Eva Hornyak. END_OF_DOCUMENT_TOKEN_TO_BE_REPLACED