On Friday, March 31 at 7:30 pm, Oxford’s New College Choir will make a stop at Trinity Cathedral for a concert including both Anglican Church Music favorites and new works as part of the Choir’s six-city American tour.

The choir of boys and men dates from 1379, when William of Wykeham, the founder of Winchester College, established an educational outpost named The Warden and Scholars of St. Mary’s College of Winchester in Oxford. That title being both unwieldy and confusing (there was already a college of St. Mary in Oxford), the institution soon came to be known as New College.

New College Choir now has a relatively new director in Robert Quinney, who in 2014 replaced Edward Higginbottom after the latter’s four decades serving New College. Quinney assumed the directorship of the 30-voice ensemble after an organ scholarship at King’s College, Cambridge; an assistantship at Westminster Abbey (where he played for the wedding of Prince William and Kate Middleton); and a brief tour of duty as organist of Peterborough Cathedral. 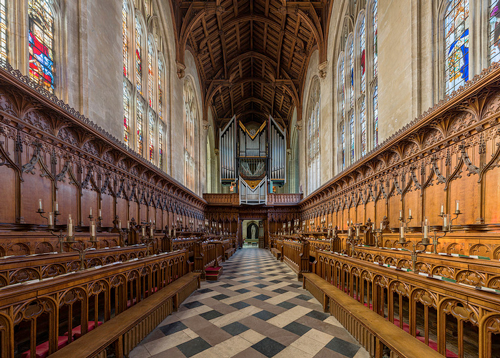 “It was quite a thing to take on,” Quinney said in a telephone conversation from his office in Oxford. “But the choir was used to being held to very high standards and used to doing all kinds of interesting things musically. I feel very lucky that I had that sort of inheritance.”

That inheritance includes the ensemble’s discography of more than 100 CDs, its worldwide reputation through tours and broadcasts, and its distinctive sound that makes the choir instantly recognizable from its peer ensembles. That may change slightly under Quinney’s watch, but not radically. “Because Edward and I are different people, the Choir is going to sound a bit different,” he said. “It would be rather odd if it didn’t.”

Part of that difference has to do with repertory. “Edward’s very deep affinity for French Baroque music found its way into the Choir’s rhythm,” Quinney said. “My interest is in the German Baroque — Bach and his predecessor Heinrich Schütz. Just move a couple hundred miles to the east, and that’s where I feel most comfortable.” 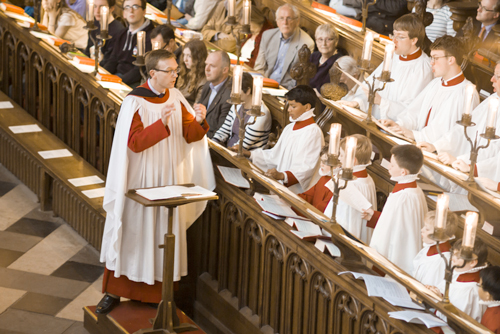 The Choir’s repertory serves its principal function of singing evening services six days a week during the College’s eight-week terms. Unlike other University choirs, New College choristers rehearse at lunchtime rather than early in the morning. “Then every day at 4:30, the boys put on their gowns and mortarboards and walk across the road from New College School for tea — sandwiches and cakes,” Quinney said. The boys then join the men — who are choral scholars in the College — for a rehearsal at 5:15 pm, and sing Evensong or Choral Eucharist at 6:15 pm. (Click here for information about weekly webcasts of services.) 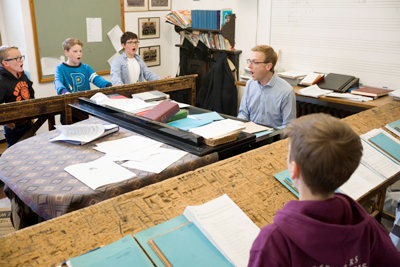 “I first performed Ruth Byrchmore’s A Birthday at Westminster Abbey in 2004,” Quinney said. “It sets a colorful, Pre-Raphaelite poem by Christina Rossetti about waiting for a beloved to arrive. It’s unusual for us to sing non-liturgical music, but the text of this one make it suitable for use during Advent.”

Quinney asked Matthew Martin, a colleague who is organist of Oxford’s Keble College, to write a special piece for the Choir’s 2015 visit to the Vatican to sing with the Sistine Chapel Choir. “There were requirements: the piece had to be sung at the Offertory at Mass, last no longer than four minutes, and set an English text on the subject of church unity,” Quinney said. Despite its Latin title, Ut unum sint (“That they might all be one”), Martin did set the text from the Gospel of John in the Choir’s mother tongue. 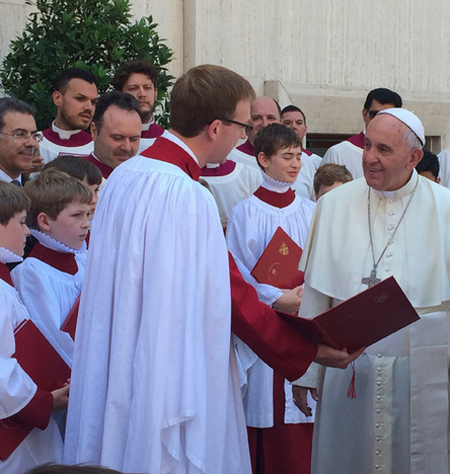 The newest work on the program, Toby Young’s O God, make the door of this house was written last fall for the welcoming ceremony of the new Warden of the College. “The text, asking that the College be welcoming to all, is by Thomas Ken, a 17th-century Fellow of New College,” Quinney said. “It made an instant impact with its pop rhythms, asymmetry, and ostinatos. The choristers were walking around the college singing it.”

Quinney’s ‘day in the life’ at Oxford is different from his schedule at Westminster Abbey and Peterborough Cathedral. Some might think it easier, but think again. “Cathedral organists would say, ‘You know, those people at Oxford only have very short terms,’” Quinney said. “It’s certainly true that we don’t sing at Christmas and Easter, which fall during vacation, but we do a daily service apart from Wednesday, so we’re pretty busy.” 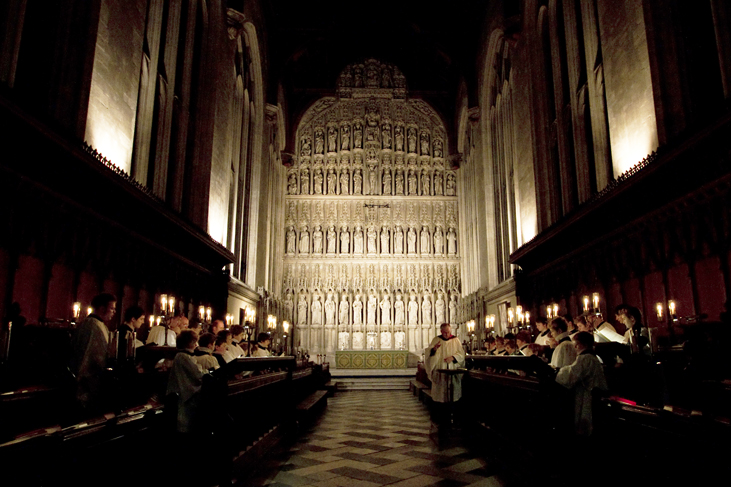 As a Fellow in the University, Quinney also holds tutorials in the College, and lectures and examines students in the University’s faculty of music. He is also expected to engage in research, an activity that has recently taken him to the Bodleian Library to examine the autograph scores of Charles H. H. Parry’s 1918 motet collection, Songs of Farewell. A new edition is planned to mark the centenary of Parry’s death. Quinney also tries to steal a bit of time every day to practice. “I am called the ‘Organist’ of New College, so I should be expected to play a hymn now and then.”

Although recruiting boys for the Choir has its challenges, Quinney thinks the old idea that singing is for girls while playing sports is a manly occupation is changing for the better. “Boys these days are more sophisticated about negotiating gender lines,” he said. “They flourish when working together as a team, and there’s a direct analogy there between sports and choirs.”

With a son of his own in the New College Choir, Quinney sees choral issues both from a professional and a parental point of view. “I find myself being a father and a teacher at different times,” he said, adding that his daughter sang in his girls’ choir at Peterborough. “It’s wonderful to be able to share my love of music in a very direct way with my children.”

END_OF_DOCUMENT_TOKEN_TO_BE_REPLACED

Today’s touring string quartets hew to so uniformly high a standard that it’s often little individual touches that make ensembles stand out. The Polish musicians who make up the Apollon Musagète Quartet showed up at Plymouth Church in Shaker Heights for their debut on the Cleveland Chamber Music Society series on February 4 in matching plaid suits and black shirts. And jettisoning their jackets, they played standing (except for the cellist). END_OF_DOCUMENT_TOKEN_TO_BE_REPLACED