Yes, you read that correctly. During each performance, an approximately 4 billion year-old rock — found during a geological dig in Alberta, Canada — will hang from the gallery ceiling while the vocalists whistle and breathe, subtly moving the Hadean-period rock like a pendulum.

“It sounds weird, but Lifespan really is a beautiful piece, and I think the title captures why,” The Crossing’s conductor Donald Nally said during a recent telephone conversation. “The rock is from the time when the earth was formed, but it’s like only a quarter of the age of the universe. Yet, when you put a thirty-something-year-old singer next to it, the span of that person’s life is completely insignificant compared to the immense span of the rock.” 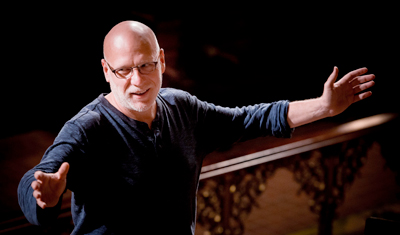 Nally said that during a performance a meditative place is created for listeners as they watch the singers and the rock, and lose themselves in the sounds that are happening in the room. “It leaves you really thoughtful, and there are moments in it that are quite violent as the singers force their breath out of their bodies. What we found interesting during the premiere at the Philadelphia Museum is how many people came back several times to hear it again. People loved it, and they wanted to talk to the artists and ask them how they did it.”

During a performance of Lifespan, it may appear that soprano Rebecca Siler, tenor Steven Bradshaw, and bass Colin Dill are improvising, but Nally said they are not. “The piece is written in cells — there’s one event, then another, and another. There’s also something ritualistic about it, and I think people crave that kind of connection. So being in the room and close to the performers, and being able to move around the room gives the feeling that you are part of it. It’s happening in front of you, but also happening with you.”

Nally said that Jennifer Allora’s and Guillermo Calzadilla’s choice of David Lang as their collaborator for the project was a great one. “He’s really a thoughtful and inquisitive artist. The piece has a logical structure and form that you are aware of even during the first listening. And it takes a master composer like David to accomplish that. With a concept like this, you could get it really wrong and it could turn into an overtly performance art type of piece, but this doesn’t feel like that at all.”

The cimbalom was the feature of the show, an instrument capable of taking on many personas. Its performer, Chester Englander, has shaped his career around the instrument, and has inspired composers to write more repertoire for it, some of which was presented on the program. END_OF_DOCUMENT_TOKEN_TO_BE_REPLACED

You wouldn’t expect that acoustic from a glance at the nave, which is wide and long, but not especially lofty. But when I guest conducted a local amateur choir and professional orchestra in Beethoven’s Mass in C there a few years back, during the first rehearsal we released the final chord of the “Gloria” and listened in astonishment for the next several seconds. The sound continued to roll down the space like the big wave that surfers dream about. END_OF_DOCUMENT_TOKEN_TO_BE_REPLACED