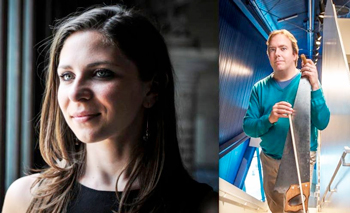 When is the tempo of a waltz too slow? For composer Christopher Auerbach-Brown the answer may well be never, as was evident during the first full performance of his 2014 work titled The Slow Waltzes at the Bop Stop on Sunday, June 12.

The six-movement composition, dedicated to his family, received a splendid performance by pianist Brianna Matzke, who for nearly 50 minutes brought a sense of refinement, flair, and technical prowess to the composer’s idiosyncratic writing.

Auerbach-Brown’s program notes detail the musical and metaphorical aspects of the piece:

Initially, the title to the work — The Slow Waltzes — outlines the basic premise of the piece, evoking a feeling of dancing in slow motion. On a deeper level, the music is a paradox, one of moving effortlessly and maintaining a calm exterior while facing great difficulty and struggle.

Although these notes give the listener a better understanding of the piece, both composer and performer made the very wise decision to let the music speak for itself, and leave their spoken comments about the work for the audience talk-back that followed the performance.

The opening, “Slow Waltz #1,” is exactly what the title implies. The movement is a series of slowly played single notes and simple chords that fade into silence. Matzke did a wonderful job of providing an illusion of 3/4 time with so little happening in the score.

The following “Interlude” offered up an abrupt change of mood. Beginning with very loud chords, the work suddenly throws listeners into a concert of ringing Cathedral Bells. Matzke’s voicing of the chords and astute use of pedal were excellent.

“Slow Waltz #4 — to Caleb,” Auerbach-Brown’s son, is characterized by loud, then soft quarter and half notes. The concluding “Postlude — to Caroline,” his daughter, is full of fast flourishes in the upper register of the keyboard, which the pianist playfully dispatched with style. A series of high, repeated single notes fades away, bringing the waltz adventure to a calm, satisfying conclusion.

The audience learned during the talk-back that the decision to use minimal amplification and reverberation was to prevent the very long notes from decaying too quickly. (However, there were many times during the performance where the sound became blurred, especially during louder passages in the piano’s high register.)

The audience also learned that Auerbach-Brown does not think of the work as fodder for choreography. Personally I think the waltzes cry out for the inclusion of movement. In any case, composer and performer proved that slow waltzing can be fun.

END_OF_DOCUMENT_TOKEN_TO_BE_REPLACED

Concerts cancelled in 2020 may have put a brief gap in Ling’s record with the Orchestra (a program every season since 1984-1985), but the ensemble’s former resident conductor more than made up for it Sunday with a performance both commanding and personal. END_OF_DOCUMENT_TOKEN_TO_BE_REPLACED