Thanks (or no thanks) to the pandemic, Arts Renaissance Tremont will open its new season in mid-winter rather than the fall, and due to other circumstances will move its performances from Pilgrim to St. Wendelin Church. The series will also be under new management: the Cavani Quartet will take over its artistic leadership following the passing of its founder, Christine Haff-Paluck.

On Sunday, February 20 at 4:00 pm, pianist Michelle Cann will join the Cavani in a program of piano quintets by Johannes Brahms and Florence Price. Admission is free, but offerings will be gratefully accepted.

Cann, a graduate of the Cleveland Institute of Music who is on the faculty of the Curtis Institute in Philadelphia, is treating her visit as something of a homecoming.

I chatted with her earlier this week on her mobile phone while she was driving from Santa Rosa to San José in California for a recording session with a flutist friend. (Not to worry: Bluetooth was operational.)

Born and raised in Florida, by the age of 18 she had taken up a variety of instruments — trombone, violin, steel drums, bells, guitar, tuba, and organ, in addition to piano. I began by asking her what drew her from Florida to Cleveland. Surely not the weather.

“The biggest draw was definitely Paul Schenly at CIM. I was impressed by my lesson with him when I was in high school, and just simply because he was very interested in me as a student and pianist, and he really cared about trying to make things work. I couldn’t afford the scholarship that was originally offered. Another school was going to give me more money, and he really advocated to get the scholarship increased, and I was able to come to CIM. So I definitely have him to thank in a big way.”

She also studied with Daniel Shapiro. “Midway through my first year, Schenly started coming less frequently and began sharing his students with other teachers. That actually was really nice because it created a good environment. Instead of feeling competitive — my studio’s better than yours — everyone just tried to bring each other up.”

Cann said that she really liked the environment at CIM for pianists at that time, and her experience with Shapiro blossomed into a great student-teacher relationship that remains a friendship to this day. Both he and Schenly brought different things to her development, “and that was great for building a well-rounded musician.”

Another important asset at CIM was the resident string quartet, the Cavani. “A big part of this concert is staying connected with them,” Cann said. “Annie Fullard is the only original member left, but she and the other members at the time coached me frequently. I went to school with Eric Wong, the current violist, and with Catherine Cosbey, the second violinist. So this is going to be a nice reunion of sorts.”

It will also underline the relationship between the musicians and composer Florence Price, whose music was only introduced to Cann in 2016. “Now that her name is really going around, I think if you asked, ‘Hey, who’s a Black woman composer you know?’ most people would name Florence Price. But in 2016, that was not the case.” 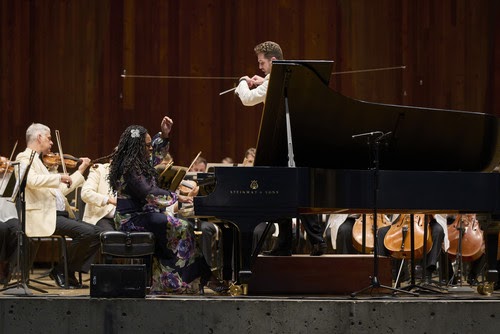 Price’s Piano Concerto was the first work that Cann discovered when she was invited to play the piece with the Dream Unfinished Symphony in New York. “I remember being shocked that this was my first introduction,” she said. “I thought, she wrote this in the ‘30s — why have I never heard of her?” Blossom Festival audiences got to hear the piece last July when Brett Mitchell led a performance by Cann with The Cleveland Orchestra (pictured above — read Timothy Robson’s review here).

Cann lamented that she had few role models growing up. “There weren’t that many Black composers or Black pianists who had built really big careers. And none of the conservatories were highlighting Black composers. Price really could have inspired so many people.”

Sunday’s concert pairs Price’s music with that of Johannes Brahms. How do those two figures come off programmed back to back?

“I think they work very well together,” Cann said. “If you get to know Florence’s music, there are pieces that exhibit various inspirations and influences. In one aspect, you hear a very classical form of deep Romanticism seeping through her sound. The Black American idiom also constantly makes appearances through dances, early jazz and ragtime, Spirituals, and religious music.”

Michelle Cann now has her eye out to discover other Black female composers whose works have been overlooked or just lost. She noted that if composers were ignored by not having their works published during their lifetime, it’s next to impossible to find their music now. “As much as we have, we’re still missing a lot of Florence Price’s works,” she said.

“One person I’ve been exploring is Eugenia Helen Hagen, who was the first Black female to graduate from Yale. She played her Piano Concerto with the New Haven Symphony, but all that’s left of it is a two-piano reduction of the first movement. I just performed it with the New World Symphony last week. It’s about 15 minutes long, very beautiful, and was well-received.”

Price’s concerto suffered a similar fate. “All they could find was the two-piano arrangement,” Cann said. “Trevor Weston orchestrated it. Then a couple of years ago, someone at an auction found the actual conductor’s score, so now there’s a whole new version that everyone’s playing.”

I asked Michelle Cann what she did to preserve her sanity during the lockdown? “Like everyone else, I went through various stages of coping mechanisms. The beginning was hardest for musicians because this has never happened in our lifetime — where a worldwide event could shut everything down,” she said.

“I played the piano here and there, but for two months I really didn’t practice. I’ll be honest, I didn’t have any motivation. Once the summer came and the virus didn’t go away, I had to find some reason. The pandemic taught us to practice just because we love music and our instrument.”

Laughing, she added, “At one point, I actually started delivering food. I thought, there’s not much face to face contact, I can make some money, and be outside my apartment. It was huge for my sanity, it really was.”

Not everyone saw the logic. “People let their egos get in the way. I told some people and they said, ‘Oh, Michelle, delivering food! You’re a big pianist and teacher.’ I said, ‘I’m sorry, I lost all my concerts. What exactly is the problem with making money in whatever way I need to right now?”

At that point, Cann had reached the Golden Gate Bridge — a good moment to bring a very pleasant conversation to a conclusion.

END_OF_DOCUMENT_TOKEN_TO_BE_REPLACED

The strings-only work by Berg has made relatively frequent appearances on the Orchestra’s programs. In 2021, the musicians recorded it for the In Focus series, and it appeared again on last year’s European tour. Friday’s rendition maintained the group’s characteristic light and effortless playing, each section blending as much as possible to echo the work’s original form as a string quartet. At fifteen minutes total, the piece is quite short, but the dense encoded musical meanings require some extra-attentive listening. Splitting up the three movements ensured that each one could be appreciated on its own. END_OF_DOCUMENT_TOKEN_TO_BE_REPLACED