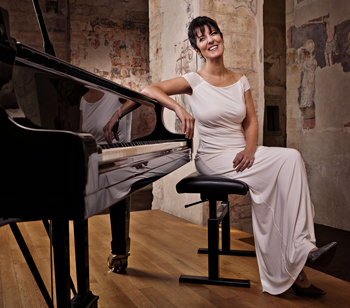 Like many first-generation Americans whose families had been forced to leave their homes because of Nazi atrocities during World War II, pianist Sandra Shapiro grew up not fully understanding the circumstances that led to her father’s arrival in the United States.

“I grew up in Milwaukee but moved away to study at Juilliard when I was fourteen,” Shapiro said during a telephone conversation, “so my relationship with him did not go beyond that until the very end when he was dying, and then it was too late to ask questions. When you’re fourteen you don’t think about your parents’ lives — they’re just your mother and father. Sadly, I was not interested, and he didn’t talk about his past. There was a sense of taboo to even talk about those years.”

Shapiro’s quest to discover her father’s past has led to the creation of her four-concert project, Musical Roots: an exploration of cultural heritage and influences. The first installment, “In My Father’s Footsteps — a daughter’s search for answers,” will be presented on Wednesday, March 21 at 8:00 pm at the Cleveland Institute of Music’s Mixon Hall. Shapiro’s musical documentary will include works by Liadov, Chopin, Rachmaninoff, and Schubert. The concert is free, but seating passes are required. Call 216.795.3211.

The genesis of Shapiro’s project can be traced back to 2004 when her mother found an old letter written to the pianist’s father from a Moscow address. “I wrote to that address but didn’t receive a reply until a year later when I did receive a letter posted from the former East Germany,” Shapiro said. “The letter that I sent to Moscow found its way there.”

Shapiro said that her search for answers revealed her father’s many roles and adventures, from medic in the Russian Army during WWII, to serving as a doctor in a Displaced Persons camp in Berlin’s Russian sector, to a daring escape from Stalin’s clutches to Foehrenwald camp in the American sector. After spending time in Argentina, he moved to Israel, and finally to the United States.

“My father was born in Russia in 1923, the year that it officially became the Soviet Union,” she said. “Public records from that time are a mess because the area in which he was born changed hands so many times — it went from Russian to Romanian, to German, back to Russian, then to Ukraine, so it was difficult to find anything.”

The pianist said that when she began her journey, she was not thinking about an end project — she was simply trying to learn more about her father’s past. Then came the 2016 presidential election. “I was upset about what was being said about immigrants and was thinking that if it weren’t for my immigrant family, I wouldn’t be here. I certainly would not have had the same opportunities, and it is my cultural heritage that has shaped me. I thought, I need to find a response to all of this.”

Until April of last year, Shapiro’s discovery process led to many dead ends. “I was playing at Carnegie Hall when I got an email from a Phyllis Beren. She said she was writing her memoirs and that she wanted to devote a chapter to my father. She lived in New York and saw advertisements for the concert. She remembered that my father had a daughter who played the piano and thought that maybe I was she.”

The two did get together and Beren told Shapiro about her memories of the pianist’s father when she was a girl in the Foehrenwald DP camp. “I told her that she must be mistaken because at the time he was in Berlin serving as a medic in the Russian Army. Beren said, ‘No, my mother is Sonia Lerner,’ and I thought, she is right. That is the family we visited in Skokie when I was a child. My brother and I knew my father had escaped, and we thought he went directly to Argentina. But we were wrong — he first went to an American base and they placed him at Foehrenwald, where he became the Lerners’ family doctor. We talked for hours. I saw photos of him and postcards that he had sent from Africa when he was on the ship to Argentina. He wrote in German — and I never knew he spoke German.”

Shapiro will begin her musical tributes to her father with Anatoly Liadov’s Two Mazurkas, Op. 15 and Mazurka rustique, Op. 31, No. 1. “Liadov is not well known in this country but is very well known in Russia. When I discovered that my father was in an American DP camp and his closest friend — who was married to Sonia Lerner — was Polish, as were many of his other friends, mazurkas made perfect sense because they’re Polish dances. My father was also an accomplished accordion player, and when I learned that he played while people sang and danced, I thought, there we go.”

Chopin’s Barcarolle in F-sharp, Op. 60 pays tribute to her father’s journey by boat to Argentina. “He wrote postcards to his Polish friends on a ship — Chopin is Polish and a barcarolle is a boat song. I had to include a major work by a Russian, so I chose Rachmaninoff’s Variations on a Theme by Corelli. My father is also buried in the same cemetery as Rachmaninoff in Valhalla, NY. When I go to visit my father’s grave I also pay my respects to Mr. Rachmaninoff.”

Schubert’s Sonata No. 21 in B-flat, D. 96 pays homage to Shapiro’s father and his friends’ pursuit of a better life. “This piece speaks to the triumph of the human spirit.”

Shapiro explained that she and her father experienced a “deep bonding” around the Schubert Sonata. Near the end of his life her parents moved to New York to be closer to her brother, who was doing his medical specialization while she was pursuing her Artist Diploma at Peabody. “Their apartment had a spinet piano, and for my next recital program I needed a Schubert sonata. I was reading through this one when my father left his bed and came into the living room and asked what the piece was. I said that it’s Schubert, and he asked me which one. I said it was his last sonata. He said it was beautiful, then he lay down on the couch and fell asleep. When he woke up he asked if I would play it again. It was only about a week and a half after that he passed away.”

Shapiro said that her journey has been both beautiful and cathartic. “It’s brought me so much joy, as well as the realization that he was an extraordinary man.”

END_OF_DOCUMENT_TOKEN_TO_BE_REPLACED

Rodgers & Hammerstein’s Cinderella was originally produced for television in 1957 — seven years after the animated Disney film was released — and starred Julie Andrews. According to the Rodgers & Hammerstein website, it was viewed by over 100 million people. END_OF_DOCUMENT_TOKEN_TO_BE_REPLACED

The story line has its origin in an 1855 play and an 1842 farce that Thornton Wilder mined for his 1938 play The Merchant of Yonkers. When that turned out to be a flop, in 1954 Wilder made the crucial decision to re-center the show around the character of the legendary marriage broker Dolly Gallagher Levi and renamed it The Matchmaker. END_OF_DOCUMENT_TOKEN_TO_BE_REPLACED

The Dodero Center for the Performing Arts at the Gilmore Academy in Gates Mills is one feature of an impressive campus. The auditorium is shallow, the stage is deep, and the ensemble played without a shell. Throughout the program, the sound, especially in instruments’ lower registers, tended to disappear. END_OF_DOCUMENT_TOKEN_TO_BE_REPLACED