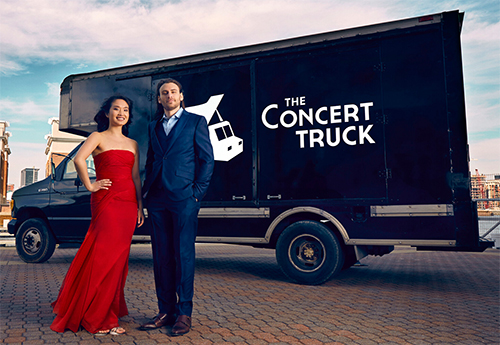 When award-winning pianists Nick Luby and Susan Zhang were searching for a way to use their musical training to give back to the community, an interesting question arose: does a mobile concert hall exist?

Enter The Concert Truck, a 16-foot box truck that transforms into a fully functioning mobile concert hall complete with lights, sound system, and piano. Anywhere that Luby and Zhang can park the truck can turn into a concert venue.

As part of Piano Cleveland’s PianoDays @CLE, the Concert Truck will be coming your way. On Tuesday, August 2 at 12-noon you’ll find it parked at 50 Public Square in Cleveland and at 6:00 pm it will be at the Julia De Burgos Cultural Arts Center. The Truck is in town until August 6. A complete list of stops is below.

I spoke to Nick Luby by phone and began our conversation by asking him why he and Susan decided to create The Concert Truck?

Nick Luby: Susan and I were trying to figure out how to use our training to give back to the community in a positive way. Historically, classical music has been more for the wealthy and there is a disconnect between classical music and much of society. So we wanted to do something that was meaningful.

One summer when I was traveling with relatives, I would practice in churches. And one day I looked up and saw that a dozen people had wandered in and were sitting in the pews listening. Once I noticed them I started performing more than practicing. But It was a special experience — we talked and we were all grateful to share the spontaneous experience of music making.

After that I saw spaces differently. In all of the cute marina towns we visited I thought “that’s a perfect place for a concert.” So I started wondering if there was such a thing as a mobile concert hall.

I started Googling and was shocked that I couldn’t find anything. So I began to think that if I was going to do this, what would a mobile concert hall look like? What kind of building can move? A truck. I told Susan about the idea and she said we have to do this. This was in 2015.  Susan had more experience with entrepreneurship than I had at that time, so she knew what to do. We wrote down our ideas and started to apply for grants and awards.

Mike Telin: How did the grantmakers react to the idea?

It was interesting because at the time we had nothing to show them — I think they funded us mostly out of curiosity.

MT: Did you have trouble finding the technical advice you needed to create the truck?

NL: That was a challenge. We’re both pianists and didn’t know how to design and build a mobile concert hall. But several friends, including John Hunsinger, the stage manager of the South Carolina Philharmonic, heroically stepped in to help us with our first prototype which was a big wooden stage that rolled out of a Budget rent-a-truck.

Susan had friends including an audio engineer, a videographer, and an architect, so we had a lot of help from a lot of different people.

MT: How have people who are encountering it for the first time reacted?

NL: As you can imagine there’s been a range of reactions from surprise to  bewilderment. But people are tickled to unexpectedly see a concert happening in the middle of their neighborhood or in the town square.

More and more people are looking forward to it because they’ve seen promotional materials. So now we often already have an audience when we arrive.

MT: This is a great mechanism for community building — can you give an example of how The Concert Truck strengthens relationships between arts organizations and the communities they serve?

NL: One memorable event was with the Dallas Symphony. Like many places in the country, Dallas has a rich and complex history. For many years a neighborhood in south Dallas was a site for dumping hazardous materials.

For years the neighborhood had petitioned the city to take action, so it was such a huge win for them when it was finally cleaned up. We played a concert with some symphony members in front of Marsha Jackson’s house to commemorate the cleanup. It was a wonderful celebration and full of emotion. And to have the Dallas Symphony partner with the concert truck was very special.

[A Washington Post article sheds light on the environmental nightmare that residents had to endure. A second WP article highlights the concert.]

Most arts organizations have a home of some kind where they can  put on performances. And most want to be able to serve their whole community but many people have problems getting to an organization’s home. And the Concert Truck is a way for organizations to extend activities into their communities and to meet people where they are. So people can get to know Piano Cleveland for example. 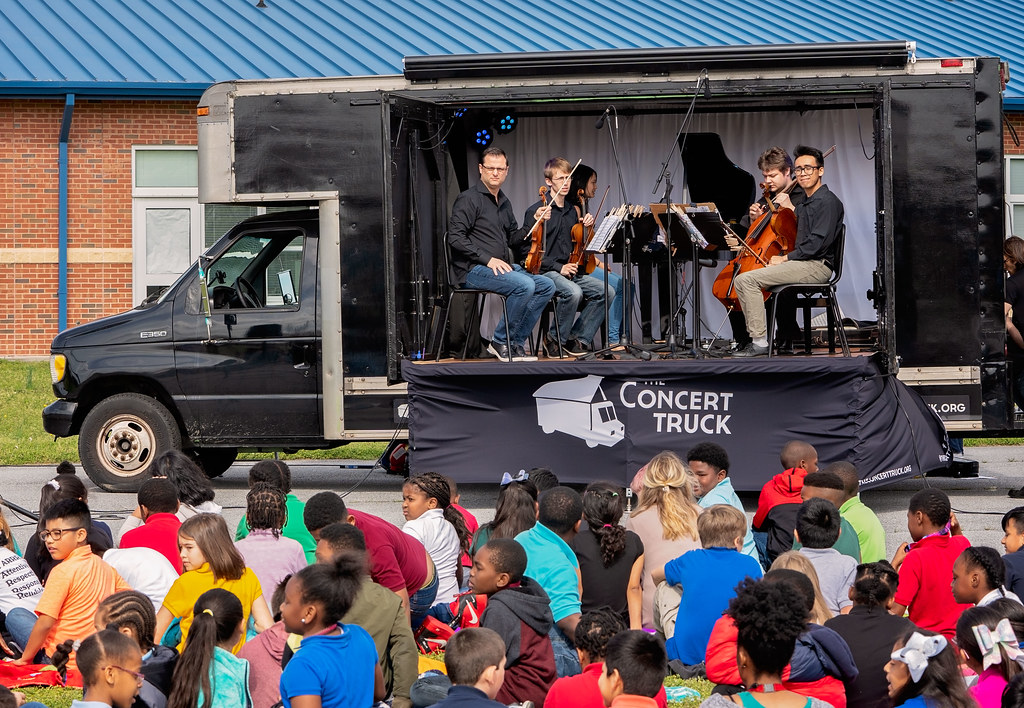 MT: Speaking of Piano Cleveland, in a situation such as PianoDays where there will be a number of performances in different neighborhoods, how much and what kind of prep work do you do?

We’ve been in conversations with Piano Cleveland, and it’s great that there are community leaders who are co-hosting with us because a wonderful way to get to know a place is through those relationships. Humanity is beautiful and this is a cool thing to be able to do.

MT: How much does your repertoire vary from situation to situation?

NL: We have pieces that we love and represent the diversity of our audiences. And with the places we visit we’re able to do musical collaborations outside of our duo.

We like to let the artists we collaborate with lead the way. I know in Cleveland we’ll have some collaborations that combine music and storytelling and we’re planning some great things for the Asian Lantern Festival.

We have a rep list that works well in a variety of settings — I don’t think we’ve ever had a mid-performance flop. But usually we can read the crowd. If it’s rowdy or in a noisy area we might not play something that is slow and soft. Although I’ve been surprised by how a moment of calm in music can bring people in. 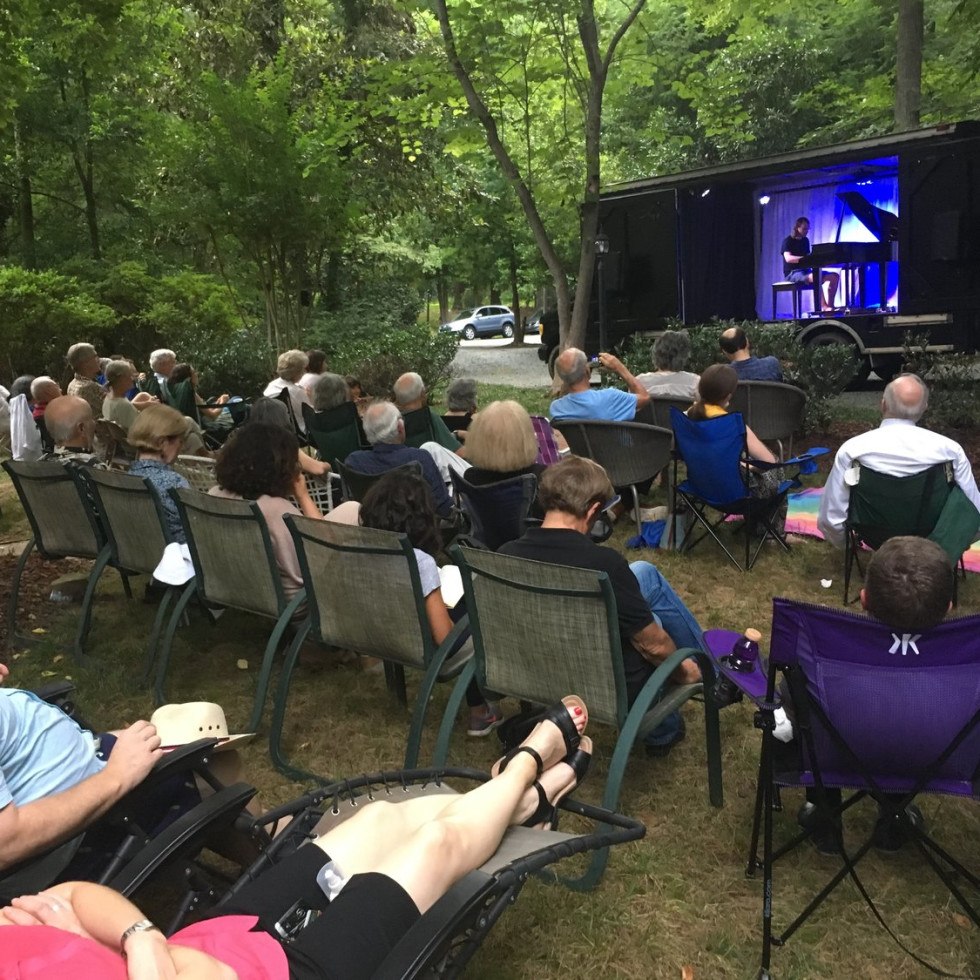 All performances are free.

END_OF_DOCUMENT_TOKEN_TO_BE_REPLACED

Supported by engagingly, yet simple staging by Cara Consilvio, a well-prepared cast of singers told the archetypal story of Cinderella with charm and flair. Framing the production was  a sparse but colorful set and wonderful lighting by Dave Brooks. END_OF_DOCUMENT_TOKEN_TO_BE_REPLACED