Deep in the Huayin County in northwest China’s Shaanxi Province, in a rural village at the foot of Mount Hua — it was there that pipa player Wu Man first heard the Huayin Shadow Puppet Band, a family of farmers with an artistic tradition over 300 years old, passed down through generations.

On Wednesday, March 21 at 7:30 pm at the Cleveland Museum of Art’s Gartner Auditorium, Wu Man will combine her virtuosity on the pipa with the Huayin Shadow Puppet Band’s unique blend of sounds — shouting vocals, lutes, fiddles, traditional instruments like the yueqin, banhu, and erhu, clappers, small and large gongs, and the battering of a wooden bench. Together they’ll sing and play about life in remote China through old-tune traditional music with shadow puppetry.

Wu Man described the music of the Shaanxi Province as a far cry from the elegant, urban, tea-house style that is popular where she grew up, in Hangzhou, Zhejiang, near Shanghai.

The Shadow Puppet Band’s music is “wild and very dramatic,” she said by phone. “They play outdoors — for weddings, for the village market — so it’s loud. And their stories are always about ancient battles — stories we all know, which are very popular in China.”

What brought Wu Man to that small village in Shaanxi was research: she was preparing to curate two concerts for the Ancient Paths, Modern Voices festival, held at Carnegie Hall in 2009 to celebrate Chinese culture. Not only would the group go on to perform at that festival, but they would also be filmed for Wu Man’s 2012 documentary Discovering a Musical Heartland. (You can see the group perform here in that 10-minute documentary on YouTube.)

“New York in 2009 was the first time the group had ever traveled out of the country, or even out of their small village,” Wu Man said. Since then they’ve been invited to Sydney, Hong Kong, and Beijing. “This is their second time in the U.S., but with a much bigger tour — twelve cities.” 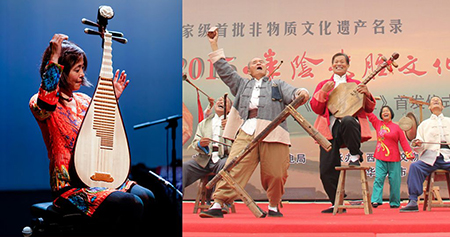 This tour has come with some practical travel concerns for the Shadow Puppet Band. “They’re sending me messages like, ‘What do you think we should bring?’” Wu Man said. “They’re excited and nervous. It’s a long trip — they have to take a train to Beijing, and then a flight to the first city of the tour, in Utah, and they’ve never been to that area. But it’s great to have these traditional music concerts not only in big cities like New York and Los Angeles, but also in smaller towns. I think that’s very meaningful for us on this trip.”

When the group performed at Carnegie Hall, they still went by their former name, Zhang Family Band. For many years, their tradition was kept strictly within the Zhang family line. “They wouldn’t allow other families to come in and learn the tradition,” Wu Man said. “But in the 20th century, especially the ‘50s and ‘60s, they started teaching others. This time, they have people from outside families, so we decided to use the name of their village, Huayin.” However, there will still be plenty of family involved: vocalist and leader Zhang Ximin will be joined by two brothers, as well as uncles and cousins.

Wu Man noted that this tour marks the first time in several decades that the pipa will be played alongside shadow puppets. “Around Ximin’s grandfather’s generation, they slowly switched from pipa to another plucking instrument, the round-bodied yueqin,” she said. “The pipa faded away because it’s a difficult, demanding instrument. So this is a rediscovery for me, but also going back to the original form. And it definitely makes sense musically — it adds a lot of color.”

Rediscovery and preservation of traditional music are deep passions of Wu Man’s. A graduate of the Central Conservatory of Music in Beijing, she said that going to a conservatory provided excellent training to become a virtuoso, but that it also isolated her from her country’s folk traditions.

“Everything comes from somewhere,” she said. “I wanted to remind myself of this tradition and its value. At the same time I want younger generations to understand it, to know such old traditions exist. And this tradition is fascinating — it’s cool. We cannot forget about it, we cannot just throw it away or let it die. But we can reinvent the form when we bring it to the modern stage, so that it’s still very much fresh. There are so many different cultures that have existed on this earth, and I want to share this one.”

Jackson began the program with a recitation of Langston Hughes’ poem “Helen Keller” — the first of five poems by Hughes that served as interludes between each piece on the first half. END_OF_DOCUMENT_TOKEN_TO_BE_REPLACED

Pianos with pins and tape on strings, a bass drum and tam tam, crotales, Almglocken, and vibes. Microphones were hooked up all around the instruments. The feed was sent to speakers around the room. Lighting designer Nicholas Houfek hung incandescent globes over the arrangement of instruments from thin black wires stretching across the beams. END_OF_DOCUMENT_TOKEN_TO_BE_REPLACED

From the podium, Elim Chan set an ambitious tone for the evening. The rising star conductor, here in her Cleveland Orchestra debut, has a commanding style, and every twist and turn in Saturday’s performance tracked closely with her baton. END_OF_DOCUMENT_TOKEN_TO_BE_REPLACED