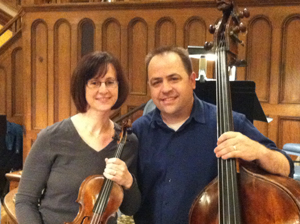 On Thursday, May 16 at 7:30 pm, Akron Baroque plays its final concert of the season at First Congregational Church, extending its reach into the classical area with works by Joseph and Michael Haydn and Johann Christian Bach, but honoring its Prime Directive with a concerto for violin and double bass by Antonio Vivaldi with Amber and Maximilian Dimoff as soloists. Amber is in her third year with Akron Baroque and plays regularly in the first violin section of the Akron Symphony as well as with Cleveland Pops and Cleveland Chamber Symphony. Max is principal bass with The Cleveland Orchestra, but has appeared more than once as an electric bassist in contemporary works with his orchestra colleagues.

The Dimoffs are a musical family. Their daughter, Isabel, plays cello in the Cleveland Orchestra Youth Orchestra and Contemporary Youth Orchestra and just won the senior division in the Cleveland Cello Society’s Scholarship Auditions. Their son, Xavier, plays saxophone in CYO and is studying jazz. Though father and daughter premiered a new concerto together with CYO earlier this season, Max and Amber haven’t often had the opportunity to perform together as a duo.

“We did play some Bach pieces last summer at a bass workshop in Seattle,” Amber told us in a conference call. “We thought we were being unique, but it was funny — there were several bass recitals with violin that week.” The invitation to play a concerto with Akron Baroque originally came to Amber from conductor Guy Victor Bordo and gave her an inspiration. “We had just played a violin and viola concerto with Cory and Ann Smith and I thought they looked so sweet up there together that I wanted Max to play with me.”

Because nobody seems to have written a concerto for violin and bass, the Dimoffs did the modern thing and launched a Google search for the more likely combination of violin and cello. “We found a ton of Vivaldi concertos for violin and cello, but they all started sounding alike,” Amber said. “So we asked Guy which one he liked and he said ‘this is the one we have the music for.’” Aside from that very practical consideration, the B-flat concerto has an attractive slow movement that Max calls “really sweet.”

Adapting a cello part for the double bass requires a few adjustments. Max says “I’m going to use the same high C tuning I used earlier this year for the concerto I played with the Contemporary Youth Orchestra. I rewrote the cello part and play it a fourth lower so it sounds at pitch.” “I don’t see how he does that!” says Amber, but Max has his own way of dealing with the disconnect between the notes and the sound: “I just shut down that part of my brain and don’t think about it, although sometimes when I’m practicing at home I miss the shift because I’m thinking about a different note.”

On the other hand, Amber has recently taken up the viola to play in a string quartet and to take a summer gig playing The Book of Mormon in Playhouse Square, a switch of instruments that usually means learning to play in a new clef. Amber, like Max, has a solution. “That’s not so hard; I just read the notes in C on a grand staff.” “I don’t know how she does that,” says Max.

Amber enjoys playing with Akron Baroque. “It’s really intense because there are only two rehearsals before every concert so you have to show up with every note under your fingers, but it’s also relaxed and the people are easy to be with and so supportive.”

Max has just finished playing two sets of Cleveland Orchestra concerts under early music specialist Ton Koopman, so the Akron Baroque concert fits right in. “It was an interesting run,” he says. “It was challenging to play in a different way that we haven’t been trained for. He wanted us to be almost improvisatory so we could react to him more. The parts weren’t marked very much so we had to be spontaneous, but the results were always good.”

Juggling four busy musicians’ schedules can be a complicated task but the Dimoffs have technology on their side. “Google Calendar is our friend,” Amber says. “Everything is color-coded,” Max adds. “We’re trying to get the kids to use it more,” Amber notes. “We all have iPhones and bought the ‘Find My Friends’ app so they can check in after school and see who’s closest to give them a ride home.”

Between Blossom, Cleveland Orchestra tours, Playhouse Square, summer musical camps, and college visits, summertime is almost equally busy for the Dimoffs. “Max is trying to get me to go to the bass convention,” Amber says. “Among other things, I’m scheduled to judge a solo competition”, Max adds. What do bassists converse about when they get together? “String setups, tunings…” Max begins. Amber sighs. “We’ll talk later.”

On Thursday, May 16 at 7:30 pm, Guy Victor Bordo conducts Akron Baroque with Amber Dimoff, violin & Maximilian Dimoff, bass, in Michael Haydn’s Symphony No. 25 (with introduction by Mozart), J.C. Bach’s Sinfonia in B-flat, op. 3, no. 4, Vivaldi’s Concerto in B-flat for Violin and Bass & Joseph Haydn’s Symphony No. 3 in G. The free concert is at First Congregational Church, 292 E. Market St., Akron. A Freewill Offering will be received.

Published on ClevelandClassical.com May 15, 2013

Northeast Ohio’s Les Délices has long been that rarest of beasts: a world-class organization so proud of its region (ours) and repertoire (distinct niches in pre-1800 music) that it never tries to be everything to everyone, paradoxically making a strong case for a broad, curious international following. In the December episode of its SalonEra series, the ensemble embraces its strengths and community to marvelous effect. END_OF_DOCUMENT_TOKEN_TO_BE_REPLACED

END_OF_DOCUMENT_TOKEN_TO_BE_REPLACED

Another I remember fondly is Gian Carlo Menotti’s Amahl and the Night Visitors.  Commissioned by NBC, the one act, made-for-television opera, premiered on December 24, 1951, at the network’s studios in New York’s Rockefeller Center. And now, through the wonders of technology, Cleveland Opera Theater has created a magical new production of the work which is available on demand through January 6, 2021 (Three Kings Day). END_OF_DOCUMENT_TOKEN_TO_BE_REPLACED

Jessen has now followed up with her second solo CD, Winter Chapel. Recorded on January 17, 2020 in Oberlin College’s Fairchild Chapel and available on Carrier Records, the album is a continuum in Jessen’s journey to push the musical boundaries of her instrument and herself as an improviser. END_OF_DOCUMENT_TOKEN_TO_BE_REPLACED