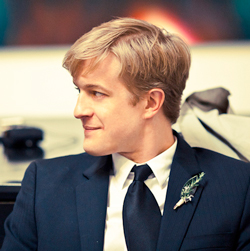 “I love this concerto,” Levi Hammer says of Mozart’s 25th piano concerto. “I never played it and have always wanted to. It has the most gorgeous woodwind writing, especially in the second movement, and to me, it is like playing chamber music.”

Levi Hammer, who is also the Akron Symphony’s assistant conductor as well as music director of the Akron Youth Symphony, says that he sees his career following the long tradition of conductors who have ascended to the orchestral podium through the piano. “You think about Karajan, Bernstein, Levine, Barenboim, Muti and Eschenbach and even Szell and Reiner: they were all fantastic pianists and they all continued to play even though they were essentially conductors. Nowadays we have the likes of Asher Fisch, Antonio Pappano and Robert Spano, who are all conductors but still remain very active as pianists. It is important to me that I follow this tradition and I am following it quite consciously.”

Hammer says the fact that this Mozart’s 25th concerto is very symphonic in nature is something that drew him to the work. “It’s a piece that is in line with my own sensibilities.” He quickly points out that while Mozart sounds simple, there is a lot of work that goes into making it sound effortless. He also believes the concerto paired with Brahms’s first symphony makes for a great program. “Both pieces are written in the key of C Major and the two composers are of the same musical sensibilities. And Brahms worshipped Mozart.”

For Sunday’s performance, Levi Hammer took on the challenge of writing his own cadenza for the first movement, “I thought about including some quotes from the Brahms symphony but I felt it might make people laugh. I have written cadenzas for some previous performances but how I approach it always depends on the occasion,” he said, adding that there are so many ways to approach the writing of a cadenza. “I’ve written something that I like and I think Mozart would like it too even though I’m a mere mortal and he was not.”

These days Levi Hammer spends the majority of his professional life as a conductor, although he does play the piano every day for one reason or another. “I don’t play these big pieces very often anymore because my professional focus has shifted to conducting — although I do play concertos a couple times a year, which I have had the chance to do in Akron. But, I do choose the concertos very carefully.”

He adds that there is a certain amount of pressure that comes with performing in front of the hometown audience. “I don’t bill myself as a pianist anymore so I do feel that it is a privilege to be able to perform with Christopher Wilkins and the Akron Symphony. I am always happy to be able to do this with Christopher. He is such a great conductor of Mozart. He allows the music to speak for itself but also steps in at the appropriate moment and energizes things. And, we are very good friends. It’s good for me to be around him because I sometimes have wilder tastes then he does and he reins me in and I appreciate that so much. He is a great mentor.”

END_OF_DOCUMENT_TOKEN_TO_BE_REPLACED

The strings-only work by Berg has made relatively frequent appearances on the Orchestra’s programs. In 2021, the musicians recorded it for the In Focus series, and it appeared again on last year’s European tour. Friday’s rendition maintained the group’s characteristic light and effortless playing, each section blending as much as possible to echo the work’s original form as a string quartet. At fifteen minutes total, the piece is quite short, but the dense encoded musical meanings require some extra-attentive listening. Splitting up the three movements ensured that each one could be appreciated on its own. END_OF_DOCUMENT_TOKEN_TO_BE_REPLACED