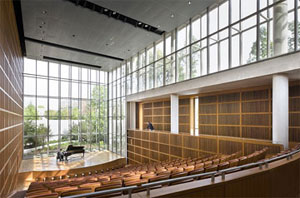 love doing recitals. I love the opportunity to share stories, and you really get to be a story teller when you do a recital,” American soprano Christine Brewer told us by telephone from Minneapolis, where she was performing the role of Sister Aloysius in the world premiere of Douglas Cuomo’s opera Doubt at the Minnesota Opera. “I do a lot of recitals and I’m always trying to find something that is interesting to me and I hope will be moving and thought-provoking for the audience as well.” On Thursday, March 7 at 8:00 pm in Mixon Hall at the Cleveland Institute of Music, Christine Brewer and pianist Craig Terry will perform songs based on the theme of being away from home.

“We’re really excited about doing this program. I know Craig from Lyric Opera of Chicago. We’ve done several recitals together and about a year ago he suggested the idea. The recital begins with Barber’s Knoxville Summer of 1915, to set the tone about the comfort one gets from being at home and being surrounded by people who are loving and protective. Brewer, who hails from Grand Tower, Illinois, a Mississippi River town, says “I grew up in a setting kind of like that. We really did gather at my grandparents’ house and lay on quilts in the yard and heard our parents chatting on the porch. You never really knew what they were talking about, but there was a comfort about the whole setting.”

Alan L. Smith’s 2002 song cycle, Vignettes: Letters from George to Evelyn, from the Private Papers of a World War II Bride, a setting of letters from a G.I. killed in Germany just weeks before V-E Day, rounds out the first half. “The letters are love letters but there are a couple about his fears of being in charge of the soldiers and having to put on a fake bravado and that he is nervous about what’s going to happen. He does get killed and one of the songs is the telegram that his wife receives telling her of his death. The last song is a letter from him that she received after the telegram.” Brewer says the piece has a special meaning to her: “I remember when I was a kid we had a young man in our church who was a medic in Vietnam and his letters were read in church every couple of weeks. He was also killed and I do remember how sad it was when a couple of weeks later the minister read another letter from him that had just arrived. That’s what I think makes Alan’s piece so poignant — because you hear the telegram and then you hear one last letter. It’s not a maudlin piece, it’s loving and lovely.”

The program also includes many familiar songs like Sentimental Journey, I’ll be home for Christmas and Blue Skies. Craig Terry also suggested they include a couple of songs made famous by Doris Day, including The Last Mile Home. “That one just breaks my heart,” Brewer says, and asks if I she can read some of the lyrics.

You can travel around the globe,

you can see a lot of things

from Mandalay to old Pompeii

to Paris in the spring.

But you’ll learn one thing,

You travel far over land and sea

The one day it’s clear as can be,

The sweetest mile you’ll ever roam

is the last mile home.

The program also includes many funny songs, and one that Brewer says really cracks her up is Sammy Chan’s I’m Still Sitting Under the Apple Tree, which was also a hit by Doris Day. There will also be a few jazz standards such as Fats Waller’s 1929 classic Ain’t misbehavin.

Brewer says that although most of the music is before her era, she grew up with it because her mother sang in a gospel jazz trio. “I don’t really know what they were, but they started singing together when they were in high school. When I was a kid I would sit in on the rehearsals and I’d hear them singing Sentimental Journey and a lot of the McGuire sisters’ stuff. So when Craig and I started pulling together some ideas it was hard to narrow it down to ten to twelve songs for the second half.”

Christine Brewer attended McKendree University where she studied music education. She also worked as a music teacher for several years before deciding to pursue a performing career, and education thorough music is something that is an important part of her life as well as her husband’s. “He used to teach history and he taught it through music, art and literature. He would take music from [whatever era] he was teaching and play it for the kids, and read books that were written during the era just to give them a sense of what the country was going through.” And she continues to work with young students in the sixth grade classroom where she had formerly taught music. “Many of the students have brothers and sisters in Afghanistan and they can write e-mails to them. But during WW II, letters were written and it would take weeks to get the letters.”

Being at home and staying connected to friends and family is something that is clearly important to Brewer, and after reading about her annual hootenanny, I tell her that she could start charging people to attend. “You know,” she says laughing, “it keeps growing. I mention it to people and they want to come. We have people show up from all over the country. They bring an instrument and play and we just have a wonderful time. Even my daughter, who is a nurse, called to ask when it is so she could schedule her vacation around it.” Brewer tells me that her manger has even put it on the schedule. “It’s so nice to just sit and make music with people.” She says that she always tells young singers that good music is good music. “I always think, don’t sell yourself short and say, oh, I only sing opera or classical music. I mean when good music is sung well it’s good music. I also say that I’ll stop doing this when the joy is gone, and so far the joy has doubled. It’s just been a fabulous ride.”

Jackson began the program with a recitation of Langston Hughes’ poem “Helen Keller” — the first of five poems by Hughes that served as interludes between each piece on the first half. END_OF_DOCUMENT_TOKEN_TO_BE_REPLACED

Pianos with pins and tape on strings, a bass drum and tam tam, crotales, Almglocken, and vibes. Microphones were hooked up all around the instruments. The feed was sent to speakers around the room. Lighting designer Nicholas Houfek hung incandescent globes over the arrangement of instruments from thin black wires stretching across the beams. END_OF_DOCUMENT_TOKEN_TO_BE_REPLACED

From the podium, Elim Chan set an ambitious tone for the evening. The rising star conductor, here in her Cleveland Orchestra debut, has a commanding style, and every twist and turn in Saturday’s performance tracked closely with her baton. END_OF_DOCUMENT_TOKEN_TO_BE_REPLACED