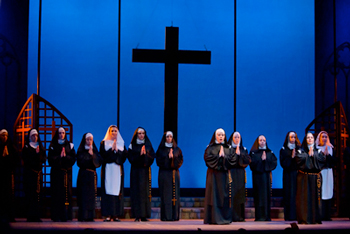 Poulenc’s 1956 Dialogues of the Carmelites will be the next production of the Cleveland Institute of Music’s Opera Theater, opening on Wednesday, February 27 and running through Saturday, March 2, with stage direction by David Bamberger. Harry Davidson conducts the CIM orchestra. Following Poulenc’s wishes, the libretto will be sung in the language the audience understands, but with English supertitles added. The opera is double-cast for Wednesday-Friday and Thursday-Saturday performances.

Dialogues of the Carmelites tells the true story of an order of Carmelite nuns during the French Revolution whose monastery is seized and its members executed. The plot centers around the spiritual journey of Blanche de la Force, the daughter of a wealthy nobleman. “What I think is particularly interesting is that the events are completely historical,” says CIM Opera Theater director David Bamberger. “The famous last scene where the nuns are guillotined and their voices drop out one at a time is exactly what happened.” He adds that while the character of Blanche de la Force and her family are invented, with a quick Google search you can read the story of the Carmelites and the Reign of Terror.

Although the opera takes place during a dark period in 18th century French history, Bamberger points out that it raises questions that are relevant in today’s world. “I think that one of the very important things about it is that, conventionally, we now identify terrorism with religion. Particularly since 9/11 the phrase “Islamic terrorism” automatically comes to the mouth. But this story is kind of a corrective to that to the extent that it reminds us that the Reign of Terror was actually anti-religious. Robespierre and his colleagues wanted to get rid of religion entirely and replace it with the new Cult of Reason. Here the religious people are committed, but they aren’t committed to forcing anybody else to do what they don’t want to do.”

Bamberger thinks the character of Blanche is the personification of all of these issues, “On one hand she is afraid of the world, and in her mind, going into the convent is a way of escaping all of that. But the people in the convent tell her no, this is not the place to escape this, it is a place of a different kind of challenge. She is struggling with who she is, what life is, the meaning of death, when do we sacrifice ourselves and for what? All the questions that any thinking person at some point in his or her life faces.”

We spoke with two cast members last week by telephone and got their insights into the opera and their characters.

Mike Telin: You’re performing the role of Blanche de la Force /Sister Blanche of the Agony of Christ. Did you find it easy or somewhat difficult to relate to the character?

Allyson Dezii: Blanche was a difficult character to relate to at first because she tries so hard to suppress her fears and struggles. I’m a very open person and I’m always telling people how I feel. So yes, it was kind of difficult. Blanche experiences so much personal growth from the beginning to the end of the opera, so yes, it’s a challenge but I feel like I have gotten the grasp of it and I love playing her.

AD: She is so consumed by her fear [of death] that she feels the need to escape to the convent. But, when she gets there, everything she is afraid of is also inside the convent walls. Blanche witnesses the death of the Prioress who brought her into the convent. Then you have the Reign of Terror, and again she is so consumed by her fear that she runs away from the convent. She does overcome her fears and in the end she decides to return and meet her sisters and ultimately her death. It’s a beautiful story.

MT: What do you think is the cause of her fears?

AD: I think Blanche’s problems stem from the fact that her mother died in childbirth — she survived but her mother passed away. And this obviously created a struggle for her father and for her older brother. I think that all of her life, death was something that was always with her. The entire opera is about Blanche’s journey of overcoming her struggles. What’s interesting to me is that her struggles are exemplified by the name she took when she entered the convent, Agon, The Agony of Christ. But agony does not refer to the physical or emotional pain that Christ suffered but rather the overall agon or the struggle of Christ’s journey.

Mike Telin: You’re performing the role of the New Prioress, Madame Lidoine/Mother Marie of St. Augustine; did you find it easy or somewhat difficult to relate to the character?

Jilda Farias: This role is a stretch for me because she is an older character and an authoritative figure. She is in charge of all of these nuns’ lives. She does feel responsible and has a sense of duty. I did a lot of reading about how the Carmelites view authoritative figures and about the relationships between the sisters.

MT: I understand that a member of the Carmelite monastery came to talk to the cast?

JF: When Sister Barbara came to talk, that was so helpful. It was good to hear their history and how things are in the present; how they exist in today’s society.

When my character comes to the convent it’s not that she isn’t welcomed, but there is some confrontation or different ideas that are going around. Because she was against seeking martyrdom she lectures the nuns, telling them that prayer is a duty that is given to them by God but martyrdom is a reward that is not to be sought. Tensions do rise but she deals with them the best that she can. [laughing] There is conflict within the nunnery, and Sister Barbara helped us to understand that nuns are human and they do have conflict that they resolve within themselves.

MT: We don’t know a lot about your character prior to her arrival at the convent; were you given or did you create a back story?

JF: I was not given a specific back story but do think of her as being a specific age. I think she is from a different part of France, and traveled far in order to be at the convent. I think she feels that she was thrown into the situation and has to deal with it the best way that she can by guiding these women through prayer.

MT: Do you think she sometimes asks herself, what are these women thinking?

JF: Absolutely! She does have her moments of wondering why are they doing this. But what gets me most about the story is that these are not fictional characters except for Blanche. My character actually was beheaded. So in my mind I am trying to give a remembrance to them and their horrific story.

Photos of the Wednesday-Friday cast by Leigh-Anne Dennison courtesy of CIM.

Jackson began the program with a recitation of Langston Hughes’ poem “Helen Keller” — the first of five poems by Hughes that served as interludes between each piece on the first half. END_OF_DOCUMENT_TOKEN_TO_BE_REPLACED

Pianos with pins and tape on strings, a bass drum and tam tam, crotales, Almglocken, and vibes. Microphones were hooked up all around the instruments. The feed was sent to speakers around the room. Lighting designer Nicholas Houfek hung incandescent globes over the arrangement of instruments from thin black wires stretching across the beams. END_OF_DOCUMENT_TOKEN_TO_BE_REPLACED

From the podium, Elim Chan set an ambitious tone for the evening. The rising star conductor, here in her Cleveland Orchestra debut, has a commanding style, and every twist and turn in Saturday’s performance tracked closely with her baton. END_OF_DOCUMENT_TOKEN_TO_BE_REPLACED