Nearly a quarter-century ago, composer-conductor Edwin London founded the Cleveland Chamber Symphony at Cleveland State University. With the directive of performing “music of our time that dares to explore”, CCS developed a reputation and a dedicated following for offering professional performances and recordings of new works, and, along the way, copped an impressive list of awards including a Grammy.

After London retired, a series of hosting, leadership and funding vicissitudes left the organization essentially homeless but doggedly determined to keep itself alive through new relationships with the Cleveland Music School Settlement and Baldwin Wallace University. Its “Meet the Composers” and “New and Emerging Composers” series have continued on an annual basis, and last season CCS teamed with Verb Ballets for performances at Cleveland Public Theater.

The Verb Ballets relationship will be renewed on Thursday, June 13 at 7:30 pm in Gamble Auditorium at Baldwin Wallace, when music director Steven Smith will conduct the premiere of James A. Hirt’s Chromatophores, Clint Needham’s Urban Sprawl, and Michael Leese’s Harp, Percussion and Strings. Also on the program is Smith’s own String Quartet. Smith talked about some of the repertory by phone from his home in Richmond, VA, where he serves as music director of the Richmond Symphony.

“It’s a mixed program, very much Cleveland-based,” Smith said. “We’re celebrating Michael Leese’s memory with a piece he wrote for Jocelyn Chang, which in a way pays tribute to both of them, who were key members of the CCS family since the very beginning. It was tragic to have lost both of them in quick succession.”

Then comes a more light-hearted element: Baldwin Wallace faculty composer Clint Needham’s Urban Sprawl. “That’s one of our partnerships with Verb,” Smith notes. “When I first heard it, I thought it was the perfect dance piece, full of energetic, buoyant rhythms.” 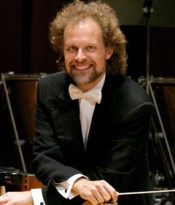 Smith’s own String Quartet, originally commissioned in connection with his having won the Ohio Composer of the Year award from the state chapter of the Music Teachers National Association, was played in its entirety on an earlier CCS performance at the Settlement, “then Verb danced the third movement at Cleveland Public Theater, so we’re expanding on the idea. They may not be doing all the movements, but they’re adding at least one more. I wasn’t able to see the CPT performance, so I’m excited to see what they’ll be doing with it. It’s interesting for me as a composer to see how people react to a piece that I’ve written and I’m doubly curious to see how a choreographer reacts and brings the music to life through dance.”

The Verb Ballets collaboration is likely to continue in the future. “We operate in the same area of our respective disciplines — pushing the edges of tradition with modern components — so it’s a logical match and helps us bring our audiences together.”

Smith’s broader view of the orchestra’s future includes an annual new music festival so early in the planning and funding stages that only the outlines are clear. “We want to condense our activities into a smaller period of time and further our connections with Baldwin Wallace and the Cleveland Music School Settlement, make new connections with other organizations and showcase the remarkable amount of new music activity in the area.”

A lot has changed in the new music world since CCS was founded. Smith thinks the orchestra’s continuing mission still includes services to young and emerging composers, including professional recordings of their works, just as Edwin London originally had in mind. Smith describes his own continuing involvement as “a labor of love. It’s an opportunity to continue working with musicians I respect, whose technical expertise is unsurpassed. Besides that, I have great friendships here and a long history with Cleveland.”

Published on ClevelandClassical.com June 11, 2013
Click here for a printable version of this article.
Return to the website.