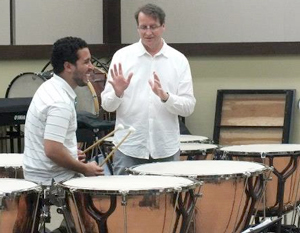 Musically speaking, this is a diverse week for The Cleveland Orchestra. Lovers of contemporary music can hear half of the orchestra’s players performing two concerts as part of the California Masterworks series at the Cleveland Museum of Art, but lovers of music from the baroque and classical periods can also have their listening appetites fulfilled.

On Friday, May 3 at 11:00 am, Saturday May 4 at 8:00 pm and Sunday, May 5 at 3:00 pm in Severance Hall, Ton Koopman will lead concerts featuring Mozart’s Symphonies No. 1 and 17, Haydn’s Symphony No. 45 (Farewell) and Rebel’s Overture to The Elements. (Mozart’s Symphony 17 and the Rebel Overture are on Saturday’s and Sunday’s programs only) All three concerts feature German composer Johann Carl Christian Fischer’s unique Symphony with Eight Obbligato Timpani.

We spoke to Cleveland Orchestra principal timpanist Paul Yancich (above, coaching Pedro Fernandez at the University of Miami) about that fascinating and challenging work, but began by asking him why he wanted to perform the piece.

Paul Yancich: The nice thing about the Fischer is that it is the first known timpani concerto ever, and that is why I wanted to play it. It’s a very interesting piece and I think the audience is going to be intrigued to see and hear the whole thing. It’s not too long but very challenging — moreso than I first thought when I looked at the music.

Mike Telin: Why is that?

PY: Because of the set-up that is required. Normally I use only four timpani, which utilize pedals to make the note changes. Technically it has been more challenging because when you have eight timpani in front of you, the span of the set-up is almost twice as large as what I would normally use.

MT: And this was written before the invention of the pedal timpani. 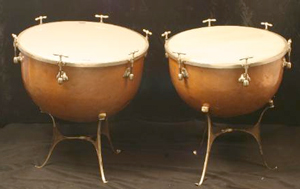 PY: Yes, the pedal timpani were invented in the late 1800’s. Before that, each drum typically had six hand screws on top and the player would have to turn each one a little bit at a time in order to raise or lower the pitch (see photo). Also, you have to strike the drum in a certain spot, and it has to be a certain distance away from the rim, and when you move from one instrument to the other you have to maintain those relationships. So I had to learn how to [physically] get to the other instruments while maintaining the same playing spot. If you strike the drum in the wrong spot it will not sound the same as the drum next to it and that would break the musical line.

MT: Can you say a little bit about the piece?

PY: The part is written in the bass clef as a C major scale but written from G to G. The drums are tuned this way because if you started at C — the second space in the bass clef — you’d have to have tiny little drums to get to the top note, which would not have been available during that time. If you started on the low C you’d have the same problem in that you would need gigantic drums to make it work. Musically it has been very enjoyable to work on because it utilizes both melody and harmony and uses a lot of the “Alberti” bass.

MT: I was not able to find a lot of information about Fischer.

PY: There is not a tremendous amount of information known about him. Scholars do know that he was a musician, director, publisher and copyist. They think this piece was most likely written for a royal court or celebration and was most likely performed along with many other pieces. They also think that perhaps a member of the court had a favorite timpanist. But what is interesting is that this piece started a little run on the composing of timpani concertos, but then they lost favor and nothing was composed until the mid 1900’s.

An interesting tie is that the person who edited this concerto and basically brought these timpani concertos back to life is Harrison Powley, my first timpani teacher. He was a longtime faculty member at Brigham Young University and so I have talked to him about the concerto.

MT: This is the second concerto you have performed in the past couple of years.

PY: Yes, but this is a very different piece from the one that I did at Blossom.

It’s interesting because in the past — and I stress The Past — any member of the percussion section performing a solo was considered a novelty. But during the past thirty or forty years, percussion instruments and percussion music have really come to the forefront, especially in the concerto format. But this piece is a nice slice of life from the late 1700’s that I’m sure the audience will find interesting and enjoy listening to.”

Franz Schmidt’s Symphony No. 4 showcased the ensemble, under guest conductor Jonathan Berman, in the standard conventions of a not-so-standard piece. But at the start of the program, the musicians were equal partners to pianist Cédric Tiberghien, whose playing could be as bold as the full orchestra or as intimate as any instrumental solo. END_OF_DOCUMENT_TOKEN_TO_BE_REPLACED

END_OF_DOCUMENT_TOKEN_TO_BE_REPLACED

Jackson began the program with a recitation of Langston Hughes’ poem “Helen Keller” — the first of five poems by Hughes that served as interludes between each piece on the first half. END_OF_DOCUMENT_TOKEN_TO_BE_REPLACED

Pianos with pins and tape on strings, a bass drum and tam tam, crotales, Almglocken, and vibes. Microphones were hooked up all around the instruments. The feed was sent to speakers around the room. Lighting designer Nicholas Houfek hung incandescent globes over the arrangement of instruments from thin black wires stretching across the beams. END_OF_DOCUMENT_TOKEN_TO_BE_REPLACED

From the podium, Elim Chan set an ambitious tone for the evening. The rising star conductor, here in her Cleveland Orchestra debut, has a commanding style, and every twist and turn in Saturday’s performance tracked closely with her baton. END_OF_DOCUMENT_TOKEN_TO_BE_REPLACED