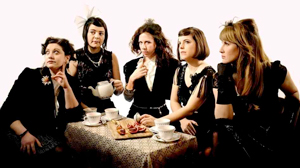 “It was my attempt to take control over where, when and how my music was performed. As a classical composer you’re usually at the whim of other performers and presenters. My goal was to take the best aspects of having a band, and the best aspects of being a composer and combine them, which is what I have done with the group,” Mazzoli told us by telephone. On Friday, February 22 beginning at 7:30pm in Gartner Auditorium at the Cleveland Museum of Art, VIVA! & Gala performing arts series presents Victoire in concert.

Mazzoli’s music has been described as a combination of dreamy post-rock, quirky minimalism, and rich romanticism, although in conversation she says that her compositions are simply a representation of who she is. “As someone who grew up listening to the radio, I don’t make much of a distinction between acoustic instruments and synthesizers,” adding, “it’s all just part of the sound pallet that is available to me.”

In addition to Mazzoli, Victoire features violinist Olivia De Prato, clarinetist Eileen Mack, keyboardist Lorna Krier and double bassist Eleonore Oppenheim. While Mazzoli agrees that Victoire is probably one of only a few chamber music ensembles that regularly uses both acoustic and electronic instruments, she doesn’t feel the combination is revolutionary, “I just had that sound in my head and that was the sound I wanted to create. It is all part of who I am as a composer.”

She points out that it is 2013 and paying attention to what has been happening in the music world during the last five to ten years has been inspiring. “It’s no longer unusual for a band to have a violin or a classical ensemble to use electronics, so I do feel very liberated in that sense. I feel like I can do whatever I want and not worry about stylistic boundaries. It’s just the sounds that I fall in love with.” Mazzoli says the band is “flexible” and has played in venues ranging from small from art galleries to topnotch concert halls. “I chose the instruments and the players knowing that I wanted that flexibility.”

Mazzoli has had her music performed by many ensembles of note including the Kronos Quartet, eighth blackbird, the American Composers Orchestra, New York City Opera, the Minnesota Orchestra, the South Carolina Philharmonic, NOW Ensemble and many others. In 2012 she premiered her first multimedia chamber opera, Song from the Uproar.

Mazzoli is also the recipient of four ASCAP Young Composer Awards, a Fulbright Grant to the Netherlands, and grants from the Jerome Foundation, American Music Center, and the Barlow Endowment. She has taught composition at Yale University, and from 2007-2010 was Executive Director of the MATA Festival in New York City. Not bad for someone who is still in her early thirties!

Mazzoli grew up playing piano but did not come from a particularly musical household. “Any classical music that I encountered felt like an amazing discovery.” She says that although her parents were not musicians, they were very supportive. “I feel like this is all a blessing because I was able to discover my own path.” Although her first love was classical music, like most teenagers she grew up listening to whatever was on the radio. “I really immersed myself in pop music, but music had this incredible power over me so I grew up trying to absorb everything.”

As far as forming Victoire, being in a band is also part of who she is. “I played in bands since I was fifteen so performing my own music is something that has always been an essential part of composing. If I were not doing both I don’t think I would feel happy as a musician.”

Mazzoli did her undergraduate studies at Boston University, and then moved to Amsterdam for two years to study with Louis Andriessen. “[Going to Amsterdam] was a life-changing experience. Leaving the States for a little while gave me a more balanced perspective about what was going on in the world.” Mazzoli returned to the U.S. to do graduate work at Yale.

Education is something that Mazzoli feels is very important. She has presented residencies at universities and with orchestras, and she sees that people are now more open to different musical styles then they once were. The success of Victoire is proof. “I feel very accepted by the traditional classical world as well as the Indie-rock and pop world.”

The music of Bach is an obsession of Mazzoli’s and she says that she continually rediscovers his music. “There is an infinite depth [in his music] and it is something I didn’t really appreciate as a younger composer. Part of it is just getting older and have more of an attention span.” She has recently composed a work that is a response to Bach’s Chaconne for Jennifer Koh’s Bach and Beyond project, “This was a very tall order for my first solo violin piece. I was looking at his music a lot during that time and I was struck by how he was able to create such a rich harmonic piece for a single instrument. So it’s like everyday I am discovering something new and inspiring about Bach.”

Is it true that she started composing for toy accordion because she bought one in Mexico? “I was at a flea market where you could get anything you wanted with Frida Kahlo’s face on it and there was this five dollar toy accordion. It was really just a complete whim. But I brought it home and began to mess around with it and thought that I really needed to make a piece with it because it has such an amazing sound.”

Jackson began the program with a recitation of Langston Hughes’ poem “Helen Keller” — the first of five poems by Hughes that served as interludes between each piece on the first half. END_OF_DOCUMENT_TOKEN_TO_BE_REPLACED

Pianos with pins and tape on strings, a bass drum and tam tam, crotales, Almglocken, and vibes. Microphones were hooked up all around the instruments. The feed was sent to speakers around the room. Lighting designer Nicholas Houfek hung incandescent globes over the arrangement of instruments from thin black wires stretching across the beams. END_OF_DOCUMENT_TOKEN_TO_BE_REPLACED

From the podium, Elim Chan set an ambitious tone for the evening. The rising star conductor, here in her Cleveland Orchestra debut, has a commanding style, and every twist and turn in Saturday’s performance tracked closely with her baton. END_OF_DOCUMENT_TOKEN_TO_BE_REPLACED