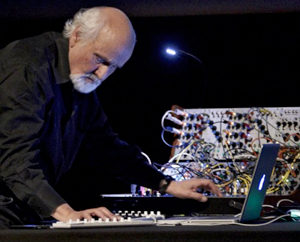 When one thinks of trailblazers in electronic music, the name Morton Subotnick will be near, if not at the top of most people’s lists. On Thursday, November 14 beginning at 8:00 pm, MOCA presents Morton Subotnick in a concert titled From Silver Apples of the Moon to A Sky of Cloudless Sulphur IV: LUCY.

The concert is Subotnick’s only performance in the region and is presented in collaboration with the department of Technology in Music and Related Arts (TIMARA) of the Oberlin Conservatory of Music.

Using synthesizers designed by Don Buchla, the music for this concert is both retrospective and forward-looking. “It’s a piece that looks back on two of his previous works which are quoted in the title,” says Chris Auerbach-Brown, Media Program Manager at MOCA. “It’s almost like a remix where he takes sounds from those pieces and rehashes them and comes up with something new.” Subotnick will use a new hybrid digital-Buchla “instrument” loaded with prepared samples from all previous works and new patches specifically created for the current season of performances.

With such an extensive list of accomplishments in so many areas of electronic music, what will he most be remembered for? “That’s a good question,” says Tom Lopez, Associate Professor of Computer Music and Digital Arts at Oberlin. “But I think it is going to be his music, because that is what captured everyone’s imagination from the very beginning.”

Lopez, who remembers first hearing Subotnick’s music when he was 8 years old, believes it is his true originality and forward thinking approach to music that will stand the test of time. “He really is an experimenter and innovator in the truest sense.” Lopez, who would later go on to study with Subotnick as a grad student, also says, “I think there are aspects of his personality and his working process in addition to his thinking about music that are truly fascinating. But of course that doesn’t reach as many people as directly as his music, which staked out new territory that is still in everybody’s consciousness today. He’s one of the few pioneers of electronic music that all my students have heard of. There are many others who are historically important — and I can educate them about them — but they’ve all heard of Subotnick.”

In addition to composing, Morton Subotick has had a lifelong interest in using new technologies in music education, “As long as I’ve known him he has been trying to, and I do use the word liberate, children and young musicians from restrained, pre-conceived notions about what it is to play music and to interact with the musical process,” recalls Lopez. “He was always trying to find ways through technology — hardware and software — to shown them that there are wonderful musical things that you can do with a computer or a mouse or motion tracking if you have a camera. And to show that there are more ways of studying music then playing scales on the piano.”

END_OF_DOCUMENT_TOKEN_TO_BE_REPLACED

The strings-only work by Berg has made relatively frequent appearances on the Orchestra’s programs. In 2021, the musicians recorded it for the In Focus series, and it appeared again on last year’s European tour. Friday’s rendition maintained the group’s characteristic light and effortless playing, each section blending as much as possible to echo the work’s original form as a string quartet. At fifteen minutes total, the piece is quite short, but the dense encoded musical meanings require some extra-attentive listening. Splitting up the three movements ensured that each one could be appreciated on its own. END_OF_DOCUMENT_TOKEN_TO_BE_REPLACED