Geoffrey Peterson’s concerto chronicles the tragic shipwreck of The Edmund Fitzgerald in Lake Superior in November, 1975. Its four movements are entitled “Embarkment,” “The Gales,” “Six-Fathom Shoal” (“We’re holding our own”) and “Entombment-Dirge”. The concerto makes use of several musical quotes. The first is Spanish Ladies, an English sea chantey, which appears in both the first and third movements. The second is the funeral march theme from the second movement of Beethoven’s Third Symphony, which is heard in the fourth movement of the concerto. In addition, a chime is rung 29 times during the final bars of the piece to memorialize the men who lost their lives.

Richard Dickinson, who also serves as Verb Ballets Associate Director, said in a recent telephone conversation that being from California, he was not aware of the folklore the story has locally. “Everyone I’ve talked to who’s from the area seems to have a fascination with the story.” He also thinks it’s a tale that mirrors the great classical ballets.

“Being a dancer and having danced ballets like Swan Lake and Giselle, there’s always a tragedy and a transformation and I did feel this story has that. We all understand the tragedy but I see the transformation during the final scene when a townsperson stands up and looks toward the future as if to say this isn’t the end, this is just part of our lives. Sometimes these things happen and we move forward. So in the end, I approached the choreography as if it were a two-hour ballet even though it’s only fourteen minutes.”

As a choreographer, Dickinson says that he tries to get inside the head of composers in order to better understand the meaning of the music. “I’ll listen to pieces over and over again to try to figure it out. Geoffrey was also helpful: when he found out I was going to choreograph the concerto he sent me all of his research.”

Composer Geoffrey Peterson, who grew up in the Cleveland area and studied both at the Oberlin Conservatory and the Cleveland Institute of Music, said during a telephone conversation that writing a piece commemorating the wreck of The Edmund Fitzgerald was something he felt compelled to do. “I couldn’t get the idea out of my head.” 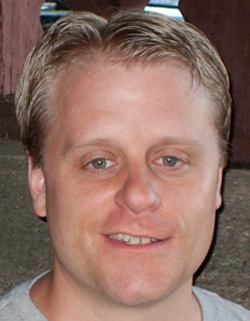 Peterson, who was living in Philadelphia at the time, admits it was after seeing the movie Titanic that the inspiration for his concerto for piano and strings came to him. “As an artist, sometimes you get an idea in your head and you simply can’t get rid of it. You either try to ignore it, which is very hard to do, or if it’s something you really should do it’s going to be like the proverbial monkey on your back. That’s what this piece was to me. I felt compelled to do it.”

Peterson also felt it would be interesting to write a classical companion piece to Gordon Lightfoot’s famous 1976 ballad. “If you’re not from the Great Lakes, it’s because of that song that you know about the wreck. He immortalized it. I love the song, it’s very haunting, but I wanted to do something for the concert hall.”

The concerto was completed in 2002 and afterwards Peterson connected with the head of development at the Great Lakes Shipwreck Museum in the Upper Peninsula of Michigan. “I told him about the piece and said that I’d love to get a premiere as close as possible to where the ship went down.” After corresponding for several years, the concerto was premiered in 2005 by the Sault Symphony Orchestra in Sault Ste. Marie, Ontario in commemoration of the 30th anniversary of the shipwreck. “It was really great because the concert took place only about 50 miles northwest of the actual shipwreck site.”

Writing the concerto also provided Peterson the opportunity to pursue his passion for research, citting the many Ohio connections to the ship. “One of the things I love about being a composer is that you get the privilege of being able to learn about all kinds of new things,” Peterson said, adding that he does delve into reading as much about a subject as possible.

“Of the 29 men who died, 14 were from Ohio, including four from the Cleveland suburbs of North Olmsted, Lakewood, Richmond Heights and Bay Village. The rest were mostly from the Toledo area as well as a few small towns. And the Captain, Ernest McSorley, was going to be retiring at the end of the year. So yes, for many people in Cleveland and around the Great Lakes this is not only a regional but also personal story.” The Edmund Fitzgerald was operated by the Ogleby Norton Company of Cleveland.

Peterson describes the concerto as a memorial to the men who lost their lives. “In the most simple terms, that’s what it is. The third movement, “Six-Fathom Shoal” (“We’re holding our own.”) was that last communication between the Edmund Fitzgerald and another ship in the area, the Arthur M. Anderson. The last radio transmission between Captain McSorley and the Capitan of the Anderson was “We’re holding our own,” then they vanished from radar.”

How does Peterson feel about having the concerto choreographed? “I went to a rehearsal and I think what Richard Dickinson has done is extraordinary. I never in a million years thought this piece would be choreographed but what Richard and the dancers have done is phenomenal.”

Click here– for a printable version of this article.

END_OF_DOCUMENT_TOKEN_TO_BE_REPLACED

Supported by engagingly, yet simple staging by Cara Consilvio, a well-prepared cast of singers told the archetypal story of Cinderella with charm and flair. Framing the production was  a sparse but colorful set and wonderful lighting by Dave Brooks. END_OF_DOCUMENT_TOKEN_TO_BE_REPLACED