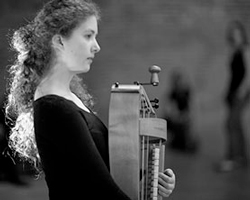 If you have been thinking that you wish you could find a concert featuring the hurdy-gurdy, this is your lucky weekend. And leave it to the always creative Les Délices to provide you with that weekend. On Saturday, April 20, beginning at 8 pm in William Busta Gallery and Sunday, April 21, beginning at 4 pm in Herr Chapel at Plymouth Church, Les Délices presents Four Seasons. The concerts feature master hurdy-gurdy player Tobie Miller in performances of Vivaldi’s famous violin concertos Printemps/Spring and l’Automne/Fall in eighteenth century arrangements for hurdy-gurdy and chamber ensemble by Nicholas Chedeville. The concerts also include music of Charles Buterne and Joseph Bodin de Boismortier.

Tobie Miller grew up in a family of classical musicians. After studies in Early Music Performance at McGill University, she moved to Basel to pursue postgraduate studies at the prestigious Schola Cantorum Basiliensis. Miller was the recipient of a further grant from the Canada Council in 2011-2012 for her work on the baroque hurdy-gurdy and transcriptions of J.S. Bach’s solo cello and violin repertoire for that instrument. Currently dividing her time between Basel and Montreal, Miller continues to perform and record with many ensembles on both continents. We reached Tobie Miller by telephone and began by asking her how she first came to the hurdy-gurdy.

Tobie Miller: It was love at first sight — or sound, whatever you want to call it. I was studying early music in Montreal as a recorder player and I heard it in a concert. I was just smitten and I didn’t stop until I found an instrument to play. I played violin as a child and it was the same reaction to the sounds that I had to the violin as a three year old.

Mike Telin: How many hurdy-gurdies do you own?

TM: I have three main instruments as well as a small Romanesque sinfonia. That is sort of a box-shaped instrument for accompaniment. I have a later medieval instrument and a renaissance instrument with a lot of modern modifications that allows me to play in different keys. Then the eighteenth century copy which is what I’ll be playing this weekend.

MT: Who made that instrument?

TM: All three were made by the same builder, an Austrian named Wolfgang Weichselbaumer. He is the leading hurdy-gurdy maker of his generation, specializing in a combination of modern instruments and new innovations for the instrument. He also goes into the realm of electro-acoustic instruments, which is quite popular. But just from the most basic point of view it’s a really difficult instrument to amplify. But there is a lot happening in the fields of new and world and traditional music. So he sort of branches out in those areas as well as in the areas of historical instruments. The instrument that I am playing is a copy of an instrument made in 1763 by Jean Louvet.

MT: I was fascinated when I read the program notes that Debra Nagy had sent, because of course I know the instrument, but I had no idea that the instrument has such a rich history, specifically in France.

TM: Yes, I think the instrument has a fascinating and varied background. It’s found in every place from the church to the beggars playing in the street, and in the country until it was revived by the nobility in the 18th century who were looking for this idealized view of the simple life. So that goes hand in hand with dressing up in peasant costumes and playing the village life. It was especially popularized because the queen of Louis XV, Marie Leszczyńska, decided to play the hurdy-gurdy. And whatever the queen does everybody follows. But she seems that have played quite badly. There are a lot of reports of people saying, oh dear, we had to listen to the queen again.

But out of that sprang lots of amateur players so there is a huge amount of repertoire that was published for the amateur market who had money. Especially noble ladies. It seem to have been an instrument that ladies liked to play. At the same time there were a whole bunch of virtuosi who appeared mainly in Paris around Versailles who were mostly men by contrast. This is why you have this virtuoso repertoire that is really specific for the instrument. Something to keep in mind is that the development of the hurdy-gurdy in France in the 18th century parallels the development of the musette, which is the French baroque bagpipe.

There is a lot of music written for these drone instruments, the hurdy-gurdy, musette or anything else you want to play it on. Which includes the music for the amateur market. But then there is the whole repertoire that is devoted just to the hurdy-gurdy.

MT: You mentioned the drone, and that was the first thing that came into my mind when thinking about the Four Seasons transcription. What is this going to sound like with a drone?

The second thing to remember is that Mr. Chedeville was quite obsessed with Vivaldi, or at least with using his name to make some money. [laughing] He didn’t transcribe everything exactly as Vivaldi wrote it. So out of all the concertos two are more closely based on Vivaldi’s original concertos. Those are the two that we will be playing, Spring and Autumn.

He begins with Vivaldi’s material then reworks it so it doesn’t stray into keys that are too far away from the tonic. In Autumn the outer movements are how Vivaldi wrote them but the middle has actually been stolen from Winter. The other concertos are things that he took from Vivaldi and things that he wrote himself. So they are not direct transcriptions from Vivaldi’s Four Seasons.

MT: What are the difficulties or challenges of playing the instrument?

TM: It is an instrument that requires a lot of adjusting. It’s not an instrument that you can just pick up and play. There is a lot of tuning and little adjustments that have to be done. It also reacts a lot to changes in temperature, especially humidity. It’s a mechanical instrument so there are lots of moving parts. It’s bowed by a wheel instead of an external bow. And the wheel sits inside the instrument and comes through a hole in the soundboard. With a violin you adjust the bow pressure yourself. With a hurdy-gurdy you adjust the pressure with the strings on the wheel and you cannot change that while you are playing — that needs to be adjusted mechanically. So as a hurdy-gurdy player you spend a lot of time adjusting that geometry so that the sound is optimized. You spend a lot of time fiddling and there are lots of little parts, so that is the most challenging thing. Sometimes you just want to sit down and play but you always have to be doing the maintenance work.

In the end it’s no different then a double reed player who constantly has to make adjustments to the reeds. For course you can change reeds if one doesn’t work, but it belongs to that category where the player has a large role in the upkeep of the instrument. You have to learn to be your own repairman. Especially when you are on the road so I always travel with knives and superglue.

MT: Final question, how many professional hurdy-gurdy players are there?

TM: That a good question. In Europe there are quite a few but in really varied types of music. It’s an instrument that has remained popular in traditional music in lots of different cultures. I can think of almost every country in Europe where there is at least one person playing professionally. There are also several players who are playing very avant-garde music too. But in the field of early music there are very few. There are two or three of us who are playing baroque hurdy-gurdy. So it’s a very small, specialized field. There is a lot of music from that period — there was more music published for the hurdy-gurdy then there was for the flute, recorder or the oboe. A lot of the music that we play on wind instruments was written for hurdy-gurdy or musette, but it is specialized and you need a different instrument then you need for the other types of music.

END_OF_DOCUMENT_TOKEN_TO_BE_REPLACED

Rodgers & Hammerstein’s Cinderella was originally produced for television in 1957 — seven years after the animated Disney film was released — and starred Julie Andrews. According to the Rodgers & Hammerstein website, it was viewed by over 100 million people. END_OF_DOCUMENT_TOKEN_TO_BE_REPLACED

The story line has its origin in an 1855 play and an 1842 farce that Thornton Wilder mined for his 1938 play The Merchant of Yonkers. When that turned out to be a flop, in 1954 Wilder made the crucial decision to re-center the show around the character of the legendary marriage broker Dolly Gallagher Levi and renamed it The Matchmaker. END_OF_DOCUMENT_TOKEN_TO_BE_REPLACED

The Dodero Center for the Performing Arts at the Gilmore Academy in Gates Mills is one feature of an impressive campus. The auditorium is shallow, the stage is deep, and the ensemble played without a shell. Throughout the program, the sound, especially in instruments’ lower registers, tended to disappear. END_OF_DOCUMENT_TOKEN_TO_BE_REPLACED