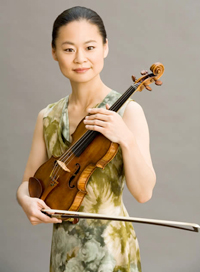 imagine a concert as a layered Viennnese dessert, Midori’s offering at CIM Monday evening might be called Ludwig à l’avant-garde: three rich layers of Beethoven separated by thin, piquant fillings of Webern and Crumb (I will resist the pun on the latter). Midori included Cleveland as she celebrates her 30th year of concert performing with an extended set of tours featuring recitals of solo Bach, concertos of Brahms, Beethoven, and Hindemith, and recital programs around the US and Europe.

Collaborating with the excellent Turkish pianist Özgür Aydin, Midori played with stunning control. With her impeccable bowing, she manages to move instantly between tumult and serenity, creating a powerful sense of contrast — essential for Beethoven. Her long lyric lines were particularly moving, the notes perfectly clear in themselves and yet tied together with utter grace.

For a program so heavily invested in Beethoven, however, the payoff was not as great as I had hoped. Three sonatas (no. 2, no. 6, and the Kreutzer — all in A Major, at least nominally) are a lot of Beethoven for one evening. The first two sonatas — played in the first half — were graceful and elegant. Midori’s fairly thin tone served the classical style well.

But in the great, and more romantic, Kreutzer Sonata, the duo did not take enough risks. Played impeccably, it nonetheless lacked the lightning that struck Tolstoy upon hearing it in 1888 and led him to write the passionate story based on the sonata.

Part of the problem was the balance. Aydin, appropriately, did not hang back, but on the concert Steinway his contribution was almost always one level louder than Midori’s.

Programming did not help. To put the Kreutzer at the end of a long recital is a mistake: performers and audience alike need to be fresh for such a substantial and demanding piece.

Between the layers of Beethoven were two sets of works in a very different style. In the first half, we heard a focused, intense performance of Anton Webern’s Four Pieces from 1910, one of several sets of miniatures in which Webern pared Romanticism into a spare Modernist clarity.

Opening the second half were four nocturnes by George Crumb, evocative soundscapes of great beauty, full of unusual techniques for both instruments (the pianist spent most of his time plucking and striking various internal parts of the instrument).

In 2012, neither Webern nor Crumb constitute “new” music. But they are still radical to many tastes (including, I might guess, those of the half-dozen very young, smartly dressed girls in the audience — presumably violin prodigies themselves). I would have welcomed more such music in the program, music that so clearly challenges the ear and reshapes the impact of the classics.

Jackson began the program with a recitation of Langston Hughes’ poem “Helen Keller” — the first of five poems by Hughes that served as interludes between each piece on the first half. END_OF_DOCUMENT_TOKEN_TO_BE_REPLACED

Pianos with pins and tape on strings, a bass drum and tam tam, crotales, Almglocken, and vibes. Microphones were hooked up all around the instruments. The feed was sent to speakers around the room. Lighting designer Nicholas Houfek hung incandescent globes over the arrangement of instruments from thin black wires stretching across the beams. END_OF_DOCUMENT_TOKEN_TO_BE_REPLACED

From the podium, Elim Chan set an ambitious tone for the evening. The rising star conductor, here in her Cleveland Orchestra debut, has a commanding style, and every twist and turn in Saturday’s performance tracked closely with her baton. END_OF_DOCUMENT_TOKEN_TO_BE_REPLACED