The competition is the brainchild of Chris Auerbach-Brown, MOCA’s Media Program Manager, who in a recent telephone conversation said he came up with the idea while thinking of ways to present contemporary music to audiences in different contexts rather then the traditional sit and listen format. “My thought was to take a pre-existing popular television show model and apply it to a contemporary music concert, and this is what I came up with.”

Auerbach-Brown was quick to point out that this is not MOCA’s first venture into the competition world. “We’ve had similar kinds of shows over the last couple of years, but they involved fashion, not music. There was one called Project MOCA, which was built off of Project Runway, but ours were student based and were very successful.”

The competition also presents MOCA the opportunity to form new collaborations with two of the area’s music schools. “I chose Baldwin Wallace and Cleveland State largely because MOCA, at least on a musical level, has never really collaborated with either institution. We’ve worked a lot with the Cleveland Institute of Music and Oberlin, so collaborating with BW and CSU is something new for us.”

As with all competitions, The Avant-Garde Idol has its ground rules, the first being a prescribed instrumentation. The new music ensemble Ars Futura
who will be performing each of the compositions, comprises musicians who play flute, violin, cello, clarinet and piano. “Students were able to write for the full complement of instruments or any subset there of,” said Auerbach-Brown, who added that each piece could be up to five minutes in length. “The five-minutes-and-under length requirement does a couple of things for us. It requires students to put their best foot forward in as immediate a manner as possible, and it also makes the length of the recital more manageable.” 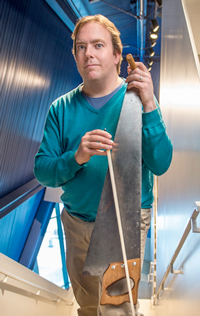 Auerbach-Brown began his conversations with BW composition professor Clint Needham and CSU professors Andrew Rindfleisch and Greg D’Alessio in November and he received the newly composed works at the beginning of March. “All of the composing was done in advance in order to give Ars Futura enough time to learn the pieces. And the student composers were also given the opportunity to attend a rehearsal.” Meet the contestants here.

The evening’s judges will include the Cleveland Institute of Music’s Keith Fitch, Case Western Reserve University’s Eric Charnofsky, and Cavani Quartet violinist Annie Fullard. “There are no pre-determined criteria for the judging process. I haven’t asked them to consider X, Y and Z, they’re just three individuals bringing their thoughts,” said Auerbach-Brown. “Keith and Eric, as composition teachers, already know what they are looking for — as does Annie, but she will be approaching it from the vantage point of a performer. Eric does have his feet in both worlds. He’s a great pianist as well as a composer. And while Keith is now strictly a composer, at one point in his life he was a performer as well.”

What format will the evening follow? Following each performance, each judge will have one minute to make comments and the audience will also have the opportunity to comment. And it will be emcee Mark Satola from WCLV 104.9 FM who will be in charge of keeping everything moving.

Auerbach-Brown points out that if Thursday’s competition is anything like the TV show, the judges’ favorites and the audience’s favorites will end up being different. “I think that’s great and it will add another level of interest to the program and will make for more conversation.”

Ultimately, how will the first Avant-Garde Idol be chosen? “There will be paper ballots inserted into the programs and the audience should have their top three picks listed at the end of the first half of the concert. So we’ll be spending intermission frantically counting ballots,” Auerbach-Brown said with a laugh. “Following intermission the top three audience favorite works will be performed again, this time without comments. And at that point the audience will choose the winner. So in the end it is only the audience that picks the winner.”

In addition to being a great educational experience for the student composers, Auerbach-Brown thinks will also be educational for the audience. “It will be great for them to hear what Keith, Eric and Annie have to say about what it is that they look for when critiquing a musical composition.”

The Avant-garde Idol will have his/her piece performed by Ars Futura three times over the next two years in addition to other perks provided by MOCA. The second place winner will also get a second performance of his/her piece. All of the participants will receive perks from MOCA as well.

Published on ClevelandClassical.com April 7, 2014
Click here for a printable version of this article.
Return to the website.

Jackson began the program with a recitation of Langston Hughes’ poem “Helen Keller” — the first of five poems by Hughes that served as interludes between each piece on the first half. END_OF_DOCUMENT_TOKEN_TO_BE_REPLACED

Pianos with pins and tape on strings, a bass drum and tam tam, crotales, Almglocken, and vibes. Microphones were hooked up all around the instruments. The feed was sent to speakers around the room. Lighting designer Nicholas Houfek hung incandescent globes over the arrangement of instruments from thin black wires stretching across the beams. END_OF_DOCUMENT_TOKEN_TO_BE_REPLACED

From the podium, Elim Chan set an ambitious tone for the evening. The rising star conductor, here in her Cleveland Orchestra debut, has a commanding style, and every twist and turn in Saturday’s performance tracked closely with her baton. END_OF_DOCUMENT_TOKEN_TO_BE_REPLACED