At 2:00 pm in the Reid Gallery, Quire Cleveland will begin with a work from the 15th century, There is no rose, followed by Josquin des Prez’s Ave Maria, which Duffin describes as one of the composer’s iconic works. The performance continues with an extended piece in carol form from the Court of Henry VIII, Quid petis, o fili? byRichard Pygott. “It’s about Mary speaking to her child,” says Duffin. “It’s an intimate, imagined conversation and very appropriate to the Mother and Child theme.” A Spanish Christmas piece from the 16th Century, E la don don, was printed in Venice in 1556 in the Cancionero de Upsala and survives in only one copy. Duffin says it’s a lively piece that will feature solos by Quire’s male singers. 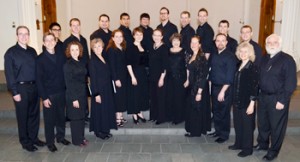 Next up are two lesser-known works of Palestrina. Although it was published, the manuscript for Alma redemptoris mater has since disappeared. Regina caeli was sung at St. Peter’s in Rome, “not by the Sistine chapel choir, but by the Choir of St. Peter’s which Palestrina directed,” says Duffin. “Because it was never published in the 16th century it’s not as well known as it should be. It’s a great thing for us to be able to present works that have somehow slipped through the cracks but are exquisitely beautiful.”

Duffin and Quire will conclude the program with a 20th century piece, Herbert Howells’s A spotless rose, a translation of the Es ist ein Ros’ entsprungen text of Michael Praetorius. “It’s always been one of my favorite carols so I’m thrilled to have Quire do it.”

The audience will then move to the museum’s spectacular atrium where the Cleveland Orchestra Youth and Children’s Choruses will sing music by Arvo Pärt, Gian Carlo Menotti, John Rutter and Morten Lauridsen, among others.

The afternoon will conclude in Gartner Auditorium with a performance of Britten’s Ceremony of Carols by the sopranos and altos of Trinity Cathedral Choir under the direction of Todd Wilson and featuring harpist Jody Guinn. 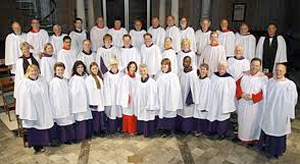 Ceremony was written in 1942 while the composer was on a ship going back to England from the United States during World War II. Todd Wilson says “how Britten wrote such a sunny and carefree piece of music under those circumstances has always amazed me.” Wilson describes Ceremony of Carols as one of Britten’s most endearing pieces. “It’s timeless in all the best ways. It’s one of those pieces that I could hear every week and never get tired of it.”

2013 marks the centenary of Britten’s birth and Wilson thinks the composer’s choral and vocal music is, “not to use an overused word, but it is unique. Nobody else sounds like Britten. He sets texts that most other composers would not even choose to set to music. He had an uncommon sense for how music and words might best be joined together and certainly you see that in A Ceremony of Carols. All these little gemlike pieces are perfect on their own and they go together to make such a lovely cycle. His music has such integrity as well. It’s honest stuff even though it may not be complex in an overt way. It’s so satisfying for both performer and listener.”

Before the performances, Stephen Fliegel, curator of medieval art, will present a pre-concert talk on Virgin and Child imagery at 1:00 pm in the Recital Hall.

END_OF_DOCUMENT_TOKEN_TO_BE_REPLACED

Rodgers & Hammerstein’s Cinderella was originally produced for television in 1957 — seven years after the animated Disney film was released — and starred Julie Andrews. According to the Rodgers & Hammerstein website, it was viewed by over 100 million people. END_OF_DOCUMENT_TOKEN_TO_BE_REPLACED

The story line has its origin in an 1855 play and an 1842 farce that Thornton Wilder mined for his 1938 play The Merchant of Yonkers. When that turned out to be a flop, in 1954 Wilder made the crucial decision to re-center the show around the character of the legendary marriage broker Dolly Gallagher Levi and renamed it The Matchmaker. END_OF_DOCUMENT_TOKEN_TO_BE_REPLACED

The Dodero Center for the Performing Arts at the Gilmore Academy in Gates Mills is one feature of an impressive campus. The auditorium is shallow, the stage is deep, and the ensemble played without a shell. Throughout the program, the sound, especially in instruments’ lower registers, tended to disappear. END_OF_DOCUMENT_TOKEN_TO_BE_REPLACED