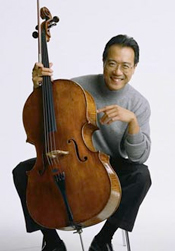 “I can’t say that I don’t lead an interesting life,” cellist, humanitarian and Silk Road Project founder Yo-Yo Ma says with a laugh. “It’s sometimes a little crazy and when that happens I just need to look at myself and say, I am the one responsible for it and I can’t blame anybody but myself.”

Yo-Yo Ma is a person who enjoys building relationships and finding common ground with everyone he meets, and it their mutual love of travel that he attributes to the long collaborative relationship he has enjoyed with Kathryn Stott. Ma and Stott have been sharing stages since 1985 and together won Grammy Awards in 1999 and 2004.

“Kathy loves adventures and we get along famously well. She is an incredible person and musician and she probably loves traveling or has traveled more then I have,” Ma says. “She has walked in Sri Lanka, she’s walked the Great Wall for causes like breast cancer. She’s been to India, Zimbabwe and performed in Saudi Arabia. It’s hard to name a place that she has not been to because she has this lust for traveling and experiencing our world. And I think she is also someone who has followed her passions.”

Ma and Stott have many shared experiences of traveling the world including trips to Argentina, Brazil and across South America – travels that have influenced their choice of repertoire for Wednesday’s concert. “I think our deep love of Piazzolla and the Brazilian composers like Villa Lobos come from our experiences there and the friendships that we’ve developed with people like the Assad brothers.”

Ma points out that even when they are not touring together they continue to share travel stories. “We do check in with one another — what’s happening on in your life, what have you learned? That’s a great way to grow. And when we tour together we kind of download a lot of our experiences and they end up in the music. Then we go away and come back together. So over all of these years this has been a very fruitful relationship.”

On the eve of our conversation Yo-Yo Ma performed in concert in Boston’s Symphony Hall where 90-year-old Holocaust survivor George Horner made his orchestral debut, featuring music composed 70 years ago at the Nazi prison campTerezin where Horner was incarcerated.

“To be with this man was an honor and privilege. What can I say? George has a great sense of humor and his being alive is such a triumph for the human spirit. He attributes that spirit to the importance that music played in his life. He really thinks of that as the best medicine. He was in such dismal conditions and he took to music because it was a world of hope, warmth and comfort when there wasn’t any.”

Ma adds that it was great to see Horner with his two sons and grandchildren because they all love music. “He’s just an enlightened human being. It’s such a treasure to meet a person [like him] – there are not too many people who have not only survived the Holocaust but who are also in such great spirits and so positive.”

There is no better example of Ma’s lifelong interest in world cultures then the Silk Road Project, through which he continually realizes and renews his passion for exploring music from around the globe. The Ensemble has recently released their new CD, A Playlist Without Borders. But how does he know whether or not a musician is the right fit for the ensemble? “I think it’s because friends are drawn to one another because they have similar values. That friendship you could say is based on skill level and virtuosity, but I think that every one of the Silk roaders are generous people and again they are interested in the world, exploring it and sharing what they discover.”

“I do believe totally in what I’m trying to do,” Ma says, “and I feel incredibly grateful — especially during these hard economic times. The world is changing so quickly and there are people left out. But we want to make sure that while things are changing, we have a sense of where we are going that we can all mutually work towards.”

Ma says that is where culture and the arts are effective because as artists you are always working toward something bigger then yourself. “It’s not just about interest groups but rather that we have common interests. And sometimes the common interests get lost when we’re only saying wait, you’ve got to look at me.”

Ma feels lucky to have a job that enables him to point to other musicians who also have incredible talents. “People who are also generous with those talents so that we can create communities that really know how to collaborate and together imagine a future.”

It might seem that there’s not a lot left to discover after three decades of experience with the Red Priest’s charming and evocative score, but this performance boasted a secret weapon: the young Spanish violinist Francisco Fullana, now the Orchestra’s artist-in-residence, whose affecting personality and easy virtuosity raised the solo part a quantum leap above the merely extraordinary. END_OF_DOCUMENT_TOKEN_TO_BE_REPLACED

END_OF_DOCUMENT_TOKEN_TO_BE_REPLACED

The Cleveland Orchestra’s second performance of the new season on Sunday afternoon, October 17 at the newly renamed Mandel Hall at Severance Music Center was just such an occasion. If the ensemble’s return to public concerts under the baton of Franz Welser-Möst wasn’t enough reason to light a bonfire, the Cleveland debut of a new work written for one of the Orchestra’s most popular soloists, and the swan song of one of its longest-serving members added extra fuel to the celebration. END_OF_DOCUMENT_TOKEN_TO_BE_REPLACED