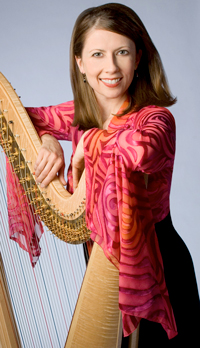 “I don’t know what it is about Ravel’s music that resonates with me so much,” says harpist Yolanda Kondonassis. “But it’s like that hopeful melancholy, yet it’s so full of energy at the same time.” On Tuesday, November 5 at 8:00 pm in Finney Chapel, the Oberlin Artist Recital Series begins its 2013-14 season with Ravel: Intimate Masterpieces, featuring some of the composer’s most sublime works: Introduction et Allegro, Cinq Mélodies Populaires Grecques, Chansons madécasses and the String Quartet in F. In addition to Kondonassis, performers include Ellie Dehn, soprano, Richard Hawkins, clarinet, Spencer Myer, piano, Alexa Still, flute and the Jupiter String Quartet.

The concert, inspired by a recent recording by the performers, all of whom have an Oberlin connection, was a project that was a long time in the making largely due to logistics, Kondonassis told us by telephone.

“But I never shy away from a complicated project. I play the harp, so complication is my specialty.” She also says that this particular group of pieces is music that never gets old. “I don’t know if this combination of works has ever been recorded on one album. But I think Ravel achieves such a particular atmosphere of music in his more intimate combinations.”

One of Kondonassis’s early remembrances of the string quartet came early on, “I’ve loved the Quartet ever since I was kid. I remember hearing the Vermeer Quartet play it at the Bay Chamber Festival in Maine. And I thought that placing it next to Introduction and Allegro was a great way to juxtapose similar but varied pieces showing his grasp of color and texture. You can tell they’re both Ravel but they’re very original works.”

Both the Cinq Mélodies Populaires Grecques and Chansons madécasses were new to soprano Ellie Dehn’s repertoire. Dehn, who spends most of her time on the stages of some of the most renowned opera houses, relished the chance to perform in a chamber music setting. “When we go to conservatory we sing art song and chamber music and that is what really shapes our musical experience. But once we get out into the world, recital work is few and far between.” Dehn says it was fun for to get to record Chansons madécasses with such an outstanding group of musicians. “And Yolonda, I think she is the most recorded harpist alive, so if you are going to record the Greek Songs with harp, it was incredible to get to do it with her.”

Although Kondonassis has performed the Greek songs on two occasions, programming them is difficult because she doesn’t tour regularly with a vocalist. “I love them and they are sort of the lighter side of Ravel. And being Greek, I couldn’t leave the earth without recording them.”

Both performers feel that Ravel is all about color. For example, Dehn says “the madécasses have this strange eery color that kind of takes you on this journey. Every voice means something different and I feel like all of the instruments have their own voice. Even the piano’s interjections here and there all have a different flavor. It’s hard for me to find things to say that are quotable and insightful because every time I listen to them I hear something new or I hear something that shakes me.”

Kondonassis admits to being asked to perform the Introduction and Allegro multiple times a year, “so out of necessity I have to find something fresh each time. Beyond that, the piece was on my first Telarc recording. I guess that if you do something long enough you do get a second visitation at things. I listened to the two recordings and I do hear the maturation that has gone in the last 21 years since I made the first recording. So it was cool for me to get to do it again.”

1.Why is Ravel’s music so incredibly suited to the harp?

I’m nor sure except that some composers seem to have a sensibility about certain instruments. And I think the fact that Ravel conferred with Carlos Slazedo who had a few editorial suggestions for Introduction and Allegro, which Ravel was completely open to. That’s also the reason I feel it is very legitimate to record the Greek Songs with harp (they were originally for keyboard) because again Salzedo worked with him during the transcribing to the harp. Ravel was delighted by it and apparently said that he wished he had originally written it for the harp because it can bring so much more color.

From all that I have read about Ravel, he was his own thinker and traveled to the beat of his own drum. But at the same time I think he was fairly open to learning and I think he was a relatively practical man.

You do find composers who really do not want to be limited by an idiom. And what they end up being is incredibly limited by the idiom because their music just isn’t playable. So when you find that marriage of curiosity and practically in a composer along with the creativity and genius — and because they have done their homework — then you can get music you can really play on the harp. And Ravel was both curious and practical when it came to the harp.

2. Given that you are a student of the great harp teacher Alice Chalifoux, who was a student of Carlos Salzedo, do you feel a direct line in the legacy?

Sure I do – absolutely. I feel a great connection to that legacy. There was great structure in Salzedo’s thought and approach to the harp. All you can ever hope for when you come from a legacy — and I feel that I do — is to take in all that information, and learn from what people learned before you.

I don’t think much can evolve unless we learn copiously from those who have come before us. Then adapt it to the times and to further exploration and keep it going so that the basic pedagogy and thought isn’t static in time. When we try to reinvent the wheel just to do so, we lose the benefit of everything that those before us learned. 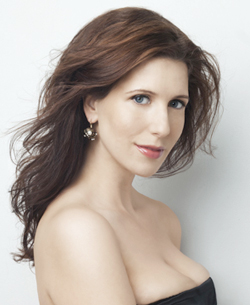 We reached Dehn by Skype in Italy where she was performing the role of Fiordiligi in Così Fan Tutte.

Mike Telin You studied with Daune Mahy while you were at Oberlin.

Ellie Dehn: Yes and everybody loves her. She is just such a positive cheerleader. And I can’t believe that I’ll be back and we’ll all be getting together again very soon.

MT: I love the CD. It must have been fun to record.

ED: It was, and for me, recording it at Oberlin was kind of like coming home and returning to the roots of why I wanted to do this music stuff to begin with. But yes, it was fun to do the recording, I think that everyone having an Oberlin connection did make us feel relaxed. And the fact that we were able to rehearse and put it all together in five days – that was incredible.

MT: You have a very busy opera career, but have you thought about performing more recitals?

ED: I am very lucky – I don’t have to have another job and I can do this all year round. But as far as recitals, I did one last year in Mexico and I’d like to do more and I would like to put together an idea for one just to have at the ready. But again it is kind of supply and demand. Because to sell out a recital, there would have to be a lot of wheels in play and people coming together so it would be a big project. But I’m always open to it.

MT: I do need to ask about all your appearances on A Prairie Home Companion.

ED: It was all so random. Garrison Keillor was in the audience at the Metropolitan Opera when I was singing Donna Elvira in Don Giovanni. At the curtain call he looked at the program to see what my name was and noticed that I was also from Anoka, Minnesota. So he got ahold of the Met staff and said I have to have her on my show. And now I’ve been on five times. He’s great and everyone there is just a hoot. And it’s so totally different from opera. The show is put together in 24 hours and he writes new lines of text while the show is happening.

It’s one of the few remaining old school variety shows. And because I am a Midwesterner [at heart] it is exactly the kind of stuff that I dig. I love doing it. I grew up listening to his show, reading his books. On road trips we listened to how to talk Minnesotan. He is a local hero.

Jackson began the program with a recitation of Langston Hughes’ poem “Helen Keller” — the first of five poems by Hughes that served as interludes between each piece on the first half. END_OF_DOCUMENT_TOKEN_TO_BE_REPLACED

Pianos with pins and tape on strings, a bass drum and tam tam, crotales, Almglocken, and vibes. Microphones were hooked up all around the instruments. The feed was sent to speakers around the room. Lighting designer Nicholas Houfek hung incandescent globes over the arrangement of instruments from thin black wires stretching across the beams. END_OF_DOCUMENT_TOKEN_TO_BE_REPLACED

From the podium, Elim Chan set an ambitious tone for the evening. The rising star conductor, here in her Cleveland Orchestra debut, has a commanding style, and every twist and turn in Saturday’s performance tracked closely with her baton. END_OF_DOCUMENT_TOKEN_TO_BE_REPLACED