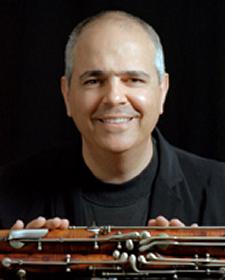 At a time when cultural institutions are jumping through any number of hoops to try to break down barriers between artists and audiences, it’s kind of refreshing to find yourself standing in line at the washroom before an orchestra concert next to the featured composer of the evening. That was Peter Schickele, who was at Finney Chapel last Friday evening to hear Oberlin bassoon professor George Sakakeeny play his Concerto for Bassoon and Orchestra with the Oberlin Orchestra under the direction of Rafael Jiménez on a program that began with Jacques Ibert’s Escales and ended with Claude Debussy’s La Mer.

The concerto was written in 1998 for Sakakeeny and the ProMusica Chamber Orchestra of Columbus and revised the following year. Peter Schickele plays the bassoon himself, so he knew what he was doing when he wrote this challenging piece for Sakakeeny, an artist who is a consummate technician as well as a fine, lyrical player with perfectly even tone from top to bottom of that difficult instrument’s range.

As Schickele has proven through his decade-long radio program, Schickele Mix, he has a lot of different streams of music running simultaneously through his head as well as the kind of droll sense of humor people from the upper Midwest seem to be born with. His style is of the sort that gets described as “eclectic” when a better word might be omnivorous.

The concerto is laid out in five continuously fresh-sounding movements during which the solo bassoon develops a complicated relationship with the orchestra. A friendly chat with the marimba at the beginning of “Blues” develops into a conversation where different instruments double the bassoon line and later pick out some of its notes to color them with their own timbres. The second movement (“Intermezzo”) starts off like a practice etude shared between piano and bassoon then turns into a tug of war between major and minor modes (no clear winner). Piano also figures at the beginning of the third (Scherzo) where the solo bassoon gets to sing a lyrical line before something like the “Peter Gunn” theme breaks out. Bluesy brass takes over and the movement seems to stop in mid-measure. “Song” features a winding lyric solo, and “Romp” is a zany, bassoon hoedown over repeated bass notes. Schickele continued to fascinate the ear throughout this colorful work.

George Sakakeeny took all of the concerto’s considerable demands in stride — including one rather startling, cadenza-like passage that swirled upward in a haze of notes then drifted down again. Jiménez and the orchestra were cheerful and attentive companions on this very interesting voyage. Only once during the “Intermezzo” did some close, hocket-like exchanges between soloist and orchestra get slightly out of the groove.

Ibert’s Ports of Call served the role of an overture before the concerto, Ravel’s The Sea, as a non-traditional symphony to follow it. Ibert’s sonic evocations of Rome-Palermo, Tunis-Nefta and Valencia are charming and pictorial, if a bit predictable. Strings were lush and sensual, and limpid flute solos by Matt Slaughter and exotic oboe work from Ryan Jones were among many fine wind moments.

Debussy subtitled his seascape “Three Symphonic Sketches”, which is to understate both their breadth and depth. Jiménez and the orchestra gave the three pieces an eloquent reading with distinguished contributions from the splendid cello section, English hornist Tim Daniels and hornist Matt McLaughlin. This is a first-rate orchestra — all undergraduates, by the way — whose progress during the season will be satisfying to watch. One could pick at some details both of interpretation and execution (some string entrances had clear attacks where they should emerge out of nowhere), but it’s a sign of the prowess of the Oberlin Orchestra when the listener comes to expect totally professional results all the time.

END_OF_DOCUMENT_TOKEN_TO_BE_REPLACED

Concerts cancelled in 2020 may have put a brief gap in Ling’s record with the Orchestra (a program every season since 1984-1985), but the ensemble’s former resident conductor more than made up for it Sunday with a performance both commanding and personal. END_OF_DOCUMENT_TOKEN_TO_BE_REPLACED