“We have a very strong cast for the opera”, Sobieska said in a phone conversation. Two of those singers, bass Timothy J. Bruno (Don Basilio, right) and tenor Matthew Miles (Count Almaviva, center), are especially well prepared for Barber, having sung in Opera Western Reserve’s one-night production last November at Stambaugh Auditorium in Youngstown, a performance headlined by Lawrence Brownlee, one of the great bel canto tenors of our time.

“It was incredible to be doing a silly routine and turn around and realize you were doing it with Larry Brownlee”, said Bruno. Brownlee happens to be a Youngstown native, as is Matthew Miles, who covered for the famous tenor and sang his role for school performances. How has that Mahoning Valley community produced two Rossini tenors in close succession? “My teacher says there must be something in the water,” Miles told us. Another veteran of the November production is bass-baritone Jason Budd, who will appear again as Dr. Bartolo.

Tim Bruno, who is based in Toledo and will make his Opera Circle debut this weekend, also has another Barber in his resumé, but he sang a different role in a production with Michigan Opera Theater. He recently performed the role of Masetto in Toledo Opera’s Don Giovanni and has upcoming engagements with Indianapolis and Cincinnati Opera. And he just learned this week that he’ll be singing Wotan in Die Walküre — his first Wagner role — with Union Avenue Opera in St. Louis next summer.

Matthew Miles is just beginning his career and has a day job fundraising and organizing special events for Long Beach Opera in California. “I’m waiting for the appropriate time to apply as a singer, but I don’t want to blur the lines,” he said. Count Almaviva is a big challenge. “It’s the most difficult role I’ve ever had to sing. I’ve had to work since August to get each note into the voice, but covering for Larry Brownlee was fantastic, and that helped.” Miles will perform the role of the Chevalier de la Force in Poulenc’s Dialogues of the Carmelites in an upcoming production at the University of Southern California, where he is a graduate assistant. 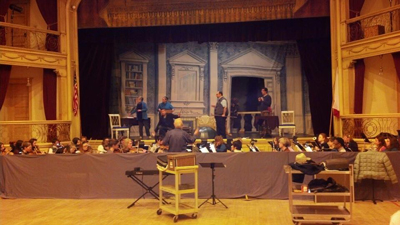 What are the differences for directors and singers between staging a comic versus a serious opera? Dorota Sobieska, who will both direct and sing the role of Rosina, finds comic more complicated. “Comedy takes a lot more staging than tragedy. There will be three of us handling the staging: Jason Budd, myself and Bob Cronquist, who is also in charge of the sets and covers the visual territory. We divide those duties very naturally.”

But Sobieska also allows that much of the success of comedy depends on the natural talents of the singers. “They either have a facility for humor or they don’t, and we’re very lucky with this cast. The singers feel comfortable being wild and ecstatic.”

Tim Bruno agrees. “Especially with Don Basilio, you have to be silly and ridiculous, wild and crazy in a way you never get to cut loose in a serious opera.” “It’s more about putting on a show with Rossini”, Matthew Miles notes. “In serious opera you never break character. With Rossini, you suddenly turn your body and sing twenty-five bars of coloratura.” Bruno enjoys playing off his character with Jason Budd’s. “We have a rapport, but every production is different. Even if you’ve seen Barber before, it’s always a new experience with a different flow.”

Opera Circle’s Barber of Seville is short on women onstage — just Sobieska as Rosina and Diana Farrell as Berta — “but with the Cleveland Women’s Orchestra in the pit, we’ll achieve a nice balance,” Sobieska says. “The purpose is to do something with the community.” In that same community spirit, tickets for Barber are free for children and youth. “It’s a very suitable show for families and people of all ages.”