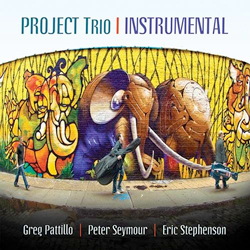 It’s not easy to be unique. In music especially, it seems like every good band name has already been taken, every genre tried (witch house anyone?), and every ensemble “sound” already stamped by someone else. Even so, I don’t know of another group like PROJECT Trio, which consists of a cellist, double bassist, and beat-boxing flutist, all classically trained, who play jazz, classical, Latin, and a combination of those and other genres.

But idiosyncratic instrumentation and style don’t remove an artist from other influences. Instrumental, PROJECT Trio’s latest recording for their label Harmonyville Records, contains buoyant and groove-based songs that often seem to reference other artists or genres, but played on flute, cello, and bass.

Despite the hodgepodge of styles on Instrumental, many of the tracks share a pleasing effervescence. It’s easy to imagine many of these songs soundtracking Sesame Street, with their sunniness, playfulness and unpretentious pleasure. The best instance of this is Now, which has the catchiest groove and cello lines from Eric Stephenson that recall Yo-Yo Ma’s Goat Rodeo Sessions. 99 Mondays is a refreshing, atmospheric track built off Greg Pattillo’s overlapping flute curlicues and Peter Seymour’s resounding bass notes that calls to mind the classical pieces of Bryce Dessner or Richard Reed Parry. 2against3, with its painfully obvious title, uses the eponymous cross-rhythm as accompaniment for a simple and tender melody. It’s also an instance of one of this recording’s weaknesses: many of the songs are disjunct, with middle sections that sound like a new song reliably appearing halfway through many of the tracks.

Beyond those three highlights, there is a final standout that discards the lightness of the others. A moody, Radiohead-esque vibe pervades BRB, which is also the most adventurous song on the album. Stephenson’s cello is processed with various effects like echo and distortion and Pattillo relaxes into a laid-back groove with his beat-boxing.

The album also gains cohesion from a pervasive easy jazz feel. The asymmetrical melody of Sloeberry Jam becomes the basis for an energetic, seemingly improvised flute solo. Andre Victor Correra’s Andres de Sapato Novo parades some festive Latin jazz through the middle of the album, while the following Shir takes a similar feel and glums it down. The Anthem features some jazzy flute licks over a percussive effect that sounds like Pattillo violently sucking air through his flute.

The title of Djangish presumably refers to the great jazz guitarist Django Reinhardt, and has the spooky, gypsy vibe one might expect. Both those gypsy and jazz influences crop up in Brahms’s Hungarian Dance No. 5, the weakest point of the album. It comes off as cheesy and unsteady with its free and not quite coordinated sense of time, while the jazzy middle section feels out of place.

The other classical piece, Saint-Saëns’s “Bacchanale” from Sampson and Delilah, is similarly unsuccessful. It’s a serviceable arrangement, but PROJECT Trio should stick to beat-driven songs.

The idea behind PROJECT Trio is intriguing, and its talented members have developed an appealing, idiosyncratic sound. Instrumental is a pleasurable recording, but now they need to translate that sound into original songwriting.

“Mary’s Song” refers to the Magnificat (“My soul doth magnify the Lord”), sung by the soon-to-be mother of Jesus in response to the message the angel Gabriel delivered to her in the Gospel according to Luke. The text has been set countless times by composers in all eras, largely because the Magnificat is one of the invariable texts in the daily service of Vespers, as well as its Anglican relative, Choral Evensong. END_OF_DOCUMENT_TOKEN_TO_BE_REPLACED

Music director and conductor Daniel Meyer built his playlist around Cleveland themes and scenes. “Exploration CLE” made use of engaging selections from the classical canon and beyond that celebrated “what makes Cleveland so special.” Happily, he and his musicians avoided constructing a visual slide show, choosing to let the music speak for itself. END_OF_DOCUMENT_TOKEN_TO_BE_REPLACED

You could see the relationship at work on a practical level. Repertoire for two players at the same piano requires a certain choreography. There’s just one of each pedal to share, and the hand crossings left and right — which can be so fun to watch a soloist pull off — get more complicated when another person’s involved. At times, Pompa-Baldi drew a hand away from the keyboard and into his body, making room for Friscioni, and at the close of a few delicate phrases, the two were crouched together over the same final notes at one end of the instrument. END_OF_DOCUMENT_TOKEN_TO_BE_REPLACED