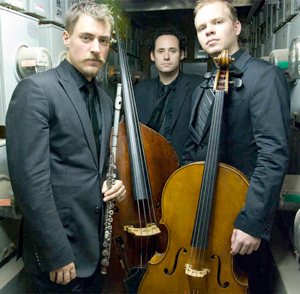 Oberlin Conservatory students packed Stull Recital Hall on Thursday, February 5 for a performance by Brooklyn-based chamber music ensemble PROJECT Trio. The group, made up of flutist Greg Pattillo, cellist Eric Stephenson, and bassist Peter Seymour, met while studying at the Cleveland Institute of Music, and now they are performing concerts around the globe. In their return to Northeast Ohio, they brought their distinctive style of music-making and their accompanying message of charting a unique pathway in the world of music.

Incorporating jazz, blues, pop, rock and classical music into their compositions, the trio bring a contagious joy to performing. Whatever you think of this musical mash-up, they are clever — and they don’t shy away from being entertaining. They infuse their performing with a constant physicality and hipster banter. Their bopping, dancing, drumming, strumming, and twirling of instruments continues even while talking to the audience.

Stull Recital Hall is a good room for an intimate chamber concert. The close range of the audience enhanced the energy and antics of the performers, but the hall’s lack of an elevated stage gave limited sight lines to the visual event the trio creates while performing.

I must confess that having been exposed to the beatboxing style of flute playing which made this trio famous, I was anticipating a more tedious concert. I thought that the first few minutes would be enjoyable and the rest of the concert would be spent enduring a limited musical sameness, but I was delighted to be proven wrong.

It’s obvious that the trio spends an enormous amount of time playing together. The details of the program were meticulously worked out, from the arrangements of the music played to the accompanying banter and slapstick.

Their Oberlin concert included a wide swath of musical influences, from legendary jazz guitarist Django Reinhardt to a tune by hard rock group Guns N’ Roses and a Hungarian Dance by Johannes Brahms, all in the group’s own arrangements. At one point, while playing a composition inspired by the rock group Jethro Tull, Pattillo stood on one foot, tucking the other behind his knee in homage to flutist Ian Anderson.

The trio’s interpretation of Prokofiev’s Peter and the Wolf was particularly clever. Their remake of the classic tale stars teenagers Bird, Duckie and Peter, who like to hang out together in Brooklyn. Wolf is the juvenile delinquent type who lives on the other side of the park. This humorous reinvention of an orchestral work was enthusiastically received by a room brimming with young musicians. Kudos to Pattillo, whose adroit take on the classic bird solo was ingenious and well played.

Pattillo told the audience how the trio had difficulty finding music for their ensemble when they began playing together as students. Joking about how low that set the bar for the trio’s compositions, he described their process of writing together. “We turn on the recorder, play for an hour, then let it marinate for a few weeks.” Referring to the professional development session the trio presented earlier in the day, Seymour reminded students in the audience that they can draw inspiration from a variety of sources when putting a program together. He encouraged them to continue to “think outside the box” with their own musical aspirations. It was obvious that the students enjoyed hearing this message, and PROJECT Trio is certainly the group to deliver it.

“Mary’s Song” refers to the Magnificat (“My soul doth magnify the Lord”), sung by the soon-to-be mother of Jesus in response to the message the angel Gabriel delivered to her in the Gospel according to Luke. The text has been set countless times by composers in all eras, largely because the Magnificat is one of the invariable texts in the daily service of Vespers, as well as its Anglican relative, Choral Evensong. END_OF_DOCUMENT_TOKEN_TO_BE_REPLACED

Music director and conductor Daniel Meyer built his playlist around Cleveland themes and scenes. “Exploration CLE” made use of engaging selections from the classical canon and beyond that celebrated “what makes Cleveland so special.” Happily, he and his musicians avoided constructing a visual slide show, choosing to let the music speak for itself. END_OF_DOCUMENT_TOKEN_TO_BE_REPLACED

You could see the relationship at work on a practical level. Repertoire for two players at the same piano requires a certain choreography. There’s just one of each pedal to share, and the hand crossings left and right — which can be so fun to watch a soloist pull off — get more complicated when another person’s involved. At times, Pompa-Baldi drew a hand away from the keyboard and into his body, making room for Friscioni, and at the close of a few delicate phrases, the two were crouched together over the same final notes at one end of the instrument. END_OF_DOCUMENT_TOKEN_TO_BE_REPLACED