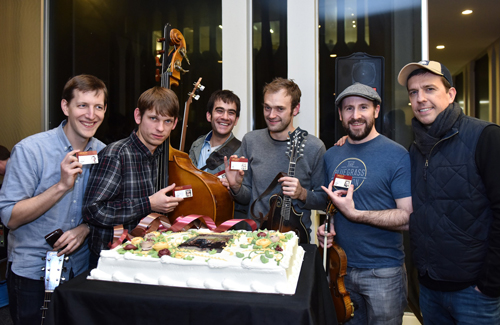 Packed tight on a Wednesday night, the Oberlin Conservatory Lounge played host to the Punch Brothers for their latest jam session on December 3. Joining the band were a legion of thirty-some college and conservatory musicians playing violin, trombone, oboe, double bass, accordion, djembe, and tuba, to name a few. A big crowd of fans snapping photos, shooting video, nodding, singing, and wiggling along helped keep the night going until near closing time.

Preceded by a songwriting session, a listening party, and two master classes over a three-day period, the jam session was the culmination of the progressive bluegrass ensemble’s December residency, their second year of visits to the Conservatory.

During the chamber music master class on Tuesday in Stull Recital Hall, the Punch Brothers coached three student groups through works by Prokofiev, Haydn, and Schubert. They focused on rhythm in the first movement of Schubert’s String Quartet No. 4 in C Major, which features difficult fast triplets. Punch Brothers violinist Gabe Witcher encouraged rhythmic breathing to help stay together, while double bassist Paul Kowert stressed the importance of individual practice with a metronome.

A long stretch of rests also gave the group trouble in pacing. “Two whole bars of rests — that’s pretty rad,” said mandolin player Chris Thile, advising them to try to get the audience to almost think the piece is over, but not quite. To tie off the class, the group pulled together the Punchy advice for an impressive run through the end of the movement. “Righteous,” said Thile, who remained to teach a Bach master class afterwards. 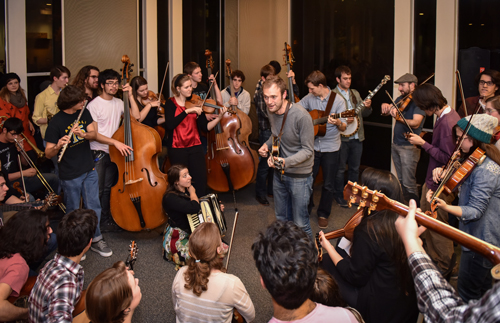 It’s safe to say Thile is the Energizer bunny of the Punch Brothers, and he proved an excellent, enthusiastic leader all the way through the jam session. He shaped what might have been complete chaos into loose structure, calling out chords and cueing soloists and groups even as he himself played and sang. For one brilliant moment in “The Twelve Days of Christmas,” Thile handed the reins to the lone tuba player, who led the way through a stately ninth day. And it probably goes without saying that the “five golden rings” got a whole lotta shredding love on the twelfth.

Another highlight was Fiona Apple’s “On The Bound,” which featured dueling flutes, a string section soli with appropriately iffy intonation, and the crowd going for it as a chorus on “dah”s. Thile had one word to say when he cut the room off before a return to the melody at the end: “Chaos.” Everyone with an instrument ripped in, and everyone who didn’t, cheered.

The audience shouted requests throughout the evening, and the Punch Brothers were more than happy to oblige, inviting people forward to take up the vocals on traditional American tunes like “Dink’s Song” and “There Ain’t No Grave (Gonna Hold My Body Down).” At the beginning of the night, the students held their own as a sort of opening act, as well. The Punch Brothers arrived a fashionable fifteen minutes past ten, and by then the students had already churned out energetic covers of MGMT’s “Kids” and Macklemore’s “Thrift Shop.”

Before the session, Kalyn took the opportunity to name the band Affiliate Scholars at Oberlin, granting them access to campus resources and facilitating continued collaboration with the school. They even got their own school ID’s, which they held up to raucous cheers at the end of the night. They were already Oberlin family, but Kalyn made it official.

With this work, premiered in 1907, Sibelius offered a bold departure from the explosive emotionalism so prevalent in late-Romantic era music. This symphony was a renewed embrace of Classicism’s purity of form and melody, and one that, oddly enough, left many initial audiences of the day somewhat bewildered. END_OF_DOCUMENT_TOKEN_TO_BE_REPLACED

After eating a Po’boy from The Dawg Bowl Cajun food truck, I caught the first half of Brian Culbertson’s show in The Connor Palace Theatre. END_OF_DOCUMENT_TOKEN_TO_BE_REPLACED