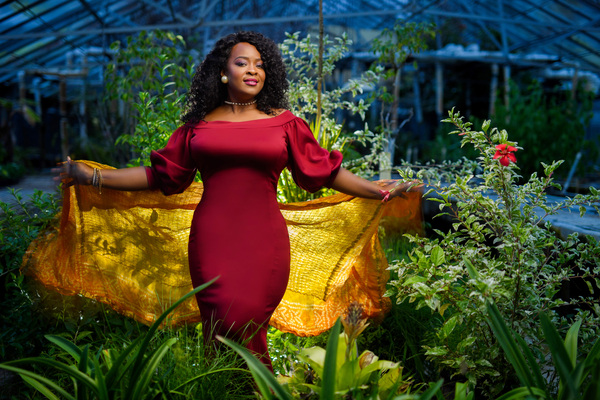 If you don’t know the outstanding vocalist Quiana Lynell, you need to.

I was first introduced to the exquisite artistry of this rising star back in November of 2018 when she was part of the premiere performance of Terence Blanchard’s OUR VOICES: DEMOCRACY RE:visited, commissioned by Tri-C JazzFest and Cuyahoga Community College. Since then I’d been most curious to hear her again.

On Friday, August 23 at the Bop Stop, Lynell, the winner at the 2017 Sarah Vaughan International Jazz Vocal Competition, proved that she is unquestionably the real deal during a 90-minute set that explored the many sides of love. Her rich, honey-hued voice along with her spot-on intonation and impeccable diction held the good-sized audience in rapt attention from her first note until the last.

Lynell was in full voice during Joshuah Campbell’s “Sing Out, March On,” and her sensual rendition of Barry Mann’s and Cynthia Weil’s “Just a Little Lovin’ (Early In the Mornin’)” had a je ne sais quoi that made you wish it would go on forever.

The vocalist’s commentary was well scripted, personal but not self-indulgent. In one moment, she simply asked, “What is love?” — introducing Monte Croft’s song of the same name. Here, Lynell and Meinecke delivered an arresting pas de deux. She showed her humorous side during Willie Dixon’s “I’m Built for Comfort, I Ain’t Built for Speed.”

This was a show to remember — it’s not often that 90 minutes fly by so quickly.

With this work, premiered in 1907, Sibelius offered a bold departure from the explosive emotionalism so prevalent in late-Romantic era music. This symphony was a renewed embrace of Classicism’s purity of form and melody, and one that, oddly enough, left many initial audiences of the day somewhat bewildered. END_OF_DOCUMENT_TOKEN_TO_BE_REPLACED

After eating a Po’boy from The Dawg Bowl Cajun food truck, I caught the first half of Brian Culbertson’s show in The Connor Palace Theatre. END_OF_DOCUMENT_TOKEN_TO_BE_REPLACED