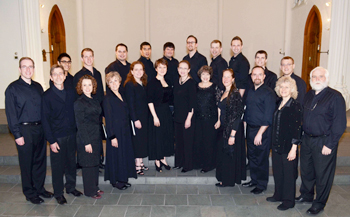 Quire Cleveland will begin its 2014-2015 season under its founder and artistic director Ross W. Duffin with three performances of “The Flower of Flanders: Masterpieces of Renaissance Polyphony.” The concerts, which will concentrate on Franco-Flemish composers of the fifteenth and sixteenth century including Josquin, DuFay, Lassus and Ockeghem, will take place on Friday, September 26 at 7:30 pm at St. Paul’s Episcopal Church in Cleveland Heights, on Saturday, September 27 at 7:30 pm at Mary Queen of Peace Church in Old Brooklyn, and on Sunday, September 28 at 4:00 pm at Historic St. Peter’s Church in downtown Cleveland.

For Quire’s sixth cycle of “Carols for Quire,” the professional vocal ensemble will join an ensemble of baroque instruments in Marc-Antoine Charpentier’s Messe de minuit pour noël, a midnight Christmas mass setting based on popular French Noëls, along with Duffin’s own arrangements of the traditional carols. Again, there will be three identical performances, on Friday, December 19 at 7:30 pm at Trinity Cathedral in downtown Cleveland, on Saturday, December 20 at 7:30 pm at Mary Queen of Peace Church, and on Sunday, December 21 at 4:00 pm at Historic St. Peter Church.

Canadian conductor David Fallis, artistic director of the Toronto Consort and Choir 21, will come to Cleveland as guest conductor for Quire’s third program on the Helen D. Schubert Concert Series at St. John’s Cathedral in downtown Cleveland on Friday, February 27. Fallis will be in residence for a week, preparing a program of settings of the Song of Songs or Song of Solomon from the last portion of the Hebrew scriptures ranging from the middle ages to the present.

Fans of Quire Cleveland can revisit performances from last season this fall when the ensemble will release compact discs of “The Land of Harmony: American Choral Gems,” and the 2013 “Carols for Quire” concerts.

Joining a long list of arrangers, Parker Ramsay has now transcribed the Variations for the modern pedal harp, an instrument for which he holds a master’s degree from Juilliard, in addition to a degree in history from Cambridge University, plus a master’s in historical performance (organ and harpsichord) and an artist diploma (organ) from Oberlin. END_OF_DOCUMENT_TOKEN_TO_BE_REPLACED

As organizations gingerly take steps to open up for business, it’s refreshing to have new content to listen to and write about after a solid six months of archival footage. END_OF_DOCUMENT_TOKEN_TO_BE_REPLACED

END_OF_DOCUMENT_TOKEN_TO_BE_REPLACED

Over the past few years, Brian Giebler has visited Northeast Ohio in settings both orchestral and choral, and with repertoire as diverse as Stravinsky, Bach, and the local premiere of a new work. In his impressive solo recording debut a lad’s love, released on Bridge Records, the New York City-based tenor turns his focus to British songs from the first half of the 20th century — a mix of cycles and individual works — and tops off the playlist with a touch of the modern. END_OF_DOCUMENT_TOKEN_TO_BE_REPLACED

To steal a phrase from the third-century Greek philosopher Sextus Empiricus, the mills of the gods grind slowly, but they grind exceedingly fine. The same goes for Deutsche Grammophon. It’s been a dozen years since they were recorded in Hamburg in 2009, but the German company has now issued fifteen Rachmaninoff piano pieces magnificently and poetically played by Sergei Babayan. END_OF_DOCUMENT_TOKEN_TO_BE_REPLACED

END_OF_DOCUMENT_TOKEN_TO_BE_REPLACED

After considering all its options, Cleveland’s period ensemble Les Délices decided to fully embrace the idea of creating pre-recorded “shows” in the place of live, in-person performances this season. END_OF_DOCUMENT_TOKEN_TO_BE_REPLACED