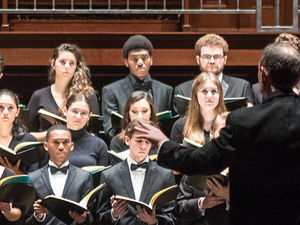 On January 19, the Oberlin College Choir and Oberlin Orchestra will share the iconic stage of Carnegie Hall’s Stern Auditorium in New York for performances of works by Tarik O’Regan, Igor Stravinsky, Elizabeth Ogonek, and Claude Debussy led by Gregory Ristow and Raphael Jiménez. That event will be previewed in a free concert in the College’s Finney Chapel on Wednesday, January 16 at 7:30 pm.

Ristow’s choir will be spending most of this month — during Oberlin’s Winter Term, when classes give way to special projects — rehearsing for the New York engagement, but also revisiting a particularly challenging set of pieces they already presented on campus during the fall semester.

He’ll take faculty cellist Darrett Adkins, the Choir, and Sofia Gubaidulina’s Canticle of the Sun to the Cleveland Cello Society’s annual “i Cellisti” extravaganza at St. Paul’s Church in Cleveland Heights on Friday, January 11 at 7:30 pm. And he and his singers will repeat a program they gave for the Oberlin Board of Trustees on the FIRST•Music series at First Lutheran Church in Lorain on Sunday, January 13 at 3:00 pm.

“The singers dove in with full force and full energy this fall,” Ristow said in a telephone conversation. “We began with performances of Igor Stravinsky’s Les noces and the Gubaidulina. There was only a short time period for us to get that ready, but the Choir fell in love with both of those pieces, and took to them beautifully.”

Then the Choir joined the Oberlin Musical Union and Chamber Orchestra for Ralph Vaughan Williams’ Dona nobis pacem. “Just a week later, we sang the special program for the meeting of the Trustees,” Ristow said, ticking off another challenging list of pieces that included Joseph Rheinberger’s Abendlied, Herbert Howells’s Take Him, Earth, for Cherishing, Thomas Weelkes’ O Lord, arise, the premiere of Oberlin faculty composer Stephen Hartke’s Blessed are they that sow, and Tarik O’Regan’s Triptych.

Ristow obviously spends a great deal of time and thought in assembling his programs, pairing works to create fascinating relationships or contrasts. The Stravinsky and Gubaidulina pieces are both ritualistic, but while Les noces, scored for vocal soloists, choir, four grand pianos, and percussion, takes its inspiration from pagan Russian traditions, Canticle of the Sun, for choir, solo cello, and percussion, draws on mystical Christian sources. 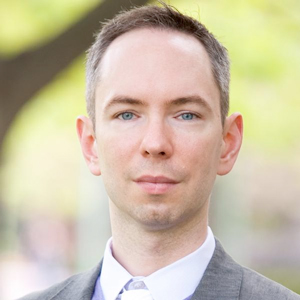 “The Stravinsky is highly rhythmic, with constantly changing meters and near-repetition of blocks — like legos, but each of them so very slightly different,” Ristow said. “At times, all four pianos play fast eighth or sixteenth notes together with xylophone. There’s not a moment when everything relaxes, and it’s stunning when it all comes together.

“The Gubaidulina is very meditative and almost exists entirely outside the realm of time. It’s unlike any other choral piece in how close it is to the act of meditating and praying. It invites the listener into what feels like a very sacred space.”

Ristow’s program for the Trustees made more connections than contrasts, pairing, for example, Richard Rodney Bennett’s A Good Night — written for the funeral of Linda McCartney — with Rheinberger’s Abendlied, and Weelkes’ motet — festooned with the wince-inspiring note clashes that English Renaissance composers loved — with Hartke’s piece that uses those harmonic quirks as a jumping-off point.

“It’s great to come back to fine music,” Ristow said. “It’s like a wine that gets better on the shelf. Having sat in our heads for a couple of months, the performances have matured in a very lovely way. This is the first time I’ve recycled music at Oberlin, partly because when we perform at Carnegie we want to give the very best performances of these pieces that we can. But I think it’s also a great pedagogical experience for me and for our student musicians as well. It’s something I hope they’ll experience with a lot of the standard repertoire throughout their lives — discovering when they come back to an opera or a song cycle again, that with a bit more experience in life and in music, there are so many other things there they didn’t notice the first time around.”

And repeating a piece can make some things easier the second time around. “The main challenge for the choir and soloists in the Stravinsky is a lot of Russian text — a good twelve pages’ worth,” Ristow said. “We’re working toward memorizing it for Carnegie Hall.”

Besides the obvious cachet of performing at such a temple of music, Ristow believes that preparing for the Carnegie Hall concert will bear important pedagogical fruit. “This is a way of teaching them how to move from ‘I’ve never seen this music before’ to ‘I’m performing this at a really high level.’ Carnegie Hall gives us a chance to follow through on that process. In a professional situation, you’re typically expected to put on a concert with about a week of rehearsals — and that’s if you’re lucky,” he said.

Rehearsing during Winter Term has its own rewards. “There’s something really wonderful about having a focused time just to work toward a performance,” Ristow said. “The opportunity to spend four to five hours a day of rehearsal and preparation with no classes or distractions allows us to start to think and breathe together as one musical unit, and form musical relationships that will last for a lifetime.”

END_OF_DOCUMENT_TOKEN_TO_BE_REPLACED

The strings-only work by Berg has made relatively frequent appearances on the Orchestra’s programs. In 2021, the musicians recorded it for the In Focus series, and it appeared again on last year’s European tour. Friday’s rendition maintained the group’s characteristic light and effortless playing, each section blending as much as possible to echo the work’s original form as a string quartet. At fifteen minutes total, the piece is quite short, but the dense encoded musical meanings require some extra-attentive listening. Splitting up the three movements ensured that each one could be appreciated on its own. END_OF_DOCUMENT_TOKEN_TO_BE_REPLACED