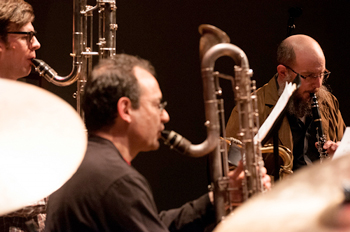 The BOP STOP stage was covered Sunday night — with instrument stands and cases, clarinets and saxophones large and little, and at least one broken reed — for The Renga Ensemble’s first visit to Cleveland. Having just released The Room Is last week, the sextet, formed by Chicago-based composer and clarinetist James Falzone, showed off their reed feast of a debut album, as well as a few extra tunes.

They opened with the title work, “The Room Is,” a feud between families of instruments: the clarinets’ layering of whispy tones is cut off abruptly by the saxophones. Falzone (Eb clarinet) and Ken Vandermark (baritone sax) seemed to be the generals, making hand signals to their forces.

Soon the music moves into the wild and the herky-jerky. Jason Stein (bass clarinet) and Ned Rothenberg (Bb clarinet) added spice with sugar-rush tonguing. Long-tone territory seemed to bring peace — until another intrusion by the saxes. Rude.

Next was “Grace and Chants,” a new piece Falzone wrote specifically for the tour. Screaming clarinets and groovy saxophones married onstage like the couple you wouldn’t expect. The language moved into hoarse, breathy sounds, then into epic territory, incorporating the hymn “What Wondrous Love Is This” in moving fashion.

Though The Renga Ensemble is inspired by Falzone’s love of haiku, you might not guess it from some of the muscular music that was on display. In “White,” the duet between Stein (bass clarinet) and guest member Dave Rempis (baritone saxophone) might be more accurately called a boxing match. Large in stature, and with instruments to match, the two men simply thrashed, musically tearing each other to bits. I wanted to know who won.

During much of that visceral tune, you could blow your nose as you please, but not in the gentle follow-up work, “Not Seeing.” It opened with Rothenberg on shakuhachi, his playing full of beautiful slides, tapers, and harmonic jumps, the instrument seeming to poke its head out and look around in new registers. It was a fresh sound that also somehow fit the earthiness of The Renga.

For second-half openers on the tour, Falzone explained that the group has been rotating solo works. Tonight it was bass clarinetist Jason Stein’s turn. He showed off both powerful and smoky playing, as well as some adept extended techniques. In one moment, different sounds came from his lips than from the instrument — one a little breeze passing through the other.

An improvised piece stunned in particular moments, like Rothenberg’s whispery shakuhachi ending, but overall it felt a little stuck. The group’s high gear — fortissimo, fingers whirring through wild, weaving runs — was impressive, but you wished they hadn’t shifted up to it so soon.

For The Renga, Falzone reworked “Alone at the Brain,” an older piece he said had been inspired by solitary time spent at a bar. The description was fitting for the solo-heavy work. Rothenberg gave a haunting turn at the wheel on bass clarinet; Rempis roared through bari sax multiphonics, grinding with almost electronic distortion; Keefe Jackson made the hulking contrabass clarinet sputter and rattle like a lonely engine; Falzone’s circular gestures seethed like snakes; and Vandermark’s percussive tongue sounds — keeping the beat between trills and guffaws — made you lean in all the way to the end.