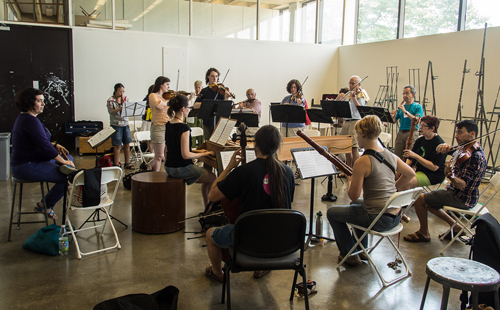 If you worry about the future of serious music in America – as many of us do – you might try attending one of the dozens of summer festivals around the country. If you like listening to great music in a relaxed setting – and especially if you enjoy playing it as well — you may find your worries lifted and your ears delighted.

I just returned from a week at the Amherst Early Music Festival at Connecticut College, where a couple of hundred participants met to play across the vast range of early music, from 13th-century chant to 18th-century opera. On this tree-lined campus perched above Long Island Sound, we performed for each other and for our teachers, surviving the anxieties of the stage and enjoying the applause of our colleagues. 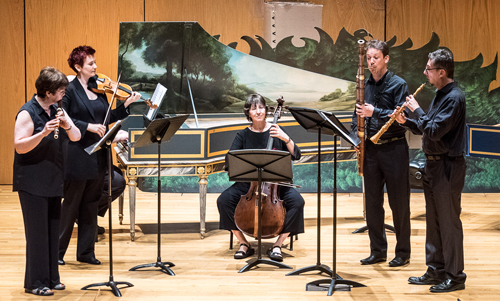 At summer festivals, you can often find the very best playing in the nation: take as just one example, Marlboro Music. On a tiny Vermont campus, masterful musicians such as pianist Mitsuko Uchida and Cleveland principal hornist Richard King play Mozart and Brahms alongside rising stars like cellist Gabriel Cabezas, recently acclaimed at ChamberFest Cleveland. That festival, too, is now part of the constellation of major summer music events, fully covered in recent issues of ClevelandClassical.

Festivals of high quality are thriving around the country, often in locales that attract vacationers: the Berkshires, Santa Fe, and Aspen. At Tanglewood and Blossom and dozens of other such vacation festivals, summertime ways replace the often stuffy atmosphere of regular concert-hall presentations: you can wear your shorts, have an ice-cream cone at intermission, and meet the artists at the beach the next day.

It makes a difference, both in the playing and the listening. A relaxed audience is ready to open up to the music; relaxed players are happy to listen to each other and free to try out new interpretations.

Orchestral and choral music, opera, and chamber music share a richer future in the festival atmosphere. Coming away from the Blossom lawn on a summer evening, it’s easy to believe that the combined energy of artists and listeners will continue to interpret old favorites and foster ongoing musical creativity.

When the listeners are also participants, the convergence is even more productive. As well as the many all-professional events, there are a number of festivals and workshops at which students of all ages both listen and play. These festivals are often focused on a particular genre: for example, classical string quartets at Chamber Music by the Sea in Portland, Maine, or the long-standing Berkshire Choral Festival near Tanglewood, or the recent lute festival in Cleveland. 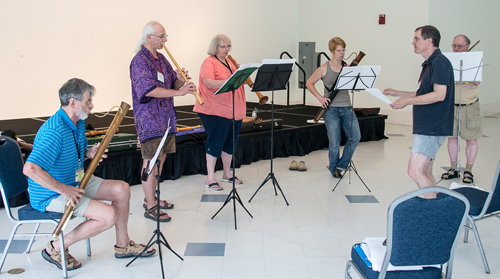 Amateurs, semi-professional, and full-time concert artists eat, live, and play together for days on end: what better way to develop ongoing audiences and to ensure the livelihood of those who make music?

At Amherst, in up to four groups a day, we students sang and played our hearts out. Recorder, harpsichord, gamba, baroque violin, and dulcian were a few of the astounding variety of shapes, techniques, and sounds that startled and delighted our collective ears.

The faculty included some of the most prominent names in early music: groups such as the women’s vocal quartet Anonymous 4 and the Flanders Recorder Quartet, as well as individual masters of the complex and vast field of early music – just one example is the elegant Baroque soprano Julianne Baird.

Hearing their varied and energetic programs, one could imagine that each of the faculty had brought a suitcase full of favorite pieces – and we all were the beneficiaries of their enthusiasm and skill. One moment we’d hear a lilting, courtly sonata for recorder and violin by Boismortier; and then, perhaps immediately afterward, Josquin’s profound memorial to his teacher, Ockeghem. A production of Rameau’s Les Indes Galantes (worked up in a single week!) featured some astounding playing and singing, almost entirely by students at the festival. When I hear a professional performance of, say, a chaconne by Lully when that morning I myself have been learning how to play a similar piece, I listen with new appreciation and joy. Attending a concert becomes in itself an act of participation, not mere passivity. 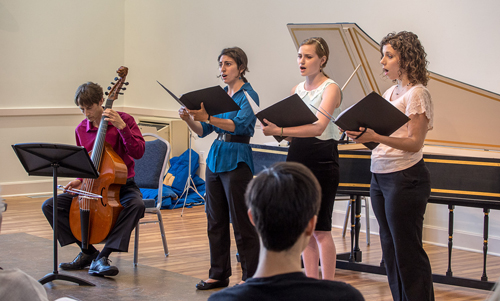 Participants ranged from high-school recorder players through master’s-level singers and string players, and even to amateurs of a “certain age” like myself. Some of those young musicians will certainly be the names you see on professional concert and opera programs in the near future.

Blessedly, you’ll never hear some of the rest of us on the professional concert stage — but we will be the audiences, and that’s a good thing for music.

Jackson began the program with a recitation of Langston Hughes’ poem “Helen Keller” — the first of five poems by Hughes that served as interludes between each piece on the first half. END_OF_DOCUMENT_TOKEN_TO_BE_REPLACED

Pianos with pins and tape on strings, a bass drum and tam tam, crotales, Almglocken, and vibes. Microphones were hooked up all around the instruments. The feed was sent to speakers around the room. Lighting designer Nicholas Houfek hung incandescent globes over the arrangement of instruments from thin black wires stretching across the beams. END_OF_DOCUMENT_TOKEN_TO_BE_REPLACED

From the podium, Elim Chan set an ambitious tone for the evening. The rising star conductor, here in her Cleveland Orchestra debut, has a commanding style, and every twist and turn in Saturday’s performance tracked closely with her baton. END_OF_DOCUMENT_TOKEN_TO_BE_REPLACED