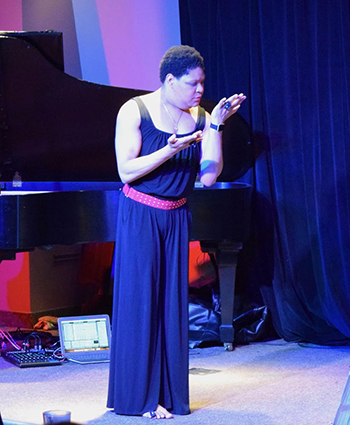 The first annual Re:Sound New Music Festival closed its four-day run on Sunday evening, June 10, at Bop Stop at The Music Settlement on Detroit Road in Cleveland’s Hingetown area. The four acts presented were more experimental than the opening concert that I heard on Thursday evening, and with the exception of one of the acts, not as consistently interesting and successful.

Pianist James Iman played two solo works. Stand Still Here (2012) by Jenny Beck was in several short movements, inspired by Virginia Woolf’s 1927 novel To the Lighthouse, with its themes of loss and the passing of time. The prevailing dynamic was quiet with single notes sometimes alternating with simple chords, akin to Arvo Pärt’s intense simplicity. The mood was one of desolation.

The Ocean Was Still (2013) by Jonghee Kang also employed sparse, single-note texture, with an occasional ornamental embellishment. The treble range of the piano predominated at first, but as the piece developed and became loud, there was gradual thickening of the texture. The music was constructed with pointillistic specks of sound.

Tenor saxophonist Justin Massy played 9 Rhymes (2017) by Jacob Sachs-Mishalanie, which also included pre-recorded saxophone, sine waves, and live and electronically altered real time performance, including spatially displaced speakers. There were nine movements, some only about a minute in length, that explored the timbre of the saxophone, often at the extreme high range of the instrument.

The third set, for piano, movement, and interactive electronics, was composed and performed by Elizabeth A. Baker. Her two pieces, Command Voices (2017) and Locomotion (2008) were the most original and compelling works on this program. Command Voices refers to the inner voices that direct psychotic individuals to do and say socially unacceptable things. Baker set a number of objects (among other things, what appeared to be vibrating sex toys) on the strings of the grand piano while she depressed the damper pedal. The objects moved around by themselves, creating ethereal drones. Later, Baker played chords on the keyboard very quietly, holding the keys down to create other clouds of sound. At the end she removed the objects from the strings slowly, eventually leading to silence.

Before she performed Locomotion, Baker described the complexity of human movement, with many muscles, cartilage, and other body parts influencing the smallest movement. She attached electronic sensors to various parts of her body. The sensors, remotely attached to a synthesizer, reacted to speed of motion, location in space and time, creating musical sounds as Baker performed what she called “an adagio.” Movements were slow and measured. There was a tall step ladder that became the focus of part of the dance, but Baker also occupied the stage floor, with precisely controlled movements. There did not seem to be a precise, visible/aural correlation to her movements. Sometimes there was a delay in production of the sounds, and different spatial relationships seemed to create different noises. Although the use of electronic sensors in dance is not uncommon, this performance was beautiful, both musically and visually — the highlight of the show.

The closing act on the Festival was an improvisation by the Cleveland band Togishi — Dan Wenninger, tenor saxophone and hulusi, a Chinese free reed wind instrument; Camen Castaldi, drum set; and Mike Spoke, guitar. It was brutal. After a calm introduction with Wennninger on the hulusi, the performers launched into a twenty-minute assault, each playing his own thing, at OSHA-violation decibel levels.

Although there did seem to be several discernible sections, and the three performers are clearly expert, nothing in the structure could be related to either traditional jazz (or classical) improvisation. Some audience members left because of the volume, while some, with greater foresight, inserted earplugs. The rest of us used our fingers. At the end, the three performers were drenched in sweat from their workout. Although other listeners may have been able to discern this performance’s artistic merits from chaos, I was not able to do so. It was an experiment that did not succeed.

Photo of Elizabeth A. Baker by Sophie Benn.

The cimbalom was the feature of the show, an instrument capable of taking on many personas. Its performer, Chester Englander, has shaped his career around the instrument, and has inspired composers to write more repertoire for it, some of which was presented on the program. END_OF_DOCUMENT_TOKEN_TO_BE_REPLACED

You wouldn’t expect that acoustic from a glance at the nave, which is wide and long, but not especially lofty. But when I guest conducted a local amateur choir and professional orchestra in Beethoven’s Mass in C there a few years back, during the first rehearsal we released the final chord of the “Gloria” and listened in astonishment for the next several seconds. The sound continued to roll down the space like the big wave that surfers dream about. END_OF_DOCUMENT_TOKEN_TO_BE_REPLACED