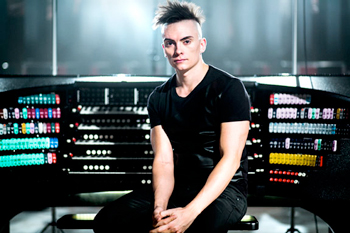 The brilliant and iconoclastic organist Cameron Carpenter performed at E.J. Thomas Hall in Akron on Friday evening. It was his first local concert using his self-designed digital instrument known as the International Touring Organ, built by Marshall and Ogletree of Needham, Massachusetts. The builders digitally sampled and stored sounds from a variety of pipe organs that are then reproduced on an array of speakers. At E.J. Thomas Hall, the speakers occupied most of the stage.

The console has five keyboards (manuals) and a pedal keyboard with extensions at either end, both lower and higher, beyond the range of a standard pedal compass. A dizzying array of tabs and buttons controlling the sounds of the instrument surrounds the keyboards. There are some who object to the use of the term “organ” to describe an instrument lacking physical pipes, but for the purposes of this article, I will refer to this instrument as an “organ.” With a couple of reservations, organ and performer were a stunningly successful match.

Cameron Carpenter is controversial in his use of non-traditional playing styles, although he certainly is aware of them and could use them if he wanted. He has been quite outspoken in his disdain of the organ being “locked away” in churches and concert halls, and has said that the limited resources of most pipe organs restrain his artistic vision. Although Carpenter rejects the suggestion that he is on a crusade to bring organ to the masses (he says that “playing the organ is not a military mission”), he is interested in reviving interest in the organ as a medium for large-scale popular enjoyment and entertainment, unlocking it from its sacred and academic past.

For Carpenter an organ concert should also be visual. The organ console was front and center, with a large video screen suspended above him. Stage lighting changed depending on the mood of the piece. There was no printed list of the program selections; Carpenter announced his program from the stage. Between selections he spoke, an odd mixture of the polemical, egotistic, and self-deprecatory. Several times he described himself as “a nerd.”

If you accept Cameron Carpenter on his own terms — and why shouldn’t you — he is a brilliant and compelling musician. His concert crossed many genre boundaries, including classical, popular, jazz and theatre organ styles. Sometimes he bent genres within a single work. He has seemingly unlimited technique. He can “solo out” musical lines on multiple manuals at the same time, play chords in his feet, and manage a kaleidoscopic and ever-changing range of sounds on the organ. The International Touring Organ is the only instrument that could carry out his artistic aims

The program began very softly, with a slow, jazzy arrangement of Henry Mancini’s “Whistling Away the Dark,” showing the softest sounds of the organ, and using unusually alluring solo sounds for the tune. From there Carpenter launched immediately into a transcription of Shostakovich’s Festive Overture, op. 96. The overture opens with trumpet fanfares. If you were sitting in close proximity to the speakers assigned to the loud reed stops, they were earsplitting. Those loud reed timbres also sounded unreal, neither like real trumpets, nor like trumpet stops on a pipe organ. I suspect that the ITO sounded different in various spots in the hall. From my seat, it was at rock concert volume when at full tilt. Thomas Hall had been reduced in size by lowering the ceiling to hide the balcony, so the remaining room was uncomfortably small for some of the masses of sound. 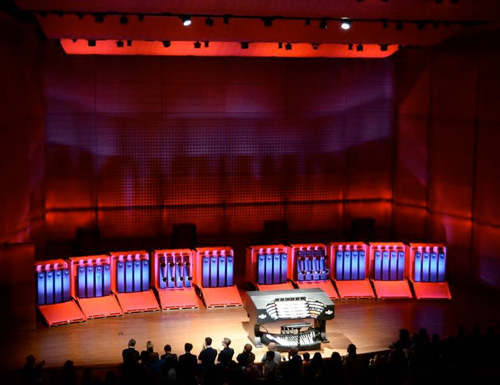 J.S. Bach’s Prelude and Fugue in A Minor, BWV 543, followed, in Carpenter’s floridly orchestrated transcription. In the opening exposition of the fugue he “soloed out” the three fugal voices in the hands, each on separate manuals. There were extremes of volume and tempo with rubato galore, as well as freely improvised ornamentation throughout. It might not have pleased traditionalists, but it was fun, as was a sensuous arrangement of Isaac Albeniz’s “Evocation” from Iberia, originally for piano. Aside from one brief climax, it was soft, undulating mysteriously.

To close the first half of the program, Carpenter played his own “Music for an Imaginary Film,” composed especially for the International Touring Organ. It is a virtuosic homage to 1920s theatre organs, uniquely American instruments designed to accompany silent films. Carpenter’s piece was insanely complicated, mixing style upon style and constantly shifting emotions. Like some works composed by other great virtuosi, it is difficult to imagine others performing it.

Bernstein’s overture to Candide opened the second half with delightful clarity and charm. Then Carpenter announced that he would play Bach’s Toccata in F-sharp Major, BWV 540, which was met with giggles from those who caught the inside joke: Bach wrote the piece in F major. Carpenter transposed it up a half-step to F-sharp major. No reason was given. The toccata began very softly with a subtle crescendo to volcanic proportions before a big pedal solo. Suddenly, it was soft again before another big crescendo. Despite the gimmick of the key change, this was Carpenter’s most straightforward playing of the evening.

The ITO’s theatre organ sounds were fully displayed in an elaborate medley of tunes by George Gershwin, including “Embraceable You,” “S’Wonderful,” “Swanee,” and “Our Love Is Here to Stay.”

The concert closed with Carpenter’s transcription of Scriabin’s Piano Sonata No. 4, a work with the utmost technical challenges that demanded all the resources of the organ. There were portions of this work that simply could not be performed on a typical pipe organ. Carpenter’s bravura performance made a strong case for his own artistic vision and instrument. The concert was mostly enjoyable, and Cameron Carpenter is bringing unusual and sometimes challenging music to audiences who would not otherwise hear it.

There were two brief encores: “Pure Imagination” by Leslie Bricusse and “The Easy Winners,” a rag by Scott Joplin.

The cimbalom was the feature of the show, an instrument capable of taking on many personas. Its performer, Chester Englander, has shaped his career around the instrument, and has inspired composers to write more repertoire for it, some of which was presented on the program. END_OF_DOCUMENT_TOKEN_TO_BE_REPLACED

You wouldn’t expect that acoustic from a glance at the nave, which is wide and long, but not especially lofty. But when I guest conducted a local amateur choir and professional orchestra in Beethoven’s Mass in C there a few years back, during the first rehearsal we released the final chord of the “Gloria” and listened in astonishment for the next several seconds. The sound continued to roll down the space like the big wave that surfers dream about. END_OF_DOCUMENT_TOKEN_TO_BE_REPLACED