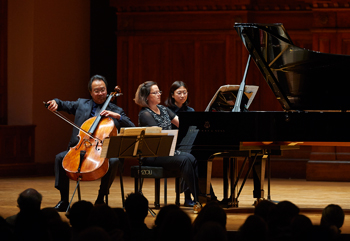 Not only did international superstar cellist Yo-Yo Ma sell out Finney Chapel for his appearance on the Oberlin Artist Recital Series Wednesday evening, he packed them into Warner Concert Hall as well, where an overflow crowd witnessed his masterful recital via simulcast.

Ma, who last appeared at Oberlin before its current students were born*, put together an unusual but engaging program that reflected some of his wide-ranging musical tastes. He also managed to serve up dessert before the main course — who doesn’t like that to happen once in a while — and only one item on his playlist was originally written for the cello. I heard the recital in Finney Chapel.

The Stravinsky suite is one of two recycled by the composer from his neo-Baroque score for Diaghilev’s ballet, Pulcinella, the cello and piano version having been produced under the watchful eye of Gregor Piatigorski. Ma and Stott played it with scintillating charm, applying a wide range of nuances with astonishing single-mindedness.

Though the Villa-Lobos, Piazzolla and de Falla weren’t originally meant to go together, Ma and Stott melded them into a seamless narrative, going straight to the soul of Brazil, finding the dark, sensual moodiness of tango, and delving into the African roots of Brazil’s indigenous music. In the de Falla, they conjured up a catalog of human emotions in infectious and evocative folksongs from the North and South poles of Spain.

The first half of the recital was wonderfully paced. Pieces and movements flowed from one to another with an ease and naturalness born out of years of experience and an uncanny ability to communicate with an audience.

That lone work on the program originally written for cello was Olivier Messiaen’s Louange à l’Éternité de Jésus from the Quartet for the End of Time. Indeed, time stopped (and breathing too) at the beginning of the second half of the recital as Yo-Yo Ma began with an impossibly soft note, then visited every level of intensity and relaxation and every degree on the dynamic scale as the piece progressed. On the long, final note, his bow changes were sonically invisible, then silence prevailed for a very long moment.

Ma and Stott ended the recital with yet another work repurposed for the cello, Brahms’s compact third violin sonata, which they played with lean clarity and powerful intensity. The gorgeous slow movement provided an alluring respite.

This outstanding performance (validated by foot stomping from students in the gallery) cried out for encores, and Ma and Stott obliged with three. First came Edward Elgar’s Salut d’Amour, shoo-in title music for an Edwardian-era TV series. Then Mariano’s rhythmically energized Cristal from Ma’s album, Obrigado Brazil. Then, how does a cellist say goodbye except with Saint-Saéns’s The Swan?

Earlier on Wednesday evening, Yo-Yo Ma graciously met students in Warner Concert Hall for a question and answer session moderated by the conservatory’s acting dean, Andrea Kalyn. Many of the queries were deeply philosophical (after a couple of those, Ma quipped to Jamey Haddad, Oberlin Professor of Advanced Improvisation and Percussion and his frequent world music collaborator, “Jamey, you told me this was going to be easy!”)

Though the cellist may understandably have strayed from giving pithy, direct answers, the questions became springboards for wide-ranging thoughts about music and society that revealed Yo-Yo Ma’s deep, warm soul as well as his down-to-earth humanity — qualities that infuse his life and his cello playing in equal measure.

Franz Schmidt’s Symphony No. 4 showcased the ensemble, under guest conductor Jonathan Berman, in the standard conventions of a not-so-standard piece. But at the start of the program, the musicians were equal partners to pianist Cédric Tiberghien, whose playing could be as bold as the full orchestra or as intimate as any instrumental solo. END_OF_DOCUMENT_TOKEN_TO_BE_REPLACED

END_OF_DOCUMENT_TOKEN_TO_BE_REPLACED

Jackson began the program with a recitation of Langston Hughes’ poem “Helen Keller” — the first of five poems by Hughes that served as interludes between each piece on the first half. END_OF_DOCUMENT_TOKEN_TO_BE_REPLACED

Pianos with pins and tape on strings, a bass drum and tam tam, crotales, Almglocken, and vibes. Microphones were hooked up all around the instruments. The feed was sent to speakers around the room. Lighting designer Nicholas Houfek hung incandescent globes over the arrangement of instruments from thin black wires stretching across the beams. END_OF_DOCUMENT_TOKEN_TO_BE_REPLACED

From the podium, Elim Chan set an ambitious tone for the evening. The rising star conductor, here in her Cleveland Orchestra debut, has a commanding style, and every twist and turn in Saturday’s performance tracked closely with her baton. END_OF_DOCUMENT_TOKEN_TO_BE_REPLACED