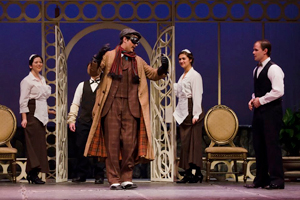 In 1792, Emperor Leopold II commissioned Domenico Cimarosa to write his opera Il matrimonio segreto on a libretto by Giovanni Bertati based on the play The Clandestine/Secret Marriage (1766) by George Colman and David Garrick. The opera was premiered in Vienna in 1792, two months after the death of Mozart. Love triangles and romantic chicanery in 18th century Italy permeate this two-act opera, which unfurls slowly in the first act and becomes more frolicsome in the second.

Its wonderfully silly plot has Paolino secretly marrying Geronimo’s daughter, Carolina. Meanwhile, the situation is complicated by Carolina’s aunt Fidalma, who loves Paolino, and by the arrival of the Englishman, Count Robinson, who, although betrothed to Geronimo’s other daughter Elisetta, falls in love with Carolina. She and Paolino plan to elope together, but are caught by the others and are forced to reveal their secret marriage. In the end, Count Robinson is willing to content himself with Elisetta, and Geronimo forgives Carolina and Paolino. It was a typical 18th century bit of contrived silliness popular with the aristocracy of the era.

Kevin Simmons’ Paolino (accountant to Mr. Geronimo) was portrayed with pleasant straightforwardness. Never over-singing, his characterization was well prepared and appropriate throughout.

Bethany Grace Mamola’s Carolina (younger daughter of Mr. Geronimo) was a delight to hear and see. Her casual yet precise stage demeanor and astute vocal talent made for a wonderfully clear vocal interpretation that rang throughout the hall.

Daniel Grambo as Mr. W.S. Geronimo (wealthy financier) sang with an open throated, resonant voice with brilliant resonance in his middle register. His command of the stage was notable even when his mustache fell off — and mysteriously reappeared on his next entrance.

Alexandra Schiano’s Elisetta (oldest daughter of Mr. Geronimo) was the vocal highlight of the performance. Her depth of maturity on the stage was very strong and she sang with an authoritative vocal presence filled with both nuance and bravura. This is a voice brimming with confidence yet flexible and tender as needed.

Michelle Lajeunesse’s Fidalma was graceful yet poignant. She sang with a velvet tonal quality that still projected well. Her best range is in her mid- to upper register and she was careful to utilize her vocal strengths appropriately without pushing.

Armando Contreras’s Count Robinson was portrayed with just the proper amount of pompous authority and his singing was notable.

This was a performance devoid of exaggeration yet overflowing with solid, unforgettable comedic moments in the second act. Bamberger’s frugal staging allowed Davidson, the CIM orchestra and singers to perform with confidence, finesse and clarity while having a great deal of fun in the process. And, as usual with Bamberger, there were no vocal lines delivered upstage.

Kudos to the (uncredited) harpsichordist who played with such stylistic finesse during the many recitatives.

To say that the music of Bernard Rands is tinged with Ravel and Debussy doesn’t tell the whole story. In reality, his music extends beyond that into a post-modern, impressionistic world. On the recently-released CD, Rands at Oberlin, the composer’s engaging musical voice is brought to life in stellar performances by Robert Walters of the Concerto for English Horn and Orchestra (2015) and by tenor Magnus Staveland of the Pulitzer prize-winning Canti del Sole (1983). END_OF_DOCUMENT_TOKEN_TO_BE_REPLACED

END_OF_DOCUMENT_TOKEN_TO_BE_REPLACED

Composer John Harbison has done it all. His numerous awards include a MacArthur Fellowship and a Pulitzer Prize. He has written works for many of America’s leading musical organizations and has served as composer in residence with the Pittsburgh Symphony and the Los Angeles Philharmonic. His catalogue includes three operas, seven symphonies, twelve concerti, a ballet, six string quartets, numerous chamber works, and a large body of sacred music. On her latest CD, Late Air — Music by John Harbison, soprano and Oberlin voice professor Kendra Colton reminds us that the celebrated composer has a special talent for writing art songs — she also proves herself to be a sensitive interpreter of them. END_OF_DOCUMENT_TOKEN_TO_BE_REPLACED