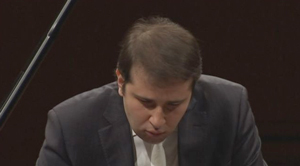 It’s one thing to win a major international piano competition by a pleasing a panel of jurors, and quite another to go on to make a successful career by enthralling audiences with your playing. Stanislav Khristenko, who took first place in the Cleveland International Piano Competition in 2013, left no doubt in his Carnegie Hall preview recital on Sunday evening, May 11 in CIM’s Kulas Hall that he has all the right stuff to thrive on the international concert circuit.

On Sunday evening, Khristenko was on a mission. While some pianists serve up little hors d’oeuvres — a few Scarlatti sonatas or some pre-prandial Haydn or Mozart just to get the digestive juices flowing — the Ukrainian-born artist plunged headlong into Béla Bartók’s Sonata before even bothering to fasten his seat belt. Rhythmically incisive and explosive with accents, his opening salvos took hold of the crowd and probably nobody did much breathing until the three-movement work ended in a riotous dance.

Now that he had our complete attention, Khristenko eased up on the throttle with Alexander Zemlinsky’s opus 9 Fantasies on Poems by Richard Dehmel, lyrical, ruminative works with wonderful titles like Waldseligkeit (Forest Bliss) and Käferlied (Song of the Beetles — yes, the crawly kind). There’s a lot lurking under the surface of the poetry, though — Dehmel was also the author of Verklärte Nacht, the poem Schoenberg famously translated into music — and Khristenko ably suggested layers of ambiguity in his colorful playing.

The Adagio from Ernst Krenek’s third piano sonata reflected the recitalist’s fascination with that composer’s music (he’s recorded a CD with six of Krenek’s works including the third sonata). At first mildly dissonant, the piece grows in intensity and visits some dark psychological regions before ending with a mysteriously dismissive gesture.

Khristenko wrapped up the first half of his program with Liszt’s Rhapsodie espagnole, a quasi-improvisatory fantasy on Iberian themes, including La Folia and Jota Aragonese. Pianists frequently lose their way in Liszt’s inventive ramblings, but Khristenko kept a firm hand on the structure of the piece without sacrificing any of its virtuosic flights of fancy or ignoring its symphonic colors, which ranged from rich, robust textures to fluttery episodes at the treble end of the keyboard. For that, he got a standing ovation even before intermission.

Chopin’s Fantasy in f, op. 49 offered more interpretational challenges, but Khristenko’s fine sense of narrative and pace produced a performance that sounded both improvisatory in spirit and highly organized in structure.

The evening culminated in Prokofiev’s seventh sonata, “Stalingrad,” another vehicle Khristenko aptly used to demonstrate his mastery of form and technique. It ended in a controlled frenzy of kinetic excitement.

The crowd roared its approval and got in return a wistful little Habanera (Divertimento No. 2) by Xavier Montsalvatge studded with wry “wrong” notes. A second encore, Prokofiev’s Suggestion diabolique, brought Khristenko’s seemingly inexhaustible energy back into full play with a fiery outburst of sheer pianism. On to 881 7th Avenue, 10019!

Published on ClevelandClassical.com May 13, 2014.

END_OF_DOCUMENT_TOKEN_TO_BE_REPLACED

Then, you heard all the qualities that make for a stunning soloist. Winner of the 2013 Cleveland International Piano Competition, Khristenko was back in town this month for a recital in Piano Cleveland’s summer series, Piano Days @CLE. And he couldn’t help but revel in the spotlight a little, even as he settled into a more collaborative role at the keyboard for his program, “Stanislav and Friends.” END_OF_DOCUMENT_TOKEN_TO_BE_REPLACED