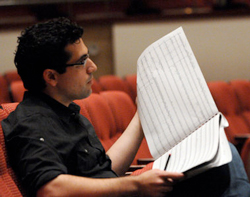 CityMusic Cleveland has started a tradition of sponsoring a week’s worth of Intergenerational Concerts at the end of its season. This year’s cycle included four morning performances (opening with a limited access concert at the Juvenile Detention Center) and two evening concerts conducted by David Alan Miller. The morning events began with Rossini’s Thieving Magpie overture and continued with Avner Dorman’s Uzu and Muzu from Kakaruzu, based on the children’s book of the same name by Ephraim Sidon, featuring percussionists Haruka Fujii and Luke Rinderknecht. The two evening performances at the Shrine Church of St. Stanislaus and St. Noel, Willoughby Hills added Schumann’s fourth symphony.

I caught the Thursday morning performance at Fairmount Temple Auditorium, which got off to a bit of a late start waiting for school buses to arrive. When everybody was in place, the audience was as intergenerational as one could expect at 10:00 am: students, their teachers and aides and a number of older attendees — people whose commitments and schedules allow them to come to a true “matinee.”

Miller was a kid-friendly emcee who greeted the young audience warmly and avoided talking down to them as he introduced the Rossini overture. CityMusic, informally attired and looking a bit crowded on the stage of the auditorium, played La gazza ladra with spirit and precision even though curtains soaked up a lot of their sound (and the dull acoustics of the hall didn’t help).

Avner Dorman (pictured above), who composed Uzu and Muzu on commission from the Stockton (CA) Symphony, was on hand to narrate his piece, which had its premiere a year ago March. Dorman discovered Sidon’s book when he was twelve and had long thought of setting it to music. He explains the point of the fable: “This is a story about feuds within families that no one remembers what they’re about, it is about quarrels within a nation, it is about prejudice against foreigners, and it is about the senselessness of war.”

Dorman decided to musically represent the two brothers from Kakaruzu, Uzu and Muzu, who fall out over the cosmic issue of how one should properly cross his legs, with two percussionists who play mallets and a whole battery of other instruments, colorfully demonstrated beforehand by Fujii and Rinderknecht. As the tale unfolded and the feud led to the building of a wall and the extension of the conflict many generations into the future, the soloists and orchestra expertly realized Dorman’s colorful musical representations of cooperation, conflict and reconciliation — and along the way simulated some humorous everyday sounds like snoring. The busy percussion soloists were outstanding.

The audience hung on every word and note of the story and score, which was a charming and evocative grab bag of musical styles and near-quotations. Only a couple of rows of very young children — probably too young to be engaged by this rather sophisticated tale and score — babbled among themselves throughout the piece.

CityMusic’s Executive Director Eugenia Strauss, clipboard in hand, turned into a bus dispatcher at the end of the hour-long program. Running an orchestra can be a complicated enterprise!

END_OF_DOCUMENT_TOKEN_TO_BE_REPLACED

Rodgers & Hammerstein’s Cinderella was originally produced for television in 1957 — seven years after the animated Disney film was released — and starred Julie Andrews. According to the Rodgers & Hammerstein website, it was viewed by over 100 million people. END_OF_DOCUMENT_TOKEN_TO_BE_REPLACED

The story line has its origin in an 1855 play and an 1842 farce that Thornton Wilder mined for his 1938 play The Merchant of Yonkers. When that turned out to be a flop, in 1954 Wilder made the crucial decision to re-center the show around the character of the legendary marriage broker Dolly Gallagher Levi and renamed it The Matchmaker. END_OF_DOCUMENT_TOKEN_TO_BE_REPLACED

The Dodero Center for the Performing Arts at the Gilmore Academy in Gates Mills is one feature of an impressive campus. The auditorium is shallow, the stage is deep, and the ensemble played without a shell. Throughout the program, the sound, especially in instruments’ lower registers, tended to disappear. END_OF_DOCUMENT_TOKEN_TO_BE_REPLACED