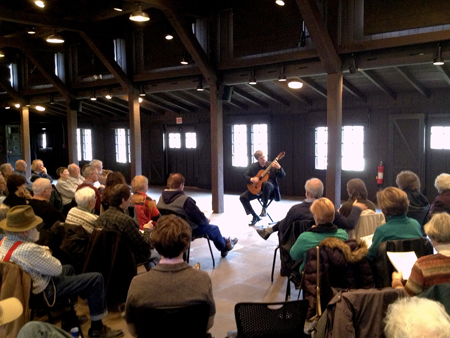 A classical guitar concert of mostly Russian music held on St. Patrick’s Day in a rustic lodge in a national park —with stuffed bison heads staring down at you! Disconnects sometimes make for really successful concerts, as they did last Sunday when guitarist Gideon Whitehead performed at Happy Days Lodge in Cuyahoga Valley National Park under the joint auspices of Music by Nature and the Cleveland Classical Guitar Society.

Whitehead, a Michigander who studied at CIM and is now pursuing an artist diploma at the Curtis Institute with Jason Vieux and David Starobin, appeared as part of CCGS’s Local Artists and Rising Stars Series.

Weiss earned his honorary Russian status through a student who became lutenist at the Moscow court, where the manuscript of the partita is preserved. During its five short movements, Whitehead demonstrated his ability to bring out subtle inner details and achieve a variety of voicings over a wide dynamic range. His folksy approach to the Paysane and Polonaise and his frisky reading of the Gigue were high points.

Rudnev’s variations were voluble, nicely layered and moody. At one point, Whitehead simulated a balalaika to excellent effect. Korchmar’s five-movement celebration of the famous White Nights of St. Petersburg — based on a Pushkin poem — was by turns jazzy, sentimental and virtuosic. Whitehead kept the perpetual motion of the Scherzo of Shades Infernal going at a fine clip and played the busy, ascending lines of Hymn to the Rising Sun masterfully, ending with rich chords which faded into silence.

In the second half, Whitehead brought out all the wit and humor of Lansky’s suite: the tunefulness and capriciousness of its Aimless Air, the jazzy syncopations of its Crooked Courante, the ironic innocence of its Shameless Sarabande, the unruly gangliness of its Awkward Allemande, and the sweet restraint of its Partly Pavane.

He was equally successful in conveying the eventful narrative of Koshkin’s Usher Waltz, a crazed distillation of Poe’s dark story, The Fall of the House of Usher, and the contrasts between the religious and secular worlds depicted in Mangoré’s La Catedral.

Between pieces, Whitehead gave short, chatty comments about the pieces which fit in well with the informal atmosphere of the setting. Keep your ears out for future opportunities to hear this “rising star.”

This was a fine collaboration between two organizations that know how to present enjoyable concerts on their own and can find occasions to do that together as well. Music by Nature has a tradition of offering wine, soft drinks and nibbles before the concerts and during intermission — a nice touch that also encourages the audience to mingle.

END_OF_DOCUMENT_TOKEN_TO_BE_REPLACED

Supported by engagingly, yet simple staging by Cara Consilvio, a well-prepared cast of singers told the archetypal story of Cinderella with charm and flair. Framing the production was  a sparse but colorful set and wonderful lighting by Dave Brooks. END_OF_DOCUMENT_TOKEN_TO_BE_REPLACED