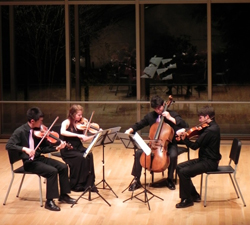 For the second year in a row, the Cleveland Chamber Music Society has honored the Omer Quartet with a Young Artists Showcase concert at First Unitarian Church in Shaker Heights. Violinists Mason Yu and Erica Tursi, violist Joe LoCicero and cellist Alex Cox, all graduating seniors at the Cleveland Institute of Music (pictured here in Mixon Hall), where they have participated in CIM’s Intensive String Quartet Seminar, have spent the season playing outreach concerts in elementary schools with coaching from Annie Fullard of the Cavani Quartet and Peter Salaff of CIM. The Omer Quartet entertained a mid-sized and slightly older audience on Sunday evening, May 5, with two unconventional works by Leoš Janáček and Felix Mendelssohn.

A year ago, the Omer played Mendelssohn’s last-composed chamber work for the occasion; this time they went back to the beginning and offered the 18-year-old composer’s first work for string quartet, op. 13 in a minor. Taking his own song, Ist es Wahr? as its underlying motto, Mendelssohn crafted a beguiling piece with a broadly expressive second-movement Adagio and a charming Intermezzo in place of a Scherzo. Four fine players with their own individual voices, the Omer proved in the Mendelssohn that they could also sublimate their personalities into a lean and resonant ensemble. The final Presto (ending with an Adagio) was energetic and almost brazen at times, featuring an extroverted cadenza by Mason Yu.

The evening began with Janáček’s Quartet No. 1, “Inspired by Tolstoy’s ‘Kreutzer Sonata’, a nearly-pulp fiction tale of adultery, jealousy and murder that motivated the Czech composer to paint a vivid psychological scenario. Beginning with a nervous motive in the cello picked up by the other players in turn, the quartet’s musical texture was frequently interrupted by what can only be described as individual psychotic episodes. A few rough technical passages aside, the Omer gave a committed and vivid reading of a highly-charged piece. (In her follow-up remarks about the Janáček, Annie Fullard inadvertently but descriptively coined the phrase “Post-Romantic Stress Syndrome”, which seemed perfectly apt!)

It was announced at this concert that the Omer Quartet would soon be participating in the 2013 Fischoff National Chamber Music Competition at the University of Notre Dame in South Bend, IN. Exactly one week later, the group was awarded not only the Grand Prize of $7,500 but also the Gold Medal ($3,500) in the Senior String Division, honors which include a Winner’s Tour of the Midwest USA in the fall and concerts at Italy’s Emilia Romagna Festival in 2014.

That news would have pleased the late Cleveland Orchestra violinist Gino V. Raffaelli, who revived and championed the outreach programs of the Cleveland Chamber Music Society which have brought live chamber music to more than ten thousand elementary school students during the last seven years.

Published on ClevelandClassical.com May 14, 2013

Northeast Ohio’s Les Délices has long been that rarest of beasts: a world-class organization so proud of its region (ours) and repertoire (distinct niches in pre-1800 music) that it never tries to be everything to everyone, paradoxically making a strong case for a broad, curious international following. In the December episode of its SalonEra series, the ensemble embraces its strengths and community to marvelous effect. END_OF_DOCUMENT_TOKEN_TO_BE_REPLACED

END_OF_DOCUMENT_TOKEN_TO_BE_REPLACED

Another I remember fondly is Gian Carlo Menotti’s Amahl and the Night Visitors.  Commissioned by NBC, the one act, made-for-television opera, premiered on December 24, 1951, at the network’s studios in New York’s Rockefeller Center. And now, through the wonders of technology, Cleveland Opera Theater has created a magical new production of the work which is available on demand through January 6, 2021 (Three Kings Day). END_OF_DOCUMENT_TOKEN_TO_BE_REPLACED

Jessen has now followed up with her second solo CD, Winter Chapel. Recorded on January 17, 2020 in Oberlin College’s Fairchild Chapel and available on Carrier Records, the album is a continuum in Jessen’s journey to push the musical boundaries of her instrument and herself as an improviser. END_OF_DOCUMENT_TOKEN_TO_BE_REPLACED