Mitsuko Uchida is in the course of revisiting selected Mozart concertos after completing a whole cycle of those ravishing pieces with The Cleveland Orchestra at Severance Hall from 2002-2007. On Thursday, April 3 she reprised No. 18 in B-flat and No. 19 in F. Between the two, the Orchestra offered Mozart’s early “Symphony” No. 23. The entire concert, including intermission, lasted about 90 minutes.

As Mozart did when he played the solo part, Uchida led the performance from the keyboard, in this case facing upstage at the lidless Steinway. Her graceful, flowing hand gestures served as manual choreography, shaping the music rather than keeping things together — not much of an issue with The Cleveland Orchestra, who are famously alert and responsive to each other.

The soloist’s bio in the program book notes that “Mitsuko Uchida is a performer who brings deep insight into the music she plays through her own search for truth and beauty.” That Apollonian approach to interpretation results in lovely, balanced, fluent and quite flawless performances, as the near-capacity audience who turned out for her latest appearance would surely agree. What one sometimes misses in the perfection of her Mozart are the composer’s impish gestures, which seem to get politely ignored like embarrassing jokes at a formal tea party.

The Symphony that ended the first half and separated the two concertos is a transitional piece between the 17-year-old Mozart’s inherited “Mannheim” style and the four-movement, fully-symphonic forms his later works grew into. A pulsing bass line harked back to baroque music. If the music wasn’t as accomplished as the composer’s later works, it still had its charms, not the least of which was the fetching second movement oboe solo, delightful in its naïveté and beautifully played by Frank Rosenwein.

Preucil led the performance from his concertmaster’s chair. The orchestra’s ensemble was both precise and flexible, requiring only a nod or two from time to time. They probably could have played it blindfolded. 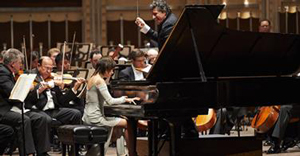 By the time she appeared on the Severance Hall stage on Friday evening, piano sensation Yuja Wang had already played Rachmaninoff’s third piano concerto twice — first on Thursday evening (left) and again on the Friday matinee, with a fourth performance scheduled for Saturday evening. That qualifies as a pianistic marathon, especially with this concerto, which the composer wrote for his first tour of the United States in 1909. It’s a beast of a piece to play, requiring solo virtuosity as well as particularly close integration with the orchestra.

Witnesses from the opening night performance reported that Wang’s playing was stunning in its brilliance, flash and dexterity. While Friday evening’s version was full of sparks and breathtaking virtuosity, Wang’s interaction with the orchestra was puzzling. She seemed tired or distracted and the ensemble was often unfocused and ragged. Conductor Giancarlo Guerrero, who went for grand, sweeping effects, seemed at something of a loss to bring clarity to the performance.

The brief Fridays @ 7 main event, which drew a near-capacity audience, began promisingly with Prokofiev’s ebullient “Classical” Symphony (No. 1). A few of Guerrero’s tempos were on the ponderous side, but the orchestra positively shone. The winds — who have a major role to play — sounded particularly fabulous. A special nod to the bassoons (Barrick Stees and Philip Austin), who provided solid support and witty commentary throughout.

Patrons who came at 6 and stayed through the afterparty were treated to a wide range of music. Before the main concert, bamboo flutist Steve Gorn and tabla player Samir Chatterjee played three hypnotic Indian classical pieces, seated on a rug on the stage of Reinberger Chamber Hall. An electronic drone box provided a soothing underlay for Gorn’s inventive improvisations and Chatterjee’s sudden bursts of rhythmic excitement.

A drum line escorted the audience into the Grand Foyer after the Rachmaninoff for Brazilian Carnival music by vocalist Kenia, pianist Klaus Mueller, drummer Adriano Santos, percussionist Marcus Santos and their backup musicians. The rhythms were infectious and the vocals were spirited. Too bad that the amplification was so hot that musical detail got lost in that very live acoustic. It would have been fun to have stayed to the end, but after a while the ears just weren’t having any more.

Photo of Yuja Wang with The Cleveland Orchestra by Roger Mastroianni.

The cimbalom was the feature of the show, an instrument capable of taking on many personas. Its performer, Chester Englander, has shaped his career around the instrument, and has inspired composers to write more repertoire for it, some of which was presented on the program. END_OF_DOCUMENT_TOKEN_TO_BE_REPLACED

You wouldn’t expect that acoustic from a glance at the nave, which is wide and long, but not especially lofty. But when I guest conducted a local amateur choir and professional orchestra in Beethoven’s Mass in C there a few years back, during the first rehearsal we released the final chord of the “Gloria” and listened in astonishment for the next several seconds. The sound continued to roll down the space like the big wave that surfers dream about. END_OF_DOCUMENT_TOKEN_TO_BE_REPLACED