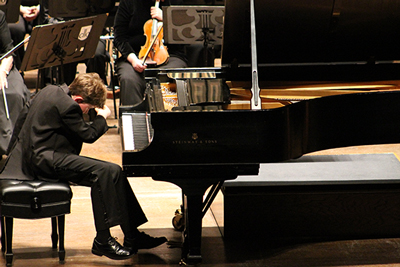 On Sunday afternoon, April 27, a large crowd gathered at Severance Hall to hear a performance by the Cleveland Women’s Orchestra under the direction of the group’s music director and conductor Robert L. Cronquist. But I am sure that, like myself, most audience members were simply not prepared for the remarkable musical event that would take place during the concert’s final work, Mendelssohn’s Piano Concerto #1 in G minor, performed by ten-year-old Gavin Michael George. Indeed, musical genius was on display as we sat mesmerized by the young pianist’s stunning performance of Mendelssohn’s vibrant concerto.

A native of Granville, Ohio and a student of Antonio Pompa-Baldi, George already possesses an impressive list of accomplishments in his resumé for someone so young. Although some may argue that the Mendelssohn is a concerto that is well suited for young players, George’s performance was memorable not because of his youth, but rather because of his maturity.

His technique was flawless – musical lines were well shaped and full of nuances. And unlike a few pianists who have come to town this year, the young Mr. George understood that he was sharing the stage with an orchestra and that a great performance could only be achieved through collaboration. And a great collaboration it was. The orchestra sounded fresh and attentive to the soloist’s subtle tempo changes. Following a rousing ovation, the audience was treated to another display of brilliance, this time with Chopin’s Etude Op. 10 No. 12 (Revolutionary). It will be interesting to follow Gavin George’s career. He is the real thing.

Robert Cronquist opened the concert with a well-paced and well-balanced performance of Wagner’s Overture to Rienzi. The strings played with a rich, full-bodied sound. The brass section was regal in tone and the march sections were spirited.

Concluding the concert’s first half was Beethoven’s Symphony #1 in C major. As with the Wagner, Cronquist lead a well-paced performance, never allowing his initial tempos to bog down, although there was a bit of push and pull during the third movement. A well-deserved brava! goes to the wind section for the many fine solos performed throughout. The violins were splendid during the opening adagio of the final movement. I always find this symphony to be so uplifting, and this performance was no exception.

The second half began with Borodin’s Polovetsian Dances from Prince Igor. Oboist Alice Mantey and English hornist Elizabeth Bishop sounded splendid during the opening dance (aka “Strangers in Paradise”). Other soloists of note included clarinetist Pam Elliot, flutist Linda Hugel Zelonis, and piccolo player Carol Dann. Robert Cronquist was in full command of tempos and drew a full-bodied and at times an appropriately muscular sound from his players.

All of the members of the Cleveland Women’s Orchestra should have gone home feeling good on Sunday afternoon. This was an enjoyable concert and our thanks for introducing us to a pianist who will hopefully be back in Cleveland many times in the future.

END_OF_DOCUMENT_TOKEN_TO_BE_REPLACED

Rodgers & Hammerstein’s Cinderella was originally produced for television in 1957 — seven years after the animated Disney film was released — and starred Julie Andrews. According to the Rodgers & Hammerstein website, it was viewed by over 100 million people. END_OF_DOCUMENT_TOKEN_TO_BE_REPLACED

The story line has its origin in an 1855 play and an 1842 farce that Thornton Wilder mined for his 1938 play The Merchant of Yonkers. When that turned out to be a flop, in 1954 Wilder made the crucial decision to re-center the show around the character of the legendary marriage broker Dolly Gallagher Levi and renamed it The Matchmaker. END_OF_DOCUMENT_TOKEN_TO_BE_REPLACED

The Dodero Center for the Performing Arts at the Gilmore Academy in Gates Mills is one feature of an impressive campus. The auditorium is shallow, the stage is deep, and the ensemble played without a shell. Throughout the program, the sound, especially in instruments’ lower registers, tended to disappear. END_OF_DOCUMENT_TOKEN_TO_BE_REPLACED