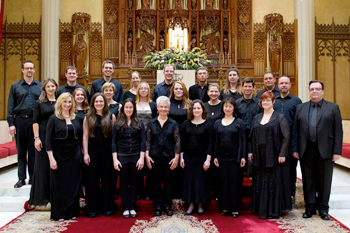 The tenors and basses of Contrapunctus sat this one out, but if these fine performances are any indication, audiences should flock to the group’s next concert. The choral sound was of the “British school,” the voices singing with clarity and without vibrato, refined and well-blended. There were just a few blips along the way in their otherwise excellent intonation.The program followed the time-honored pattern of chronological order beginning with a Gregorian antiphon in honor of the Virgin Mary, Salve regina, sung by mezzo Dawn Durdella, with a female backup singing a wordless drone supporting the vocal line. Several readings from the writings of 11th century German poetess, abbess and visionary, Hildegard of Bingen, followed, recited by Denise Larkin. Unfortunately, someone neglected to turn on her microphone, and in the spacious acoustics of the cathedral, the words were mostly lost.

Countertenor John McElliott’s powerful performance of Perotin’s Beata viscera Marie virginis (“Blessed flesh of the Virgin Mary”) flowed out of chant, freely melismatic and richly ornamented, and was again supported by a two-part drone. It was easy to imagine the contemplative effect this music might have had on medieval listeners.

The highlight of the early part of Contrapunctus’s program was their performance of one of the earliest examples of an infinite canon, Sumer is icumin in, in which four voices, one after another, sing the same music over a repeated short phrase. One of the best-known works of 13th century music, the anonymous tune has been adapted for use by others, notably by Benjamin Britten at the end of his Spring Symphony. Contrapunctus was joyous, if perhaps a bit too well-mannered.

On the second part of the program there were short works by Kapsberger and Lotti, before Contrapunctus leapt forward two centuries to 19th century Paris for a transcription for high voices and piano of Gabriel Fauré’s well-known Cantique de Jean Racine. Although the choral performance was fine, the piano was seriously out of tune and piano and choir were out of balance (pianist Buck McDaniel seemed to be holding back).

Johannes Brahms’s rarely performed setting of Ave Maria, accompanied by McDaniel on organ, fared much better, with its serene, rocking triple meter. It is definitely a composition that deserves to be better known, as do Edvard Grieg’s romantic a capella setting of the Ave maris stella and Gustav Holst’s gentle double choir setting of the Ave Maria.

Eric Whitacre, whose works seem to be ubiquitous on choral programs these days, was represented by The Seal Lullaby. It was instantly accessible, and almost as instantly forgettable. Norwegian composer Ola Gjeilo’s a capella setting of the Maundy Thursday Gregorian antiphon Ubi caritas et amor, Deus ibi est (“Where charity and love are, God is there”) was much more interesting, following the general shape of Maurice Duruflé’s setting of the same text, but not based on the Gregorian chant. It is serene and fresh, diatonic, but with a few unexpected harmonic twists to keep things interesting.

To mark the 70th anniversary of D-Day, Denise Larkin returned to read British poet Laurence Bynon’s For the Fallen, written in 1914 at the beginning of the Great War and now a staple of British Remembrance Sunday observances. Contrapunctus followed up the reading with a setting of portions of the poem by British composer Mark Blatchly. The work is suitably patriotic, accompanied here on piano (despite the indication in the program notes that the accompaniment was for organ) with a short part at the end for trumpet, which played the memorial tribute The Last Post.

The final work on the program was in some ways the highlight, a piece commissioned by Contrapunctus from the talented Cleveland area composer Kevin Foster (who is also a tenor in the ensemble). It is an unaccompanied setting of Versa est in luctum cithara mea (“My harp is tuned for mourning”) which was a favorite of Renaissance composers, including Victoria and Byrd. The new work is highly contrapuntal and tonal, with excursions to various harmonic centers while always retaining a pulse and musical line. There are ecstatic repetitions of Parce mihi Domine (“Spare me, Lord”). The piece has the virtue of being accessible but is challenging enough musically to make me want to hear it again. I hope that Contrapunctus will keep it in their repertoire. The composer received a warm response for his work.

This concert was an embarrassment of riches, teetering on the brink of being too much, with too many pieces trying to cover too much musical territory. Had the performances been any less expert, it would have been too long. Nonetheless, the musical values of this program were high, and we can look forward to Contrapunctus’s future endeavors.

END_OF_DOCUMENT_TOKEN_TO_BE_REPLACED

Rodgers & Hammerstein’s Cinderella was originally produced for television in 1957 — seven years after the animated Disney film was released — and starred Julie Andrews. According to the Rodgers & Hammerstein website, it was viewed by over 100 million people. END_OF_DOCUMENT_TOKEN_TO_BE_REPLACED

The story line has its origin in an 1855 play and an 1842 farce that Thornton Wilder mined for his 1938 play The Merchant of Yonkers. When that turned out to be a flop, in 1954 Wilder made the crucial decision to re-center the show around the character of the legendary marriage broker Dolly Gallagher Levi and renamed it The Matchmaker. END_OF_DOCUMENT_TOKEN_TO_BE_REPLACED

The Dodero Center for the Performing Arts at the Gilmore Academy in Gates Mills is one feature of an impressive campus. The auditorium is shallow, the stage is deep, and the ensemble played without a shell. Throughout the program, the sound, especially in instruments’ lower registers, tended to disappear. END_OF_DOCUMENT_TOKEN_TO_BE_REPLACED