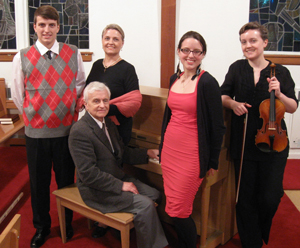 Youngstown composer Richard Zacharias’s All Right, Time to Go, ironically opened the evening with intriguing back-and-forth monologues between violin (Natalie Sahyoun) and piano (Alison Morris) who only later joined in dialogue. Both in the opening work and in Zacharias’s Duo Two (a first performance), the pairs of instrumentalists seemed to be trying to start up a conversation but communication proved difficult. Duo Two was distinguished by strong horn playing from Stephen Klein, with the fine assistance of pianist Maria Fesz.

Yanda Zhu was represented by two premieres — Playful Dolphins in the first half (with Christopher Nutter, clarinet and Jerry Rezanka, piano) and Cat Tango, which ended the second (with violinists Mariana Szalaj and Natalie Sayoun and pianist Alison Morris). Dolphins featured leaping, lyrical lines over colorful, Gallic harmonies. Cat Tango had something of a middle-eastern flavor, beginning more like a waltz before discovering its inner sultriness. The musicians gave strong readings, Nutter ably nailing some difficult high notes.

Robert Rollins’s Musicians Wrestle Everywhere from his Three Songs on Poems by Emily Dickinson brought soprano Dorota Sobieska and pianist Jacek Sobieski back onstage. A rather abstract, atonal setting of Dickinson’s transcendent text, Musicians took Sobieska into the vocal stratosphere with vocalises and long chains of sospiri motifs and ended with very high tessitura, all of which she managed easily with strong support from Sobieski.

A second Rollin piece, Pearls Variations (first performance), based on a Yiddish folk tale, featured the eloquent violin soloist Ethan Howard, who introduced the narrative and was later joined by string orchestra in Celtic-flavored textures which grew more and more complex as the attractive six-minute work unfolded. The two Rollin works were separated by Boston composer Arthur Foote’s (1853-1937) Irish Folk Song, a charming trifle nicely played by the strings.

Carol Ann Smolka’s affecting work, I Am Not Dumb Now from Images of Helen Keller, receiving its first performance, drew a variety of string effects from the orchestra — pizzicatos, strong separated downstrokes and chords and violent tremolos.

A memorial moment followed for the late composer Tim Webb as Ethan Howard returned to play the second movement of Webb’s Samson Suite with the orchestra, a beautiful, Celtic-tinged, elegiac piece with simulations of pealing bells at the end.

Time stopped — as Messiaen would have wanted — when organist Sean Baran skillfully played the French composer’s La Verbe from La Nativité du Seigneur. The work begins with striking dissonant chords but soon devolves into a calm vision of eternity of some ten minutes’ duration.

Dorota Sobieska and Jacek Sobieski returned in the second half for three of Karol Szymanowski’s Twelve Songs from Kurpie, colorful settings of dialect poems that the couple had performed with their Opera Circle Company in Cleveland in 2007 in conjunction with Verlezza Dance. Their insightful performance was riveting and was followed by Jacek Sobieski’s dazzling account of the outrageous Toccata from the Second Piano Sonata of Grazyna Bacewicz (1909-1969), one of Poland’s groundbreaking woman composers.

Published on ClevelandClassical.com May 8, 2013

Music director and conductor Daniel Meyer built his playlist around Cleveland themes and scenes. “Exploration CLE” made use of engaging selections from the classical canon and beyond that celebrated “what makes Cleveland so special.” Happily, he and his musicians avoided constructing a visual slide show, choosing to let the music speak for itself. END_OF_DOCUMENT_TOKEN_TO_BE_REPLACED

You could see the relationship at work on a practical level. Repertoire for two players at the same piano requires a certain choreography. There’s just one of each pedal to share, and the hand crossings left and right — which can be so fun to watch a soloist pull off — get more complicated when another person’s involved. At times, Pompa-Baldi drew a hand away from the keyboard and into his body, making room for Friscioni, and at the close of a few delicate phrases, the two were crouched together over the same final notes at one end of the instrument. END_OF_DOCUMENT_TOKEN_TO_BE_REPLACED

The signature sounds of these famous film scores are not so much John Williams’ invention as allusions to other classical pieces. The foreboding half-step from Jaws, growing more and more furious in the cellos and basses, shares something with Dvořák’s “New World” Symphony and Bartok’s Miraculous Mandarin. END_OF_DOCUMENT_TOKEN_TO_BE_REPLACED