In residence at KSU’s Glauser School of Music since 2004, the Miami String Quartet — Benny Kim and Cathy Meng Robinson, violin; Scott Lee, viola and Keith Robinson, cello — began with a profound performance of Beethoven’s String Quartet in f, Op. 95 “Serioso” which was notable for its contrasts between the rhythmically aggressive and the lyrical. A remarkable degree of tonal variety and color was achieved by each member of the quartet, adding much to their expressive delivery. The players dug into the opening Allegro con brio movement with a great sense of balance and control, making the most of Beethoven’s subito shifts in dynamics and mood and punctuating accents.

The yearning and aching dissonances of the second movement Allegretto ma non troppo created a restless, unsettled harmonic sense while dotted rhythms urged the third moment Allegro assai vivace ma serioso forward with rich and colorful harmonic surprises. The Larghetto espressivo – Allegretto agitato brought the piece to an exciting conclusion, and in the words of Basil Lam, “this comic-opera ending is absurdly and deliberately unrelated to the ‘quartet serioso’ — the true Shakespearean touch that provides the final confirmation of the truth of the rest.”

The String Quartet No. 9 in E-flat, Op. 117 by Shostakovich took us to an entirely different sound world which included harsh gliding notes, biting emphatic chords and themes based on the twelve notes of the chromatic scale. The five movements — Moderato con moto; Adagio; Allegretto; Adagio; Allegro — received a reading with a vast range of expression and communicative qualities. Characteristic of the composer, fragmentary melodies, sustained chords, repeated notes, impish galloping, sotto voce effects, declamatory pizzicati and more abounded and it was all brilliantly realized by the musicians.

Spencer Myer, Gold Medalist of the 2008 New Orleans International Piano Competition and laureate of The Cleveland International Piano Competition, joined Kim, Lee and Robinson in the four-movement Piano Quartet in A, Op. 26 by Brahms. Eloquent and noble, the performance blossomed with freshness and lyrical beauty. An optimum balance between the piano and strings was achieved as Mr. Myer deftly discerned what should be prominently heard and what should remain in the background as texture, harmonic cushion and pulse. There was excitement in the tossing back and forth of the chordal sections between piano and strings in the opening Allegro non troppo and the hushed opening of the Poco adagio was lovely, contrasting effectively with the impassioned cries later in the movement. The Scherzo: poco allegro – Trio was buoyantly playful with sections of drama and the Finale: Allegro was rollicking with its accents and syncopations. 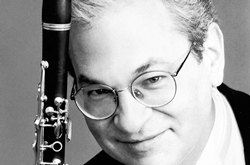 Saturday evening’s recital by Kulas Guest Artist David Shifrin, clarinet, and pianist Spencer Myer included a mix of musical styles in works by Schumann, Brahms, Stravinsky, Poulenc and Debussy. Schumann’s three pieces which comprise Fantasiestucke, Op. 73, and Brahms’s Sonata for Clarinet and Piano in f, Op. 120, No. 1 made up the highly romantic first half of the program. Teeming with supple phrasing and nuance, clarinetist and pianist matched subtle interpretive and dynamic levels sublimely while engaged in musical dialogue.

After intermission Shifrin played a clear and colorful Three Pieces for Solo Clarinet by Stravinsky, short monologues which in turn explore the clarinet’s lower register, imitate jazz improvisation and revisit the tango. Then came a marvelous performance of Poulenc’s Sonata for Clarinet and Piano, played with wit and charm within wondrous piano effects.

Long lyrical lines undoubtedly inspired arrangements for clarinet of two solo piano pieces by Debussy: The Little Shepherd (from Children’s Corner Suite) and Girl with the Flaxen Hair (from Preludes, Book II). Creamy legato, articulation and control of every sound were at the service of musical expression in these beautifully played miniatures.

As a test piece for solo wind instruments in the 1910 competition at the Paris Conservatory, Debussy composed his Première Rhapsodie for clarinet and piano to display the performers’ tone in the slower lyrical section and to display their dexterity in the brighter section. Shifrin played with panache, negotiating every turn easily and beautifully while Myer created a beautiful aura of sound and underlying pulse.

Rossini’s opera buffa-like Theme and Variations served as an encore and Shifrin wowed the crowd with his dazzling technique. He tossed it off with supreme musicianship, coupled with some dramatic input by way of subtle facial expressions and physical gestures.

The music isn’t easy to play, either. Over the course of two hours, all of the musicians brought fantastic focus to the unrelenting tricky rhythms and countless layers of parts, all of which require a high level of individual responsibility. Even in the moments of calm, the accompaniment remains perpetually unsettled. Adams — who made a sprightly presence on the podium — combines minimalist, repeating motives in gradual layers, which eventually become so dense they overwhelm the senses. Lisa Wong deserves special mention for her thorough preparation of the Cleveland Orchestra Chorus, as does Jennifer Rozsa for the Children’s Chorus, which made a brief but memorable appearance in the last few minutes. END_OF_DOCUMENT_TOKEN_TO_BE_REPLACED

Warner was a fitting choice not just symbolically, but also sonically. The combination of Baroque strings, theorbo, harpsichord, and organ created a nice blend and balance, allowing the opportunity for softer instruments to stand out. In Johann Rosenmüller’s Sonata à 5 in g, Doug Balliett’s violone pizzicatos resonated beautifully, and in Johann Heinrich Schmelzer’s Sonata in d, harpsichordist Elliot Figg became an equal player in the texture with his clever improvisations. The slight exception was Joshua Stauffer on theorbo — despite the instrument’s big physical presence on stage, he received little time in the spotlight. END_OF_DOCUMENT_TOKEN_TO_BE_REPLACED