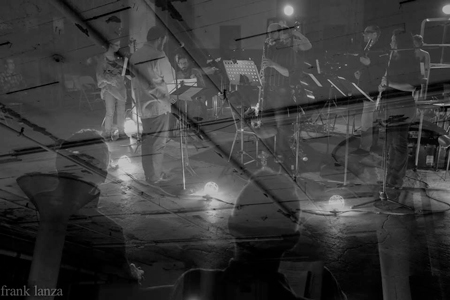 Anyone familiar with FiveOne Experimental Orchestra knows one thing: no concert will be like the last one. With their “no-boundaries” approach to music, this inventive group has a knack for creating happenings. They regularly incorporate artistic disciplines such as sculptors, filmmakers, dancers, and visual artists into their concerts. And they stand by their mission to present their concerts in unusual spaces like the Sculpture Center and the East Cleveland Township Cemetery.

On Saturday, Saturday, April 5 as part of NEOSonicFest, FiveOne Experimental Orchestra outdid themselves during their performance at The Screw Factory in Lakewood. And once again, it was a happening.

The Screw Factory is a massive complex that once served as the home of the Templar Motor Company. It later became a production facility for nuts and bolts, hence its name. Today it is home to an electrical wire manufacturer while the second and third floors serve as artists’ studios.

Saturday’s concert took place on the second floor in a large, open, cavernous space with the performers placed in the center and the audience seated on three sides. With a bar off to one side, fork lifts on the sides of the stage and illumination provided by large industrial lamps, the somewhat gritty atmosphere actually felt welcoming.

Prior to the concert, FiveOne artistic director John HC Thompson welcomed the large and extremely diverse audience to this “Post-Industrial Cathedral” and encouraged everyone to move around and experience the orchestra from different points of view.

Beginning the program was Missy Mazzolli’s Still Life with Avalanche, which she describes as “a pile of melodies collapsing in a chaotic freefall.” Commissioned by eighth blackbird, the Mazzolli creates a sonic landscape over a drone played by harmonicas. FiveOne’s flutist Jeiran Hasan, clarinetist Anthony Slusser, violinist Chiara Stauffer, cellist Michael Tavani, pianist Wen-Ting Ong and percussionist Dylan Moffitt performed the rhythmically intricate work with authority and nuance. Mazzolli is an intelligent composer whose works are a staple of new music concerts and it’s great that FiveOne included her music in the festival.

Michael Laurello’s Tell Hope Everything You Hear for guitar and tape (with recorded playback heard through speakers both left and right) is quite an interesting piece consisting of a series of motives that develop, then stop and begin again. Guitarist Joshua Stauffer negotiated the work’s tricky technical passages with aplomb.

Following David Crowell’s translucent Waiting in the Rain for Snow, the first half concluded with Matthew Frederick’s slow, smooth and jazzy arrangement of Phantasm from Flying Lotus’ album Until the Quiet Comes.

The second half began with a signature of FiveOne, a performance of a totally improvised work. Saturday’s edition was used as a prelude to Jordan Nobles’ Simulacrum, a work also based in improvisation with a leading line that can be played by any instrument. Each line has 20 accompaniment cells that the rest of the players can choose from to play. While there were many well-played solos throughout, bassist Joel Negus was a standout. Unfortunately, Simulacrum simply overstayed its welcome.

In introducing Judd Greenstein’s Sing Along, John HC Thompson said they chose it because it was a great show closer, and indeed, the uplifting and fresh sounding work brought evening to a fine conclusion.

This was a great evening of music making. Although the acoustics are very “wet”, as a performance space the room works well. Thanks to Five One for seeking it out.

Published on ClevelandClassical.com April 9, 2014.
Click here for a printable copy of this article.
Return to the Web site.

END_OF_DOCUMENT_TOKEN_TO_BE_REPLACED

The Orpheus myth inspired French Baroque composers Jean-Philippe Rameau and Philippe Courbois to write expressive solo cantatas about the famous Greek musician-poet and his futile attempts — because of his own impatience — to rescue his beloved Eurydice from the grasp of Pluto in the Underworld. These are beautifully performed by the clear-voiced soprano Hannah De Priest and the velvet-throated baritone Jonathan Woody (who makes a walk-on appearance in the Rameau). END_OF_DOCUMENT_TOKEN_TO_BE_REPLACED

Now that live concerts are beginning to proliferate, it was delightful to hear Oberlin cello professor Darrett Adkins ring a change on the solo suite format with his Hypersuite No. 3 on September 28 in the Cirigliano Studio Theatre at Lorain County Community College. His program opened the new season of Signature Series performances in Elyria, and was dedicated to the memory of Eva Hornyak. END_OF_DOCUMENT_TOKEN_TO_BE_REPLACED