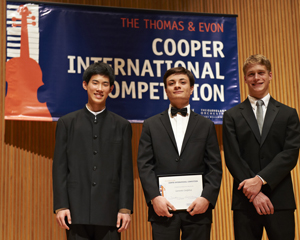 The prize money for the three top winners in the Oberlin Cooper Competition is impressive, but the opportunity for teenaged pianists to play full concertos with The Cleveland Orchestra has to be, as the credit card commercial put it, priceless. They had that opportunity during the Final Round of the competition on Friday evening, July 27, in Severance Hall, in front of a live audience, radio and Internet listeners over WCLV and a panel of distinguished judges.

During a grueling week’s worth of semifinal, concerto and recital rounds at the Oberlin Conservatory of Music, the original draw of competitors had been gradually winnowed down from thirty-three to sixteen, then to ten, to six and to three. Earlier in the week, it seemed statistically possible that the final round might include three performances of Rachmaninov’s second concerto, but that didn’t happen. The final three, 17-year-old Micah McLaurin (right) from Charleston, S.C., 15-year-old Xiaoyu Liu (left) from Montréal, and 16-year-old Leonardo Colafelice (center) from Bari, Italy, would play one Chopin and two different Rachmaninov’s for the panel of judges to determine the ranking of their prizes.

Other kinds of competitions are easier to quantify. Competitor “A” measurably ran faster, jumped higher or longer or got one more ball across the net than competitor “B”. But how do you tell who played one piano piece better than another when different musical styles are involved? Panels have famously been wooed by pianists who played faster and louder than the rest, but the Oberlin judges undoubtably have their minds on higher matters. By this point, the top survivors will have proven their technical prowess beyond any reasonable doubt and the laurels should go to those who interpreted their individual concerto in the most musically convincing way.

Chopin’s second concerto is a forest where many pianists have gotten lost among the trees, failing to discover the musical arch that sustains the extravagantly decorated solo part. Mr. McLaurin’s elastic and poetic playing was beautiful and well organized, if episodic. But he projected the solo line well over the ensemble and his voicing was elegant. His interaction with Ling and the orchestra went in and out of focus — at times he seemed almost not to notice that he had several dozen colleagues to tune into and play off of.

Ziaou Liu was in charge of Rachmaninov’s second concerto, and he had already filed his flight plan on Tuesday evening during the concerto round with the assistance of a second pianist. I thought that while it was fascinating and compelling, its chapters didn’t quite add up to a book. The partnership with an orchestra on Friday evening provided Mr. Liu with more opportunity to craft a thrilling narrative. He played flawlessly and brilliantly as a true colleague. The only disappointment came when his own sounds were engulfed by the orchestra. Loud and well-deserved cheers exploded from the audience at the end.

After intermission, Leonardo Colafelice also enjoyed the inspiration of a full palette of orchestral color in Rachmaninov’s third concerto. While I thought his first movement lacked some coherence on Tuesday evening, everything made sense on Friday. Mr. Colafelice seemed to be in a zone, communicating importantly with Jahja Ling and the orchestra while masterfully crafting a solo line that cut through the densest orchestral textures and was at times an urgent personal statement, at other times a congenial colloquy. More loud and well-deserved cheers greeted his triumphal final cadence.

Jahja Ling and The Cleveland Orchestra gave splendid support to the young players in all three concertos — and once or twice, their long experience stepped in to bring focus to a blurry moment.

Though the ways of competition juries are often mysterious — we were surprised that at least two highly musical pianists weren’t among the six who advanced to the recital round — the Oberlin judges understandably voted Mr. Colafelice the first place winner, followed by Mr. Liu and Mr. McLaurin. Fully impressive as each of their individual accomplishments was the sense of camaraderie all the Cooper competitors exhibited this week. Those who were eliminated showed up to cheer on those who advanced at every stage.