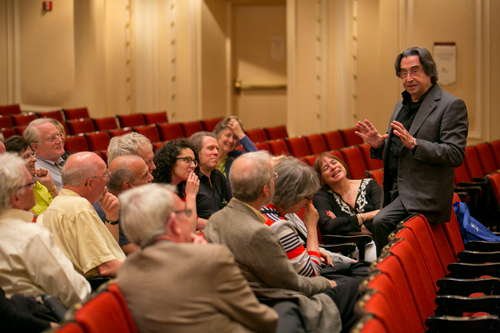 ClevelandClassical staffers Mike Telin, Daniel Hautzinger and myself were among the thirty-three members of the Music Critics Association of North America who gathered in Chicago from June 17-19 for the association’s annual meeting.

Hosted principally by the Chicago Symphony Orchestra, the three day gathering included two CSO concerts led by music director Riccardo Muti; a concert by the Grant Park Orchestra in Millenium Park (first evacuated then shortened because of threatening weather); seminars on subjects ranging from the future of classical radio and writing for online publications to the Chicago Symphony and its sound; a tour of Lyric Opera; and an open CSO rehearsal followed by a meeting with Maestro Muti.

Wednesday afternoon’s CSO rehearsal was devoted to Schubert’s fifth symphony, providing a rare opportunity to see one of the world’s pre-eminent conductors work with his resident ensemble. Muti’s affable, avuncular manner was in full evidence as he stopped the music to work on some details he wanted to be more audible, and lines he wanted to be played more lyrically.

Afterwards, he spoke to the assembled critics on a range of subjects including the important role critics can play in advancing the cause of classical music, and his peace-through-music initiatives in troubled areas of the world, charmingly fielding questions well beyond the allotted 45 minutes. 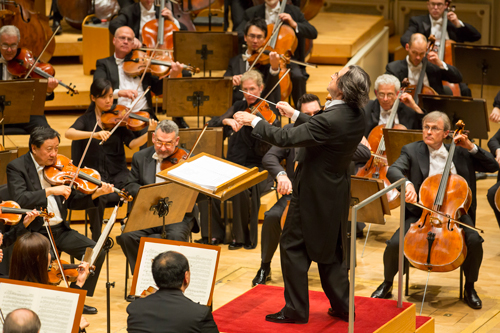 On Thursday evening, the CSO played Schubert’s relatively tiny fifth symphony and Mahler’s gigantic first symphony to a near capacity audience in Orchestra Hall. An unusual pairing, perhaps, but both composers were consummate song writers, and Schubert’s concentrated narrative, full of harmonic surprises in a little space, held up well to Mahler’s spacious sonic panorama.

Muti generally let the opening movement of the Schubert play itself, lavishing his attention on the second, where he had plenty of expressive details to bring out. Did he stretch the ending beyond its tensile strength? Perhaps, but Schubert’s music was up to it. Muti and the orchestra emphasized the beginning of modulations in the minuet and blazed through the finale at a thrilling pace, zinging accented notes and dialing down the energy but not the tempo for its more lyrical sections. Everything Muti asked for in rehearsal came through in the performance. 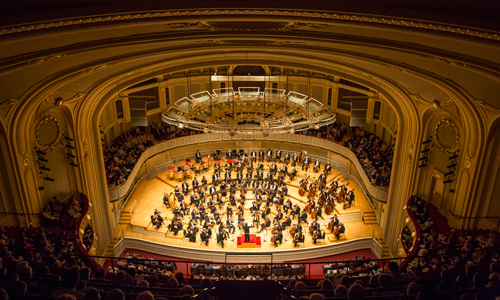 Given the CSO’s reputation for brilliance in the big works of the repertoire, everyone was waiting to hear Mahler 1 live. Muti rolled out the first movement with tantalizing, almost static slowness, a mood he returned to in its denouement. Offstage trumpets made a fine effect, and climaxes were electrifying. The brashness of the CSO horns set the stage for a swaggering second movement.

Principal bass Alexander Hanna sounded so sweet in Mahler’s distortion of the Bruder Martin tune at the beginning of the third movement that he might have been playing cello instead. Fine transitions between sections helped join disparate ideas like woozy Klezmer music together into a plausible if fantastical dream.

The cataclysmic opening to the finale yielded to a wonderful reprise of the (now missing) Blumine movement by the full string section — the lushest string sound of the evening — and after other repetions of earlier material, to a halting and eventually stunning finale. The photo of the horn section should come with an audio track. 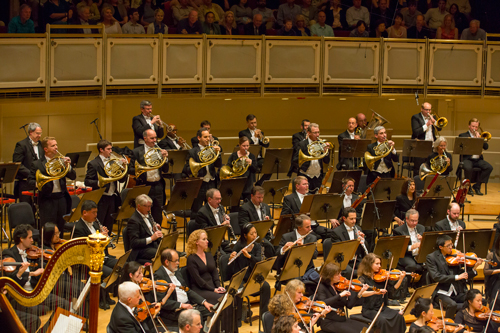 Muti paced the symphony skillfully, conveying his interpretational signals with great economy of gesture. The ovation was tremendous, and the conductor was generous with solo bows, even wading into the bass section to give a special pat on the cheek to Alexander Hanna.

It’s always intriguing to hear an orchestra live for the first time in its home venue. Orchestra Hall is not without its acoustical eccentricities. Bass response, and balance and blend among sections (the CSO plays on risers), are items that haven’t been completely solved here. But the ensemble is unquestionably among the great orchestras on the planet, and Riccardo Muti was a splendid choice to lead the CSO into the next chapter of its long and distinguished history.

Photos by Todd Rosenberg courtesy of the Chicago Symphony Orchestra.

Jackson began the program with a recitation of Langston Hughes’ poem “Helen Keller” — the first of five poems by Hughes that served as interludes between each piece on the first half. END_OF_DOCUMENT_TOKEN_TO_BE_REPLACED

Pianos with pins and tape on strings, a bass drum and tam tam, crotales, Almglocken, and vibes. Microphones were hooked up all around the instruments. The feed was sent to speakers around the room. Lighting designer Nicholas Houfek hung incandescent globes over the arrangement of instruments from thin black wires stretching across the beams. END_OF_DOCUMENT_TOKEN_TO_BE_REPLACED

From the podium, Elim Chan set an ambitious tone for the evening. The rising star conductor, here in her Cleveland Orchestra debut, has a commanding style, and every twist and turn in Saturday’s performance tracked closely with her baton. END_OF_DOCUMENT_TOKEN_TO_BE_REPLACED