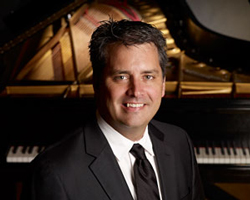 Though pianist Robert Cassidy, formerly on the faculties of The Music Settlement and Cleveland State University, decamped last spring for California to join his wife at the Music Academy of the West, he remains committed to Northeast Ohio as pianist with the Almeda Trio and plans to travel to Cleveland for concerts with that Music Settlement-based ensemble.

On Friday evening, September 5, Cassidy returned to the area to play a solo recital at First Unitarian Church of Cleveland in Shaker Heights, enroute to solo appearances at the Church of St. Mary The Virgin in New York and the Peterskirche in Vienna. His local performance boded well for his subsequent recitals. He presented a thoughtful, well-balanced program, playing with elegance and a keen sense of style.

Cassidy began with a compelling reading of a striking contemporary work, David Noon’s Elegy Variations, a six-minute piece that fills its brief space with rapidly-contrasting moods from the elegiac and nostalgic to the angry.

Mozart’s Viennese publisher, Artaria, bundled his Fantasie in c minor, K. 475 with the Sonata in c minor, K. 457 and brought them out in December of 1785 as the composer’s Opus 11. Cassidy also bundled the two pieces together on his recital, allowing K. 475 to flow directly into the first movement of the sonata. It was a plan that worked. Cassidy played the Fantasie in an improvisatory style and brought out the drama and pathos in the Sonata, mining the depths of two works that represent unusual excursions by Mozart into a minor key.

He concluded the evening with well-voiced and idiomatic performances of the three intermezzos and rhapsodie from Brahms’s Vier Klavierstücke, op. 119.

Conditions were not ideal. The evening was hot and muggy, and the church is not climate-controlled (ushers passed out “personal air conditioners” which kept the audience busy fanning themselves as quietly as possible, a solution unavailable to the soloist, whose hands were otherwise occupied).

Then came the distraction of a mini-explosion midway through the second work on the program: a tire blew out on a wheelchair in the front row with all the drama of a gunshot. Cassidy stopped in mid-bar, inquired whether the occupant was OK (she was) and calmly resumed after she sweetly inquired if he could “back up a little.”

Such are the vagaries of performing in church sanctuaries and Cassidy gets extra points for rising well above those circumstances on Friday evening. The audience agreed, put down their fans, and gave the pianist a spirited ovation. The recitalist responded with an affectionate, lyrical performance of the second Intermezzo from Brahms’s op. 118.

Joining a long list of arrangers, Parker Ramsay has now transcribed the Variations for the modern pedal harp, an instrument for which he holds a master’s degree from Juilliard, in addition to a degree in history from Cambridge University, plus a master’s in historical performance (organ and harpsichord) and an artist diploma (organ) from Oberlin. END_OF_DOCUMENT_TOKEN_TO_BE_REPLACED

As organizations gingerly take steps to open up for business, it’s refreshing to have new content to listen to and write about after a solid six months of archival footage. END_OF_DOCUMENT_TOKEN_TO_BE_REPLACED

END_OF_DOCUMENT_TOKEN_TO_BE_REPLACED

Over the past few years, Brian Giebler has visited Northeast Ohio in settings both orchestral and choral, and with repertoire as diverse as Stravinsky, Bach, and the local premiere of a new work. In his impressive solo recording debut a lad’s love, released on Bridge Records, the New York City-based tenor turns his focus to British songs from the first half of the 20th century — a mix of cycles and individual works — and tops off the playlist with a touch of the modern. END_OF_DOCUMENT_TOKEN_TO_BE_REPLACED

To steal a phrase from the third-century Greek philosopher Sextus Empiricus, the mills of the gods grind slowly, but they grind exceedingly fine. The same goes for Deutsche Grammophon. It’s been a dozen years since they were recorded in Hamburg in 2009, but the German company has now issued fifteen Rachmaninoff piano pieces magnificently and poetically played by Sergei Babayan. END_OF_DOCUMENT_TOKEN_TO_BE_REPLACED

END_OF_DOCUMENT_TOKEN_TO_BE_REPLACED

After considering all its options, Cleveland’s period ensemble Les Délices decided to fully embrace the idea of creating pre-recorded “shows” in the place of live, in-person performances this season. END_OF_DOCUMENT_TOKEN_TO_BE_REPLACED